Maine Audubon gathers information about the common loon every year to understand trends in their population and of our lakes. 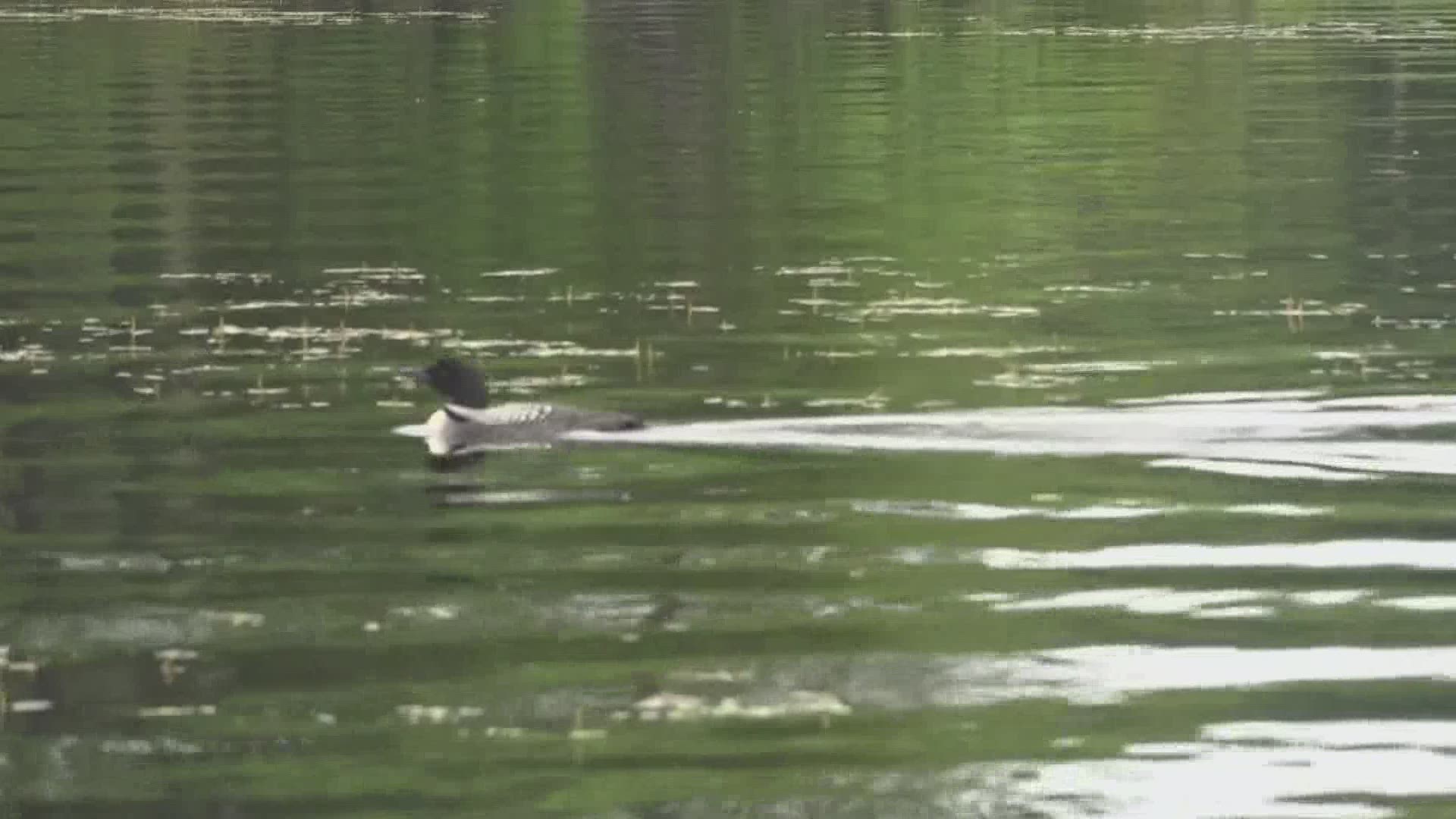 HUDSON, Maine — More than 1,000 volunteers participated in this year's annual Loon Count Day. The count takes place in more than 300 lakes in Maine. The goal is to study threats to loons and engage volunteers across Maine in conservation efforts.

"We expect similar or even higher numbers this year now that some of the participants who participate from out of state are able to be here in Maine," said Tracy Hart, Wildlife Ecologist at Maine Audubon.

"They are a good indicator of how good the quality of the lake is," said Richard Dressler, biologist and volunteer at Pushaw Lake for the count.

It’s one of my favorite days of the year: Loon Count Day!

The goal of this @MaineAudubon annual project is to help track Maine’s Common Loon population, which is also a good indicator of the quality of Maine lakes.

I’ll take you to Pushaw Lake at 6 p.m. on @newscentermaine. pic.twitter.com/CYYlrAE7TN

Hart says the count is important for the protection of Maine's loons because it provides a snapshot of the loon population at the same time each year.

Allowing Maine Audobon biologists to track upward or downward trends in the population over time.

"If we were to see consistent or precipitous declines in the count numbers it would alert us to a problem and the need for additional protection measures. This will be the 38th year that we have been conducting this statewide count," said Hart.

The count engages more than one thousand people each year in learning about and looking out for loons.

"We are looking at reproduction of chicks and so forth and the concern there is what is potentially impacting, this year for example the chick numbers seem to be way down," said Richard Dressler.

"Many participants continue to serve as the eyes and ears for loons on their lake throughout the season and participate in countless activities to help raise awareness about loons and contribute to their conservation--from fish lead-free campaigns to get the lead out of our lakes, to reporting injured loons, to talking to people about human actions that can harm loons or cause them to abandon their nests, to testifying on bills that would help to address some of the threats that loons face in the state," added Hart.

"We've been doing it for a long time and one of the trends we have noticed is the increase of boating has had an impact on the numbers," said Marian Dressler.

People who enjoy Maine lake water should obey the no-wake law within 200 feet of shores or islands, to protect the wildlife that lives in it, like the common loons.

Hart says this is the second year in a row that the adult population has shown some decline.

"We're paying attention to that finding, but are also taking it in context. It takes 3-5 years to determine real downward trends, so it's too soon to know if we are seeing an adult population decline. And this estimate of almost 3,000 adult loons is still nearly double the 1,500 adult loons estimated as the population when the loon count began back in 1983. So Common Loons in Maine still appear to be thriving, despite a number of threats," said Hart.

"Loons can catch fish that have swallowed lead tackle or they can pick up discarded or lost lead tackle from the bottom of the lake, mistaking it for a pebble. Loons take pebbles into their gizzards or crops to help them break down their food. The incidences of loon lead poisoning is declining in the state (down from 32% of adult deaths before the the lead tackle ban to 21% on average from 2003-2016, the period following the state ban on the use and sale of lead tackle weighing an oz. or less or measuring 2 1/2" or less, and the introduction of Maine's Fish Lead Free outreach initiative in 2013. In 2019, lead poisoning accounted for 18% of adult loon deaths in the state, so the decline appears to be continuing. Since 2020, Maine Audubon has also worked with DIFW and local retailers to sponsor a Lead Tackle Buyback Program," said Hart.

Click here for more detailed information on that report.

Another factor that affects the population of the loons is trauma from collisions with boats. Hart says In 2019, trauma accounted for 29% of adult loon deaths according to necropsy results, passing lead poisoning as the leading cause of death. In the 25-year study from 1987-2012, blunt trauma such as from a boat strike accounted for just 9% of overall deaths (another 4% were from other loons, and another 6% of trauma deaths were unknown cause).

"Enjoy loons from afar and back away if you see any stress behaviors so loons and people can enjoy the lake. A loon crouching on its nest with its head flat is a stressed loon. A loon moving away, vocalizing or flapping its wings for no other reason, or doing what we call the penguin dance or wing rowing is also a stressed loon," said Hart.

This outdoor tradition helps biologists, state officials, and Maine lake users understand more about the loons’ status and the health of Maine’s lakes.

"Maine is fortunate to house the largest Common Loon population in the Northeast and the Annual Loon Count is a vital part of Maine’s efforts to safeguard this population," said Hart.