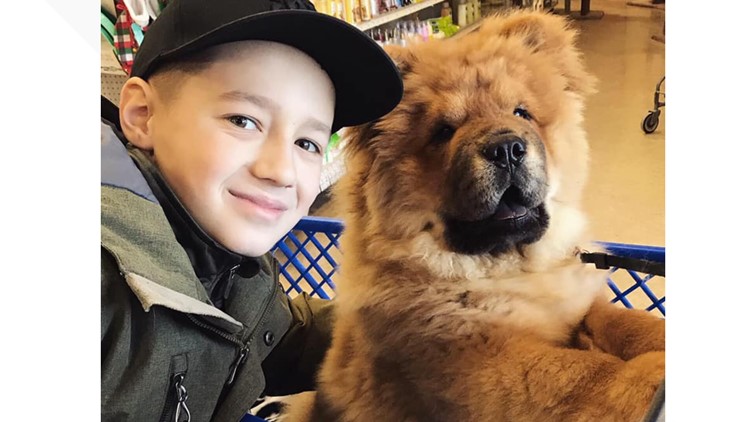 ONTARIO, Canada — As soon as Kashton “Kash” Weinber could walk, he was walking dogs.

Rather than cuddling stuffed teddy bears, the young animal lover snuggled up with cats.

When he began reading, he was nose-deep in thick animal biology books.

It’s common to find him striking up conversations on the importance of preserving the pangolin, a type of anteater on the brink of extinction due to trafficking.

But Kash didn’t just love animals – they loved him.

“He [always] seemed to be one of those people that animals naturally gravitate and flock to,” said Kash’s mother, Jules Gendron.

Animal shelters would call Kash when an exotic animal came in because they knew he would not only be thrilled but would have a calming influence on anything from a python to pangolin.

The now 10-year-old was born with a deep love of all animals, but it’s not just his knowledge of any variety of species that’s impressive, it’s his drive to help the living creatures of our world.

While a respect for animals runs family wide in the Weinber-Gendron household, Kash’s determination to help them has been all his own.

Kash was raised volunteering at local animal shelters. But to him, time wasn’t enough.

“Even when we were [volunteering] walking dogs he would say, ‘I want to help with my own money,’” Gendron recalled. “We said the typical parent response of, ‘Your time is plenty.’ But he wanted to do more he said.”

Kash came up with the idea of using another family hobby to fund his determination of helping animals: woodworking.

With the help of his father, Kash learned woodworking skills at age 7. He decided to try and sell his woodworks and donate 100-percent of proceeds back to organizations and shelters helping animals.

His drive led him to hit the streets, canvassing local craft shows and stores to sell his crafts.

What started as an idea has flourished into a booming business. In two years, the idea has become Kash’s Kreations and he has raised over $4,000.

His wooden toy robots or “block bots” have been sold worldwide.

“Each one takes about an hour to make,” Kash said. “It brings kids joy and helps animals at the same time!”

His current business plan has transitioned to donating half of his funds to animals and keeping the other half for supply costs. He also hopes to save money in hopes of fulfilling his dream of opening his own unique animal shelter.

Kash hopes to build a shelter and home on the same land in order to help accumulate abandoned dogs to home life.

He believes many dogs in shelters are overlooked because they’re not “kid or home” friendly. But with a little time, love and care that he would provide with his shelter, he could get dogs adjusted to life inside a home and therefore, adopted.

Additionally, he hopes to one day become a wildlife biologist and conservationist.

In the meantime, the aptly-nicknamed “mini Steve Irwin,” is homeschooled which allows him to spend his time doing what he loves: helping animals.

“He just has the purest heart of gold, I’m beyond proud of him,” said Gendron. “People always ask, ‘Is he actually ten?’”

RELATED: Despite arrival of needed rain, fire threat to soar again in Australia

In light of Australia’s fires killing millions of animals, Kash has transferred his woodworking skills to sewing in order to make pouches for kangaroos and koalas.

His continued efforts for all four-legged, slithering, swimming creatures comes as no surprise to those closest to Kash.

“It really opens your eyes to see the kind of passion he has that relates into a work ethic at ten years old,” Gendron said. “He just always asks, ‘What can I do to help the animals?’”