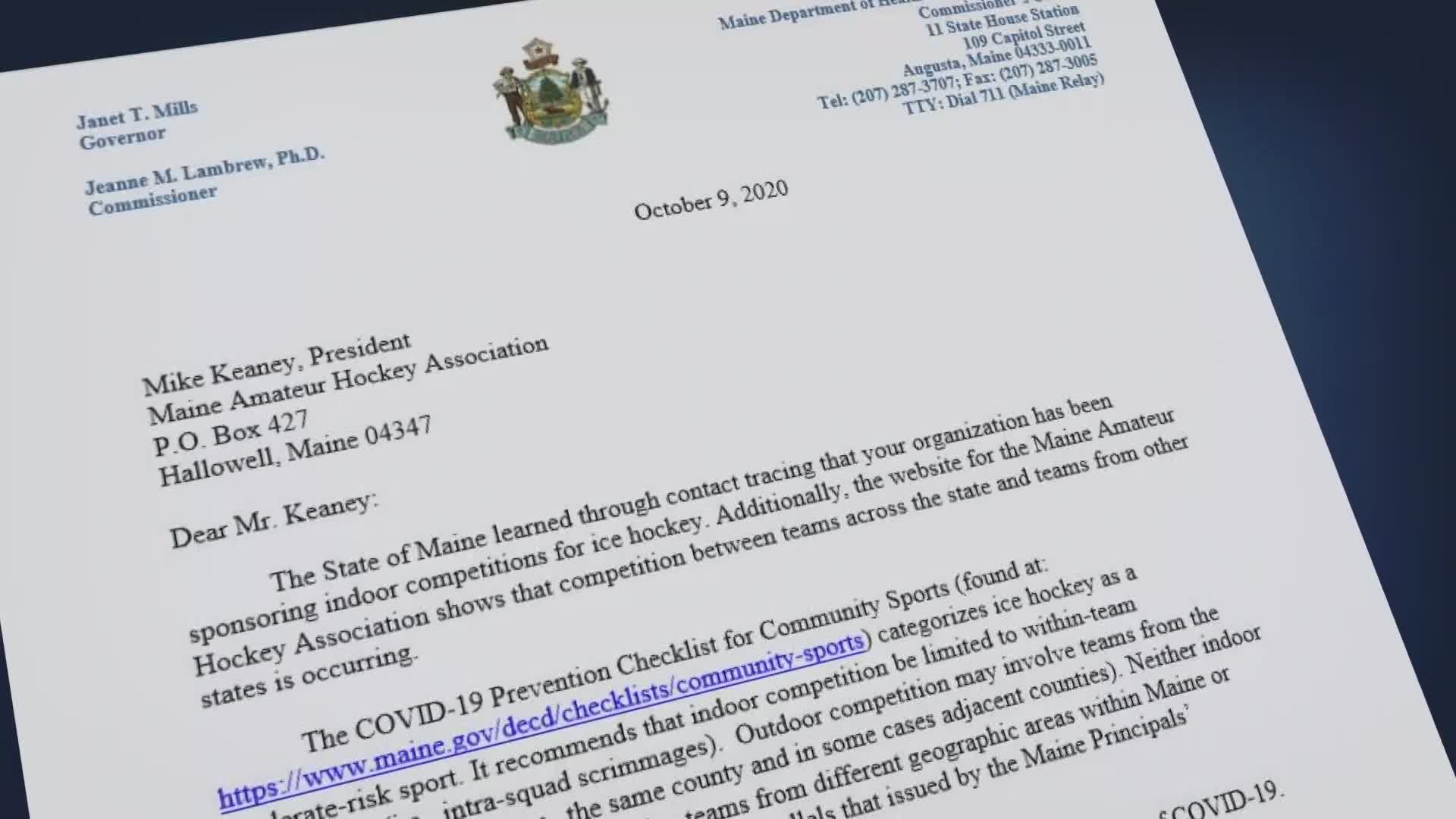 AUGUSTA, Maine — After a weekend of no youth hockey games, parents and league officials are wondering when the next sheet of ice will be available.

Last week, the Maine Center for Disease Control and Prevention (CDC) announced a hockey referee tested positive for COVID-19. The CDC reported the ref worked at games in Biddeford and Yarmouth and Laconia, N.H. during the weekend of Oct. 3 and 4, and up to 400 people could have been exposed.

At Tuesday's CDC briefing, the Director of the Maine CDC, Dr. Nirav Shah said we are now in the timeframe to potentially see an outbreak associated with the ref working multiple youth hockey games.

"At this time, we haven't detected any, but we are just now going into the window in which those cases may occur," Shah said.

After the announcement of a positive case coming from someone involved with the games, the Maine Department of Health and Human Services (DHHS) sent a letter to the Maine Amateur Hockey Association (MEAHA) on Friday.

The letter reinforced the fact that under the state's community sports guidelines, hockey is a moderate risk sport and should only be played amongst individual teams in the form of inter-squad scrimmages and practices.

After the letter was sent, the MEAHA made the decision to postpone or cancel all games this past weekend.

In a follow-up, a spokesperson for the DHHS added:

"The community sports guidelines are strong recommendations designed to ensure the health and safety of those participating. Like any other activity, community sporting events are subject to the limits on gathering sizes and requirements to wear face coverings as directed under the Governor’s Executive Orders"

Matthew Lambert is the President of the Casco Bay Hockey Association. He said since seeing the letter from the state, he has more questions about the clarity of sports guidelines.

“Are these all recommendations and guidelines and we build our program off that? Or is that document from the state, is that the law?” Lambert asked.

Lambert said his players and all those playing youth hockey right now are following strict guidelines that were taken from USA Hockey and local rink recommendations.

They include, no spectators at any games, players must be dressed before games so they don't use locker rooms, and masks must be worn at all times when players are not on the ice.

Hockey also has natural safety measures, like wearing mouthguards and face shields, and in the fast-paced sport, it's hard to have close contact with any player for more than a few seconds.

Tuesday marks the start of Maine's Stage 4 reopening plan, up to 100 people can enter restaurants to eat inside. Lambert said every rink in Maine has more than enough area to spread people out, and rinks have elite ventilation systems to clear carbon monoxide from the Zamboni which is used to clean the ice after games.

“We’re pulling air from outside that feels awfully alike outdoors and if we’re doing that in these big buildings, while we’re wearing masks, and we’re not allowing spectators, we’re hoping to have some sort of resolution there," he added.

While the state reminded the hockey community of its community sports guidelines, many hockey parents said their kids have been playing since the summer with no issues.

"To have it hit that they would no longer be playing was kind of a shock, she said, "because we’ve been playing all summer.”

Greer stressed the importance of sports in the role of her children's' lives. She said the interactions with other kids are vital during this pandemic and added she and other parents will follow any guidelines as long as their kids are still skating.

“Because the health and well-being, mental well-being, of our children is so important," Greer said.

An official with the MEAHA told NEWS CENTER, Maine, the association is meeting tonight to discuss best practices moving forward.

As the high school hockey season approaches, an official with the Maine Principals' Association said the association is meeting with state health officials on Friday and hopes to have a better understanding of what the winter season will look like after.

RELATED: The Maine Mariners will have a 2020-2021 season following the COVID-19 pandemic