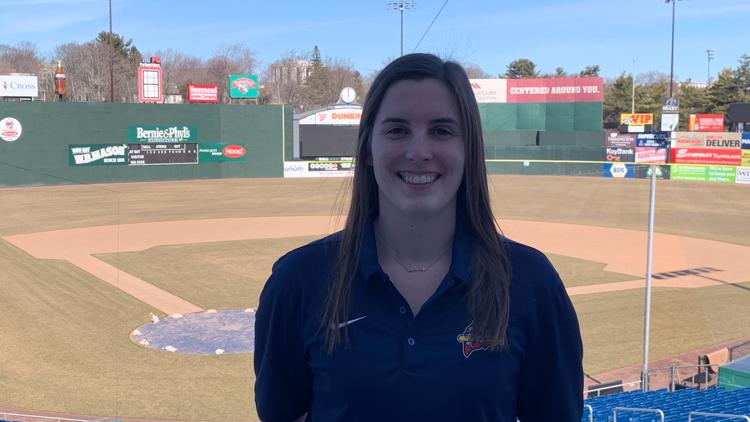 There's a new "Voice of the Sea Dogs"

PORTLAND, Maine — A few weeks ago, Portland Sea Dogs fans found out that longtime broadcaster Mike Antonellis was getting the call up to AAA. Now, there's a new voice at Hadlock Field.

Emma Tiedemann is in Portland and is ready for the baseball season to start.

"Well, the Sea Dogs are very well known around minor league baseball and very enticing to work for in that sense," Tiedemann said. "The Red Sox are a storied franchise as well. They just had all the key components I was looking for."

Broadcasting is nothing new to Tiedemann. Apparently, it's somewhat of a family tradition.

"My grandfather was a broadcaster, so it was a little bit in my blood. I started calling games since I was 15 down in the Dallas area and I fell in love with baseball, just kind of been pursuing that ever since," she said.

Tiedemann has spent the previous two seasons as the Director of Broadcasting & Media Relations for the Lexington Legends, where she called back-to-back South Atlantic League Championships. In 2019, she was honored as the South Atlantic League Media Relations Director of the Year. During the off-season, she served as the voice of Morehead State University Women's Basketball on ESPN+ and radio.

Prior to joining the Legends, Emma was the Broadcast and Media Relations Assistant for the St. Paul Saints, an independent baseball team. She spent 2015 and 2016 in Medford, Oregon as Broadcast and Communications Manager for the Medford Rogues, a collegiate summer team. In 2014, she was part of the broadcast duo for the Mat-Su Miners, another summer collegiate team, in Palmer, Alaska.

RELATED: "Voice of the Sea Dogs" Mike Antonellis gets a big promotion