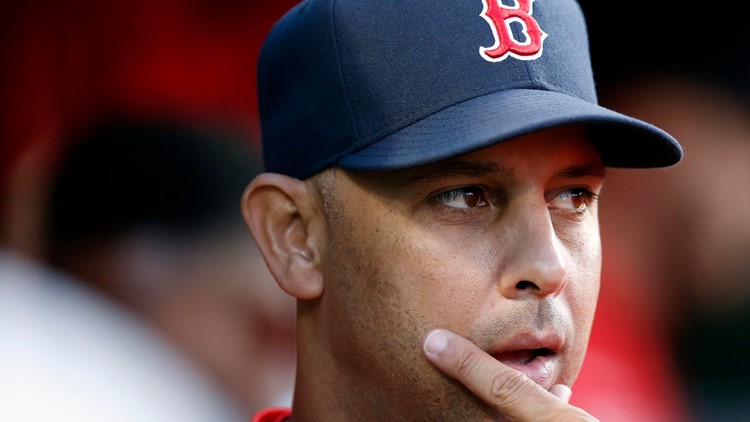 Photo by: AP
Boston Red Sox manager Alex Cora stands in the dugout during the ninth inning of a baseball game against the Los Angeles Angels in Boston, Saturday, Aug. 10, 2019. (AP Photo/Michael Dwyer)

BOSTON — In a press conference on Wednesday, members of the Boston Red Sox leadership team answered questions about what they are calling a mutual decision to part ways with team manager Alex Cora.

Red Sox principal owner John Henry opened the afternoon press conference by saying both Cora and team leaders came to the conclusion that in light of the findings that came out of Major League Baseball's investigation into sign stealing in Houston, Cora could not effectively lead the Red Sox organization going forward. Henry said Cora was professional and respectful in the meeting.

Team chairman Tom Werner said Cora admitted that he played a central role in what went on in Houston and apologized for his involvement. He stressed that the decision to part ways was mutual.

Chief Baseball Officer Chaim Bloom said Cora wanted to reach out to the team first, and informed them of his departure last night. Operations leadership met with coaches and team members this morning and said they are handling the decision well.

Henry, Werner, Bloom and team president Sam Kennedy all spoke about Cora's talent and how much they respect him as a manager. When asked if Cora should manage again in the league, Kennedy said, “Alex is a talented manager, and he expressed remorse and apologized for the embarrassment his actions caused. We’ll see what happens. It’s hard to speculate.”

The Red Sox are now turning their attention to who the next manager of the team will be. Bloom said the team wants to hire a new manager as soon as possible, but there are no firm timelines as of now. "The sooner the better," said Bloom. "We want to have as smooth a spring training as possible."

Bloom also said that installing an interim for the 2020 season has not been ruled out.

Team leaders would not comment on the investigation into sign stealing by the Red Sox during the 2018 season. They asked that fans reserve judgement until the MLB finishes its investigation.