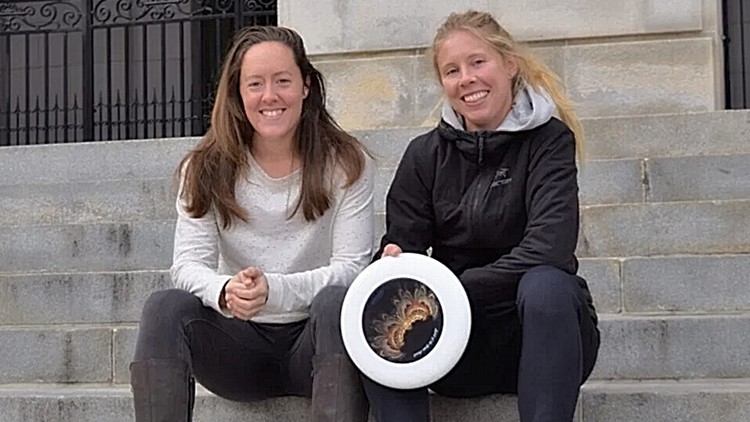 PORTLAND, Maine — Portland is about to get a new pro sports franchise...Ultimate.

Ultimate frisbee, that is.

The Premier Ultimate League announced Tuesday that Portland Rising will be one of four expansion franchises, according to the Portland Press Herald.

The league held its inaugural season of Ultimate frisbee last spring with eight teams spanning from the eastern half of the United States to Colombia.

This marks the first time Maine will host a women’s professional sports team.

Ultimate is a seven-on-seven non-contact sport where the object is to pass a flying disc from player to player until reaching the opposing end zone. The game lasts four 12-minute quarters and draws elements from football and basketball.

The Portland franchise was awarded to two local women with a passion for Ultimate. Maddie Purcell, 29, of Brunswick and Chloe Rowse, 26, of Falmouth are the Portland Rising co-owners, and likely to be playing for the team as well.

Purcell, an entrepreneur who founded the Fyood Kitchen in Portland’s Bayside neighborhood, told the Portland Press Herald, “We see this as an opportunity to show off the talent and caliber of the top (female) players here. We actually have a long-tenured and fairly outstanding ultimate community in Maine.”

The Premier Ultimate League’s standard player salary in 2019 was $40 per game and Portland Rising will hold tryouts to build its roster.

Purcell and Rowse told the Portland Press Herald that they are talking with city officials about using either Fitzpatrick or Memorial Stadium for home games. The league’s schedule runs from April to June.

Purcell said she expects five regular-season games in 2020, with at least three home dates. Ticket prices figure to range from $10 to $20.

Purcell said with enough sponsors, coupled with ticket and merchandise sales, she plans to increase player salaries beyond the $40 level.

Speaking for Purcell and herself, Rowse told the Press Herald, “this is kind of like a dream we never imagined would come true.”

For more information on the team, as well as more on Chloe Rowse and Maddie Purcell, you can visit the Portland Press Herald's website.

RELATED: Video: Simone Biles is a ridiculously good diver, too!

RELATED: Home is where the Hart is for Maine Mariners

RELATED: Maine governor gets a pair of famous footwear