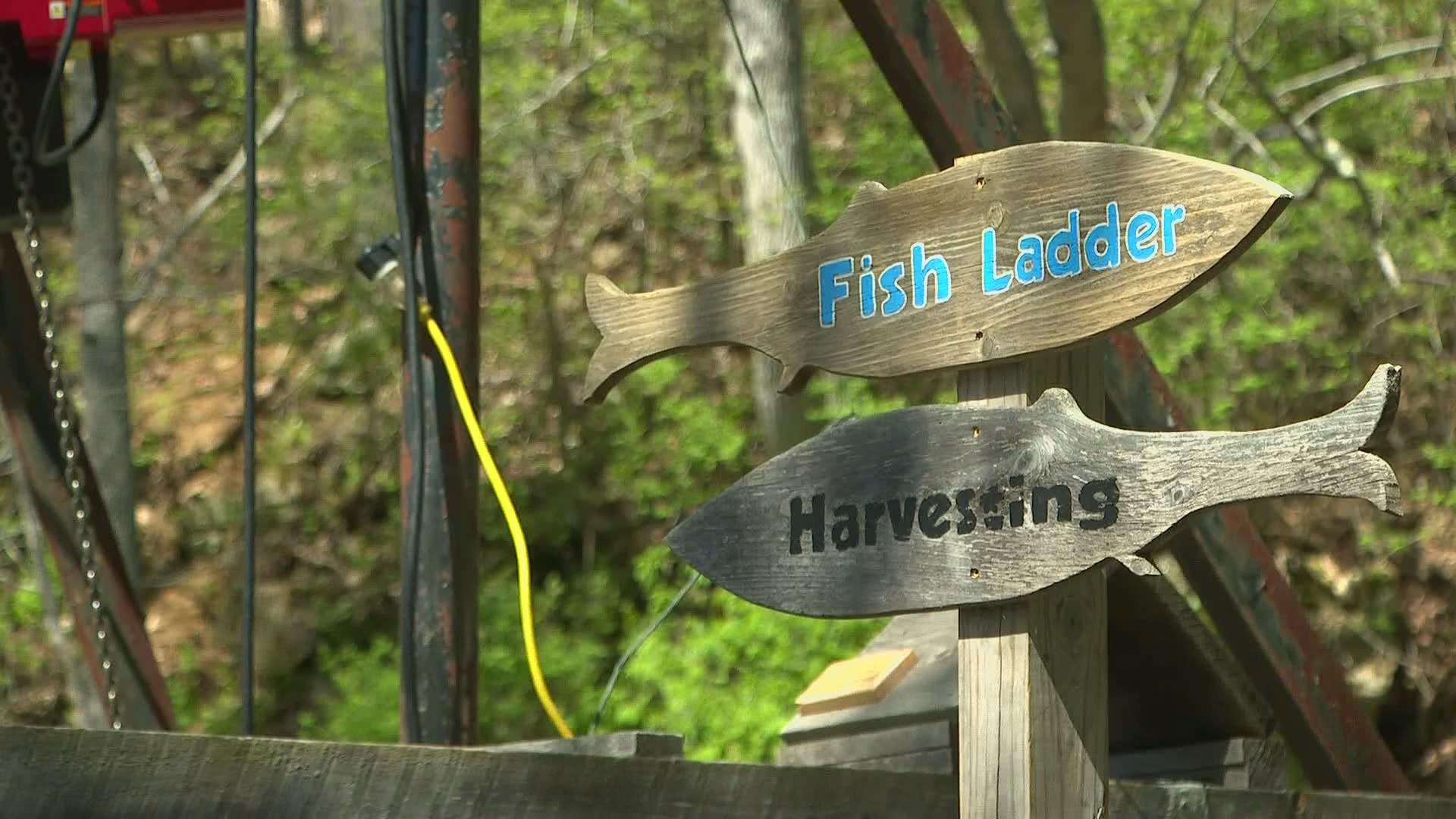 In the small town of Benton, the Essex Hydro dam surprises you with its size. The dam, spanning steep banks on both sides of the Sebasticook River, towers above the water, generating four and a half megawatts of electricity on a steady basis.

But each May, it helps millions of alewives make it upstream to spawn.

Since 2006 the hydro facility has included a complex structure of steel beams, channels, gears, and cables, to help lift alewives over the dam, so they can get upriver to spawn.

It’s a symbol of the work being done in Maine to encourage a comeback by the remarkable little fish. Fisheries biologists call alewives a “keystone species,” meaning they support many other living creatures in nature’s food chain.

“You see it in the big things, the bald eagle population…everything from striped bass to warblers are all tied into this,” says Nate Gray, a biologist for the Maine Department of Marine Resources. He spends much of May monitoring fish passage at the Benton dam and sees the role the fish play in the food chain.

“Megafauna like whales and tuna fish, and cod and haddock will all feed on this species in abundance. Black ducks even,” Gray said.

The Benton dam is an amazing success story, considering that just over 20 years ago, alewives were almost non-existent here.

“When they built Edwards Dam 1837 everything stopped,” Gray said.

The Edwards Dam on the Kennebec River in Augusta eventually became a symbol for river restoration. When it was torn out, with great ceremony, in 1999, it literally opened the river to alewives and other species. The next year, fish made their way to the Fort Halifax dam in Winslow, where the DMR scooped them up and trucked them farther upstream. A few years later that dam was also removed.

The fish surged up the Sebasticook and the yearly runs grew.

The process itself is a big deal. Fish crowd upriver to the base of the dam, where most make their way into a giant bucket, which is then lifted up by cables to the top of the dam and dumped, about 3,500 fish at a time, into a big steel channel. They then swim through a series of tubes when fish are electronically counted before finally emerging into the river, above the dam.

Other alewives aren’t quite so lucky.

Those that miss the elevator to the top are scooped up into waiting for fishermen’s skiffs, then into crates and loaded on trucks to become lobster bait.

For humans, bait is the prime appearance of the alewife.

“For us and for the state they're very important,” Jim Wotton, a lobsterman from Friendship who also manages the alewife harvest at Benton each year, said.

“This fills a huge void, really important in the springtime for the lobster fishery of Maine.”

And, while he is focused on the value of the annual harvest, Wotton also says he and his crew admire the eagles and ospreys that swarm the river in the early mornings.

He said they all understand how remarkable and resilient the fish are and how they connect even inland communities to the life of the coast.

“This is an example of how the whole state and the coast, and fisheries on the coast, are intertwined and affect a lot more than people think it does.”

And, like the eagles, ospreys, otters, and minks that also crave the alewife, they have come to depend on the small miracle of the little fish, finding their way back home, each May, to help all of them move from spring into summer.