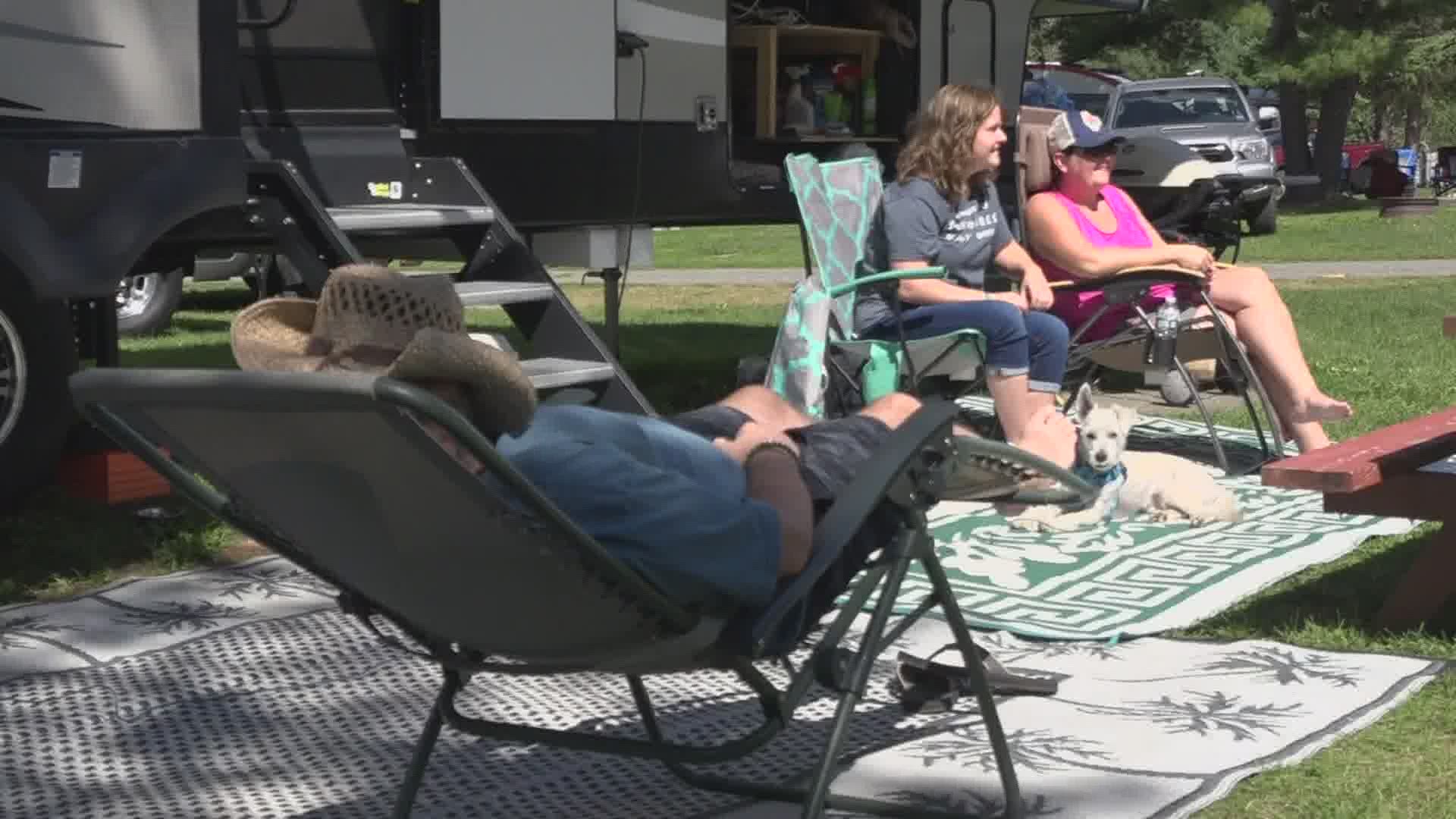 HERMON, Maine — At Pleasant Hill Campground in Hermon, families are enjoying a "stay-cation" for the Labor Day holiday weekend.

"We can't go on the other vacations that we had planned so we are trying to make the best of it as we can here," says Chavez, a resident from Presque-Isle that came with his family to Hermon to camp this weekend.

Chavez says he feels safe in this campground.

"hey stay within their groups, so it's very safe, things are clean here, it's a great place to come and get rid of the mass," says Chavez.

The owner of the campground, Andy Sacchetti says this year has been a challenge overall.

"Right from the very beggining April/May, we didn't even know if we were going to be allowed to open at all," says Sacchetti.

"We are definitely keeping less that usual here on purpose, it would be great economically if I was full all the time. I fill a little more comfortable by knocking that number down. A new change of what full is," says Sacchetti.

Luckily his campsite has been open but welcoming fewer campers than usual.

"For example we were at 90% this weekend, I was very comfortable with that I didn't want to overdue it just to prove a point, that I had spaces left, Iwant a little bit of a cushion," says Sacchetti.

A cushion to allow even more space between campers.
Carmel resident Lynn McFarland feels it was important for her family to get outside and make the most of this holiday weekend.

"You know as things get a little tough at home or whatever and it's always nice to have a change, and for the kids to come out and run around, get rid of some of that energy that they have built up," says McFarland.

"Two things really set apart the prevention steps that you and your family can take, wearing a face covering and staying physically distant at least 6 feet from everybody around you," says Dr. Shah.

Suggestions that we've all heard over and over again, but worth stressing this holiday weekend.

"As we have learned all too well in Maine over the past three weeks, COVID-19 can crash a party literally where we least expect it," says Dr. Shah.

Sacchetti says there are a lot more local people visiting local places, including his campground.

"We have done better than I thought we were going to do surprisingly," says Sacchetti.

Sacchetti says the campground has a lot of space for everybody to distance themselves.

"Different business plan though, a lot more long-term people, probably twice as much long- term than short term people that what we usually do," says Sacchetti.

The biggest change for Pleasant Hill Campground this year is that they don't have out of staters in the campground.

"Typically it would be 3/4 out of state people here for a week or a long weekend to go and visit other areas or use it as a hub for day trips," says Sacchetti.

But they are trying to remind campers to stay in their family groups at all times and keep a safe distance between each other.

The owner of the campground says he has turned people away, he doesn't want to reach capacity in his campground this year and prefers to leave some vacant spaces for extra distancing between campers.

"Get outside, have fun, just be as normal as you can, everybody is fine with being outside getting nature. That's what it's all about!" says Sacchetti.

Plesant Hill Campground in Hermon can be contacted here for any specific details on its rates and attractions.