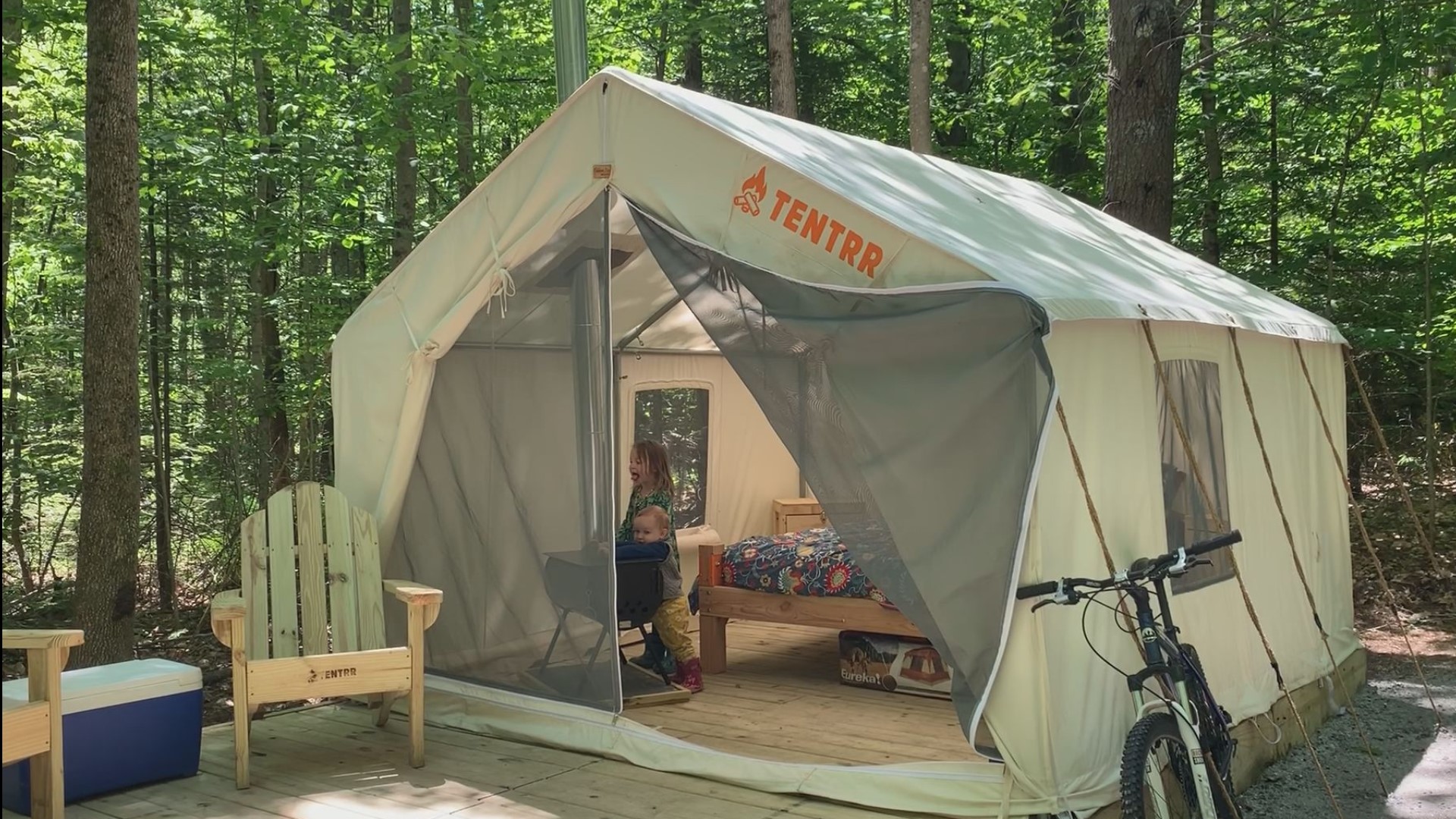 POWNAL, Maine — If you love the outdoors but the thought of camping sends you running to the nearest Holiday Inn, there is a new option in Maine. Ten new sites at seven Maine State Parks will soon cater to the incompetent camper.

Bradbury Mountain State Park in Pownal is the first State Park in Maine to unveil the new site. The Maine Dept. of Agriculture, Conservation and Forestry (DACF) partnered with a New York-based company called Tentrr that provides the gear.

The sites come with just about everything a camper could need. A large canvas tent with queen bunk beds and air mattresses sits atop a roomy platform. Adirondack chairs, a table and benches with a meal prep space and a fire pit are all included. A woodstove in the tent will keep campers warm all year round, and the site even comes with a solar shower -- which is not quite as exciting as it sounds. (It's just a black bag with a spigot -- you fill with water and hang from a tree for the sun to heat.)

The site also comes with a secondary six-man tent in case you want to kick the kids out of the platform tent, pumps for the air mattress, cooking utensils, a bottle opener, and some other small gadgets.

"This is really a plug and play camping scenario," says Jim Britt with DACF.

Britt says the ten sites are perfect for people like himself who like the idea of camping but don't have any of the gear and don't really want to "schlepp" it all from their car to a campsite.

Campers DO have to bring sleeping bags but other than that, food and flashlights, everything else is ready to go. Tentrr charged DACF no upfront cost, so now they will split the proceeds with the company.

Melissa Macaluso with DACF says all the proceeds from the sites will go right back into Maine State Parks.

Bradbury Park Manager Chris Silsbee hopes the Tentrr site will attract a new type of person to the state park. As of June, Bradbury's glamping site was the only one in operation, but the other nine are expected to be ready for July 4 weekend.

"This site provides opportunities for people that like that more of that fancy type camping," says Silsbee.

So if you don't have the gear or the patience to crawl in the attic and find it, the Tentrr sites might be perfect for you if not for your wallet.

"This is a great opportunity to just put a little bit of food, a little bit of water, some wine, come cook over the grill, sleep in a nice comfortable bed, be nice and warm and dry, pack up and go home and let someone else do the cleaning," says Britt.