Maine Coast Heritage Trust is working to buy and permanently protect the island, which it says is one of the largest uninhabited, undeveloped islands in Casco Bay. 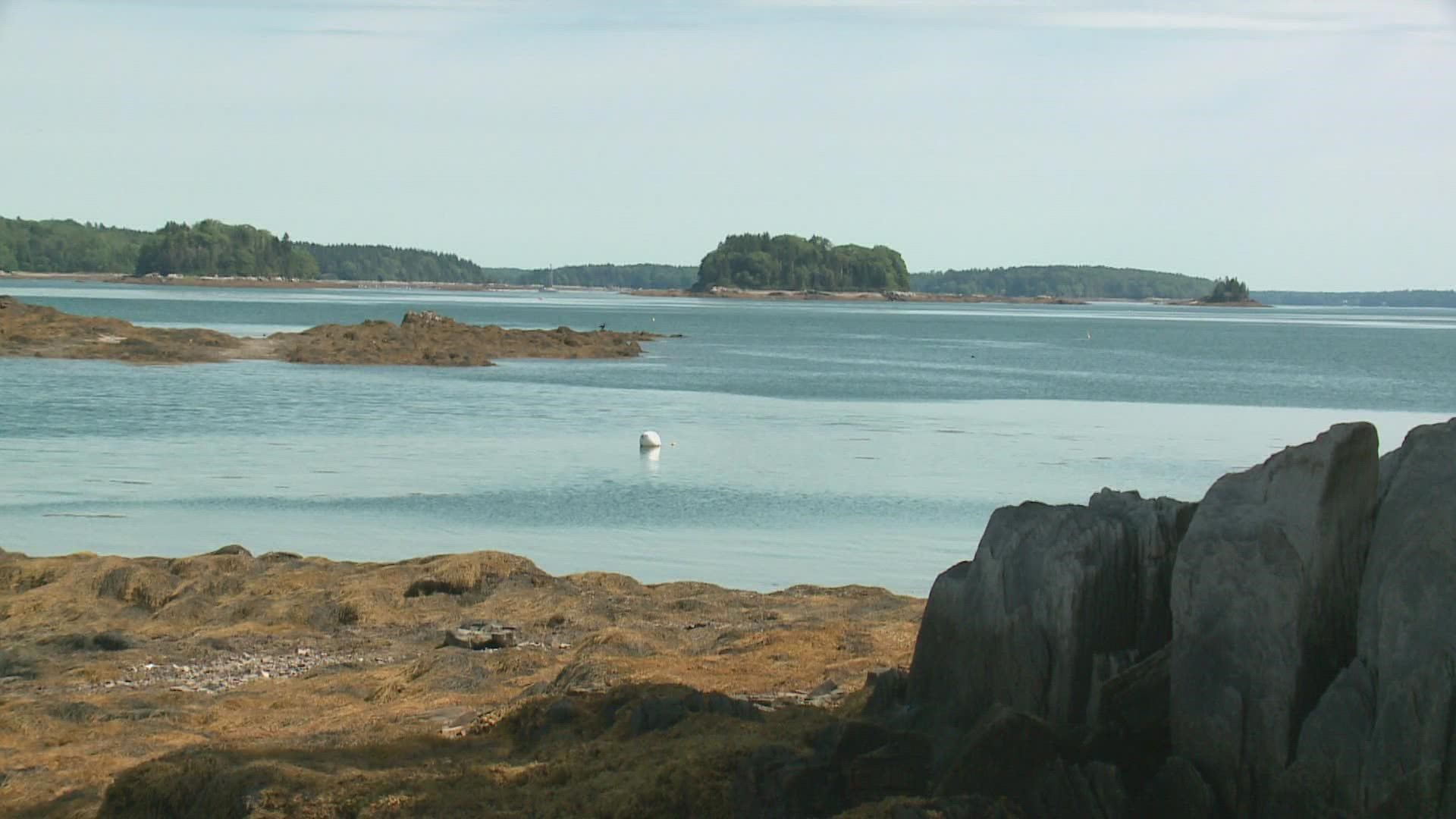 MAINE, USA — With a dog named River standing on the bow, the boat skimmed across Casco Bay. Then Ned Merrick cut the throttle to glide into a cove at Little Whaleboat Island.

Then it was wading through the shallows and seaweed to get to the rocky, low tide beach and onto the land.

Anne Marisic said she had been to Little Whaleboat before, paddling out by kayak from nearby Harpswell to visit the comparatively wild, 22-acre island.

“It's magical,” Marisic said of the island.

And that helps explain why her employer, Maine Beer Company, is now helping preserve it.

Maine Coast Heritage Trust is working to buy and permanently protect the island, which it says is one of the largest uninhabited, undeveloped islands in Casco Bay.

“It’s a gem,” is how MCHT land protection specialist Keith Fletcher described Little Whaleboat. Aside from a few footpaths and campsites, it also appears to have been unchanged for many years. The trees are tall, and no stumps are evident, suggesting that if the island woods were ever cut, it had to be a long time ago.

There is a beautiful, small beach area at low tide, but Fletcher said walking the shoreline around the island is very difficult at high water.

In short, he said it’s the kind of property MCHT seeks to preserve because there are so few like it on Maine’s coast. And they now have less than six months to raise the money to purchase the island from the family that has owned it and allowed the public to use it.

“They’ve been very generous for many years, but have decided to transition to a new owner and want it to go to conservation. So people can continue to come here and enjoy it,” Fletcher said.

They need to raise a final $400,000 by the end of this year to close the deal, and that's where Maine Beer Company comes in. The company is donating $50,000 as a matching grant, to encourage others to also donate. Anne Marisic, who is the marketing director, said it's part of Maine Beer’s ongoing commitment to donate 1% of its sales revenue to help protect the environment. In this case, the help is going to a project in the Freeport company’s backyard.

“To be able to protect this for others to come out and enjoy. When you get that opportunity why would you say no to it? We have the ability to help so we wanted to jump right on that,” she said.

MCHT hopes that donation and spreading the word about the island will generate more.

And while Little Whaleboat is a popular spot for boaters and kayakers to stop, as are nearby Whaleboat Island and The Goslings, which MCHT also own and manage, relatively few Mainers will ever get to those spots.

Fletcher said preservation is about an idea, as well as a visit.

“I think it’s a birthright for every Mainer to be able to go out to a wild island and visit. And whether they actually do that or not, they should be able to do it,” he said.

The nearly calm waters of Casco Bay lapped on the island’s beach and shifted the seaweed as he spoke about the need for Maine people to have wild places.

“They should know it's there, for themselves and their kids.”