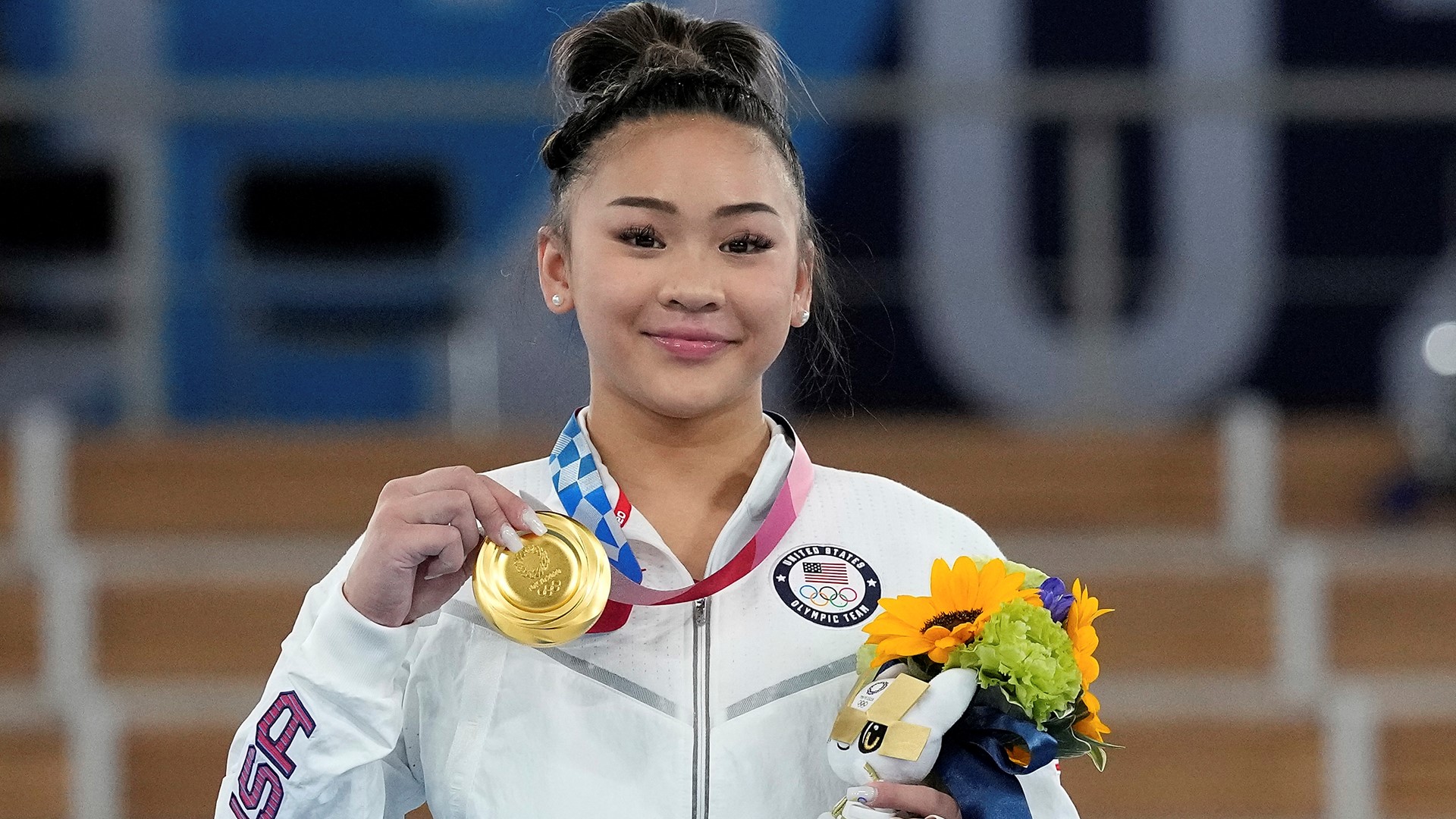 Suni Lee is an Olympic champion.

The 18-year-old gymnast from Minnesota edged Rebeca Andrade of Brazil for gold in the women's Olympic all-around final, giving the U.S. its fifth-consecutive gold medal in that event.

Lee's total of 57.433 points was just enough to slip by Andrade.

The Brazilian became the first gymnast from Latin America to win a medal in the all-around. Russian gymnast Angelina Melnikova took bronze.

Defending Olympic champion Simone Biles watched from the stands after opting out of the competition to focus on her mental health.

She won the women’s 200-meter breaststroke with a time of 2 minutes, 18.95 seconds, breaking the mark of 2:19.11 set by Denmark’s Rikke Moller Pedersen at the 2013 world championships in Barcelona.

The United States claimed the other two medals. Lilly King set a blistering pace early in the race and held on for a silver in 2:19.92. Annie Lazor grabbed bronze in 2:20.84.

Russia’s Evgeny Rylov has completed a backstroke sweep. Rylov added the 200-meter backstroke title to his victory in the 100 back, winning with an Olympic-record time of 1 minute, 53.29 seconds.

Caeleb Dressel set another Olympic record in the semifinals of the 100-meter butterfly. Minutes after Hungary’s Kristof Milak took down the mark in the first semifinal heat, Dressel went even faster with a time of 49.71 seconds in the second heat. It was the third-fastest time in history and left Milak as the second-fastest qualifier at 50.31.

Credit: AP
Caeleb Dressel of the United States swims in a heat of the men's 100-meter butterfly at the 2020 Summer Olympics, Thursday, July 29, 2021, in Tokyo, Japan. (AP Photo/Matthias Schrader)

Americans April Ross and Alix Klineman have moved on to the Olympic beach volleyball knockout round after having just a little bit of trouble against the Netherlands.

Starting in a drizzle and finishing in a downpour, the No. 2 seeded Americans lost the opening set of the match 22-20. It was the first set they have lost in the Tokyo Games. They trailed 12-9 in the second before scoring four straight points and seven of the next eight to take it 21-17.

In the tiebreaking set, they pulled away to beat the winless Dutch pair of Sanne Keizer and Madelein Meppelink 15-5.

The victory gave the four U.S. beach volleyball teams — two men’s and two women’s — a 9-1 record in these Olympics. Jake Gibb and Tri Bourne (2-0) play their final match of the round robin on Friday night. Sarah Sponcil and Kelly Claes (2-0) finish up against Brazil on Saturday morning. Phil Dalhausser and Nick Lucena are good for at least one more match after finishing the preliminary round 2-1.

Reigning BMX racing gold medalist Connor Fields of the United States was carried off on a stretcher after crashing in the third semifinal heat at the Tokyo Olympics.

Fields was fourth after his opening two heats and landed hard off a jump heading into the first turn in the third run. The 28-year-old from Las Vegas slammed into the turn and lay on the track as medical personnel rushed out to help him.

Fields was attended to for several minutes before being carried away. He qualified for the finals, but was be able to race.

In other action, the U.S. women's rugby sevens team finished preliminary play 3-0 and will head into the quarterfinals Friday.