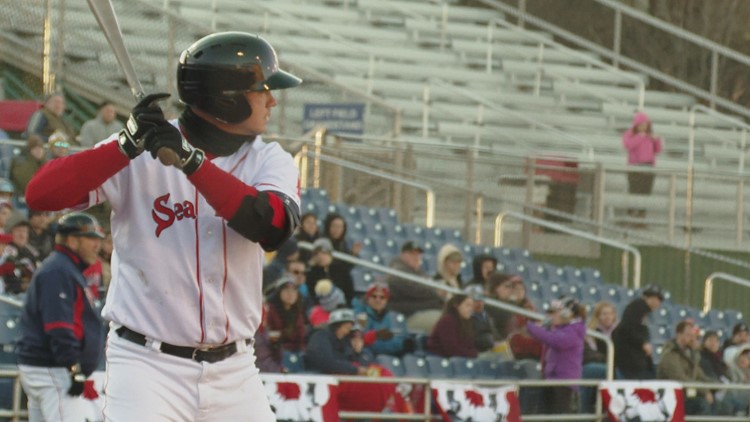 Photo by: NEWS CENTER Maine
The chilly Maine nights in early spring are an adjustment for prospects like Bobby Dalbec who wore layers at a game with the Portland Sea Dogs in April 2019.

TOKYO, Japan — Tampa Bay prospect Jake Cronenworth put the U.S. ahead to stay in the first inning, Angels draft pick Jo Adell homered and the Americans beat Japan 4-3 Tuesday night at the Tokyo Dome for their first win in the super round of an Olympic baseball qualifying tournament.

Clayton Richard, released by Toronto in September, got the win despite allowing two runs in 2 2/3 innings. Brandon Dickson, a former St. Louis pitcher who has spent seven seasons with Orix in Japan's Pacific League, struck out two in a perfect ninth for the save. Seattle's Penn Murfee started with three hitless innings.

Managed by Scott Brosius, the U.S. plays Australia on Wednesday and Taiwan on Friday. The first- and second-place teams advance to the Premier12's gold-medal game and the third- and fourth-place teams play for the bronze. The top finisher from the Americas, the U.S. or Mexico, qualifies for the Tokyo Olympics next year. The second-place finisher from the Americas goes to a final qualifying tournament in March or April.

Japan and Israel already are assured berths in the six-nation Olympic field.

Bobby Dalbec is happy to show the Red Sox what he can do as a prospect with the Portland Sea Dog in April 2019.
NEWS CENTER Maine

Hideto Asamura drove in all three runs for Japan with RBI singles in the fourth, sixth and eighth innings, the first two off Richard and the last against Tampa Bay's Spencer Jones.

Cronenworth had an RBI grounder in the first that scored Philadelphia's Alec Bohm, who had doubled leading off against Rei Takahashi. Boston's Bobby Dalbec added a run-scoring double in the third.

Oakland's Mark Payton doubled leading off the fifth and scored on Bohm's single. Adell, selected by the Los Angeles Angels with the 10th overall pick in the 2017 amateur draft, homered off Yudai Ono in the seventh.