Emilie Grand'Pierre is the only female swimmer representing Haiti in the 2020 Olympics. She spoke with NEWS CENTER Maine the day before her 100m Breaststroke race. 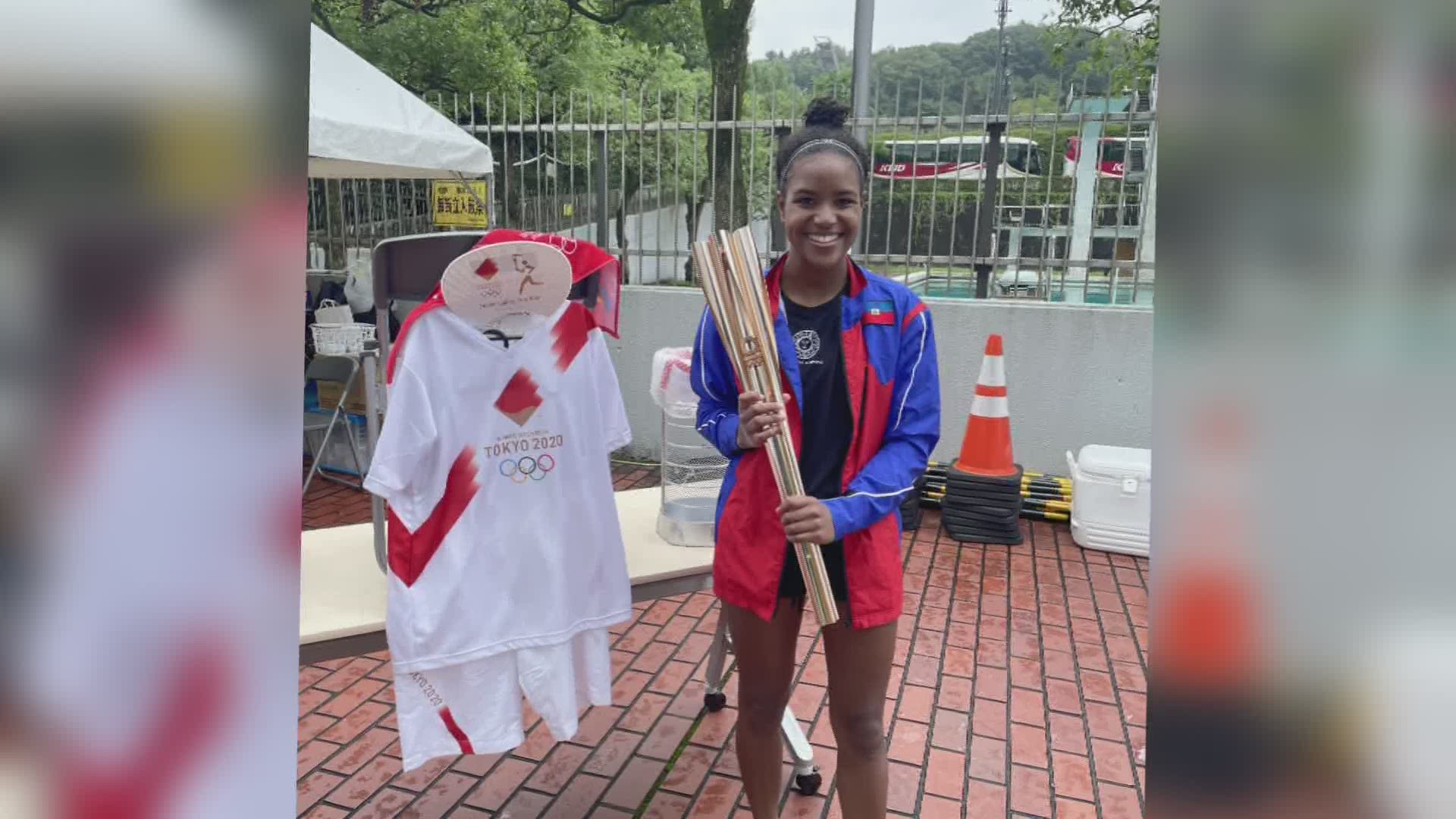 TOKYO, Japan — Just before 10 p.m. local time in Tokyo, Olympic athletes returned to the Olympic Village after the first day of competition. When Emilie Grand'Pierre got back to her room, she began to realize what is waiting for her when she wakes up.

“I think it’s starting to hit me," Grand'Pierre told NEWS CENTER Maine Saturday. “I don’t think it will all come crashing down until I’m behind the blocks ready to race, so I’m excited for that moment.”

The Bowdoin College swimmer is the only female swimmer representing Haiti in this year's Olympic games. Grand'Pierre is slated to race in Sunday's 100m Breaststroke race, which will mark the young swimmer's Olympic debut.

While some athletes need to qualify at team trials, Haitian qualifying is different, Grand'Pierre said. Because swimming is still a new sport in the country, only two athletes were slated to represent Haiti in the pool in Tokyo.

The Atlanta, Georgia native found out that she would likely take one of those spots when her mom called her as she walked back to her dorm room at Bowdoin in March.

“That was a lot to drop on me in the span of 30 seconds," Grand'Pierre said.

Despite the good news, the trip to the Olympics wasn't official just yet. Grand'Pierre needed to post qualifying times at two international events.

Normally, flying out of the country to get in a pool overseas would be no problem.

Grand'Pierre's mom called her in the middle of the COVID-19 pandemic. Combine that with Bowdoin's strict policy regarding where its students could go if they leave campus; challenges to overcome.

Luckily for Grand'Pierre, she was able to leave campus and make those qualifying times.

“It wasn’t until four weeks ago until I got my official invitation," she added.“I’m still in shock from those 30 seconds of my mom [telling me I was going to the Olympics.]."

As millions of people from around the globe tuned in to the opening ceremonies Friday night, Grand'Pierre had the best view in the house.

“To hear them say Haiti on the big speaker and to walk out and see the bright lights, kind of get blinded for a second, it was all so crazy it blew my expectations out of the water," she said. “All the athletes just cheering you on, it was such an exciting moment, I had tears in my eyes it was so crazy.”

After the opening ceremonies, Grand'Pierre was able to catch some swimming action before her race Sunday.

“One of the perks of having no spectators is that the athletes get a little bit closer to the swimming pool, so we have really good seats this year," she said.

Grand'Pierre added the athletes are doubling as both competitors and fans during the games. While we won't see packed stadiums during the Olympics, she added there was still plenty of noise coming from the few hundred folks inside the pool.

“There was a lot of cheering going on, a lot of fast swimming still going on without spectators," she added.

While family and friends won't be able to watch her compete in person, Grand'Pierre knows they'll all be watching her and going crazy when she gets on the starting block Sunday.

In her household, swimming is the family sport. Grand'Pierre said the 2016 games were the first time since 1996 that Haiti sent swimming athletes to the Olympics. One of the swimmers was her older sister Naomi.

“She paved the way for me and having her as a role model, an ally through this has been amazing," she added. “To have someone who understands is another big blessing that I couldn’t have asked for, this is the perfect Olympics for me.”

The Grand'Pierre family isn't short on future Olympians either. Alexander, Emilie's brother, is joining her on the Bowdoin swim team in the fall.

“Come on dude you can do it, Paris 2024," Emilie said about motivating her brother next year.

Before she went to bed before the biggest race of her life, thus far, Grand'Pierre reflected on what it means to represent Haiti, her parent's home country.

Grand'Pierre and Davidson Vincent are the two Haitians representing their country in the pool in Tokyo. Grand'Pierre said she hopes the two can be role models for future generations of swimmers in Haiti.

Their success can also kickstart the swim program that Grand'Pierre said has a lot of young talent.

“Haiti doesn’t have a 50 [meter] pool that’s full. We have a pool built but it’s empty because running a pool just costs so much and not enough people swim to have that operating," she added.

Before closing her laptop and getting to bed, Grand'Pierre added she established a great routine since being in Japan and won't do anything different when she gets up for her race Sunday.

“All that’s left is to race and I’m really excited to do so.”