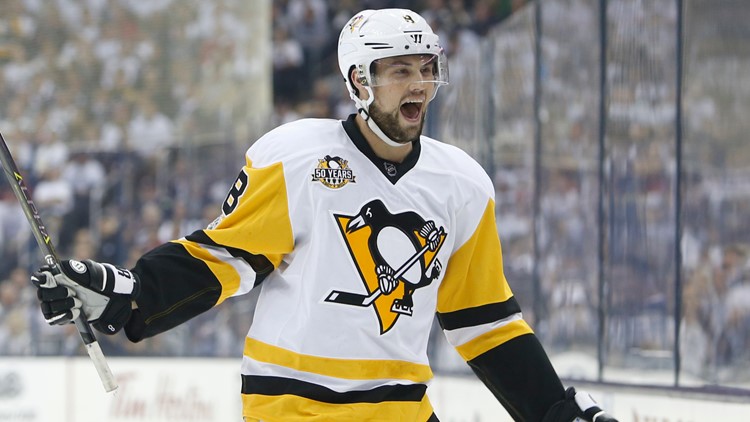 Photo by: AP Photo/Jay LaPrete
Pittsburgh Penguins' Brian Dumoulin celebrates their goal against the Columbus Blue Jackets during the first period in Game 3 of a first-round NHL playoff series, in Columbus, Ohio on April 16, 2017.

Growing Dumoulin family is a hockey dynasty in the making

BIDDEFORD, Maine — As someone who's used to being surrounded by the Stanley Cup and championship rings, Brian Dumoulin is facing quite an adjustment to a new life of sippy cups and teething rings.

The Pittsburgh Penguins defenseman became a father for the first time on Sunday, Nov. 3.

In a message on Instagram, Dumoulin wrote, "I’m so thankful for my wife Kayla for bringing Brayden Joseph into this world. I’m very happy they are both healthy and okay. Thank you to all the Nurses and Doctors at UPMC McGee Women’s who helped and guided us through this amazing time in our lives."

Dumoulin was by his wife's side for the birth of his son at UPMC Magee-Women's Hospital in Pittsburgh. But the Penguins were on the road the next night in Boston, so Dumoulin hopped a flight to join his teammates in time for the game.

When Dumoulin arrived at TD Garden, he had no problem finding his locker thanks to the balloons that his teammates had strung to his skates.

Fatherhood didn't soften Dumoulin's competitive edge. He got credit for an assist on a goal by Nick Bjugstad. But it wasn't enough to prevent the Penguins from losing to the Bruins, 6-4.

As hard as it must have been to leave his son, at least the game brought Dumoulin closer to his family in New England. Dumoulin grew up in Biddeford and played hockey in the local school system. He is the only Maine-born hockey player ever to win the Stanley Cup.

RELATED: Skate with Dumoulin and save a skating rink

Dumoulin brought the Cup to Biddeford after championship seasons in both 2016 and 2017. Whenever he is eventually able to make the trip home with Brayden -- between the diaper bag, the car seat, the toys, etc. -- those old days of lugging around a giant, silver trophy will seem like a cakewalk.