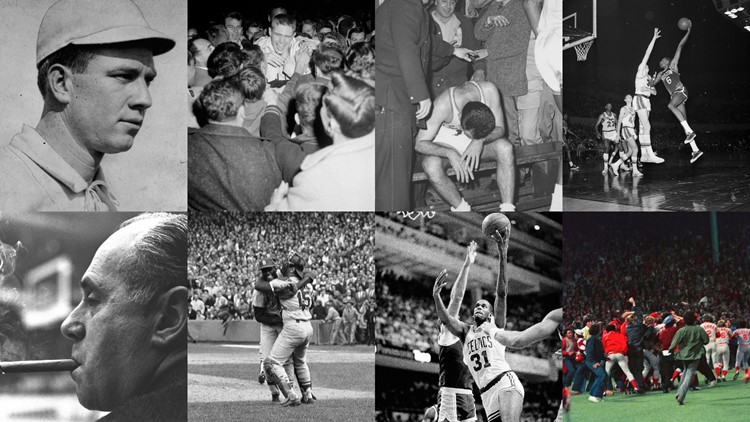 BOSTON — Wednesday marks the first Stanley Cup Final Game 7 played by the Bruins in Boston. Among all the city's three major professional sports teams whose season finales end in a championship series – Patriots don't count with a one-game Super Bowl – it's only the ninth time this has ever happened.

Prior to 2019, they had occurred in only 16 of the 89 post-1938 Stanley Cup Final series to feature best-of-seven series. The Bruins' three appearances before 1939 did not reach all-stakes decisive finales.

The MLB for some time had a best-of-nine series — all four went to Game 7, and just one ended short there — but despite that, only 39 times has the World Series been brought to a series-deciding Game 7 over the league's 114 seasons ending in a championship being won.

Here's how each of the three Boston teams have done in the eight championship-decisive Game 7s played at home, prior to the result of the Bruins' 2019 Game 7 Stanley Cup Final at TD Garden:

As previously mentioned, 2019 is the first Stanley Cup Final in which the Bruins have hosted a Game 7 in Boston.

Seven games were played in the 2011 Stanley Cup Final, but Boston won the finale away as it was played in Vancouver, Canada.

Celtics defeat St. Louis Hawks 125-123 in double overtime to capture their first NBA championship. Rookie Bill Russell scores 19 and has a massive rebound total of 32. Boston reportedly celebrates by "shaving Russell's beard in the locker room, downing a few cold ones and going out to dinner."

Bob Cousy of the Boston Celtics weeps with joy on the bench after playing 47 out of 48 minutes of game against the St. Louis Hawks at Boston Garden, Boston, Ma., April 9, 1960. The Celtics defeated the Hawks, 122-103, to win their third National Basketball Association Championship in four years.
AP Photo

Celtics defeat Los Angeles Lakers by two points, 95-93, after previously rallying from a three-games-to-one deficit to force the decisive finale. Russell, who had 32 rebounds, is knocked down by fans who rush the court prematurely with four seconds left. John Havlicek somehow dribbles out the clock. C's' Red Auerbach ends his coaching career, hiring Russell to replace.

Cedric Maxwell of the Boston Celtics goes up for a basket at right as he goes under Kurt Rambis of the Los Angeles Lakers in championship action Tuesday night, June 12, 1984 in Boston in the first quarter.
AP Photo

Celtics defeat Los Angeles Lakers by nine points, 111-102, in what's referred to as "Showdown '84." Celtics forward Cedric Maxwell reportedly tells his teammates "to put the load on his back because he was ready to carry them," finishing with 24 points, eight assists and eight rebounds. Their 15th title.

Red Sox lose to New York Giants, 11-4, in Game 7 of a best-of-nine series that featured a tie in Game 2. Smoky Joe Wood, who had pitched and won Game 1 and 4, gives up six runs in the first inning. Boston would host and win the next game to capture their second title and first in nearly a decade.

St. Louis Cardinals pitcher Bob Gibson receives a congratulatory hug from catcher Tim McCarver after he pitched a three-hit, 7-2 victory in Game 7 over the Boston Red Sox to win the 1967 World Series at Fenway Park, Oct. 12, 1967 in Boston, Mass. Gibson became the seventh man to have compiled a 3-0 series record.
AP Photo

Enthusiastic fans run onto Boston Fenway Park’s grass on Oct. 22, 1975 to celebrate the Cincinnati Reds' victory over the Redsox in the 1975 World Series.
AP Photo

Red Sox lose to Cincinnati Reds, 4-3, in what's considered to be one of the best World Series that's ever taken place. The Sox take an early 3-0 lead on an RBI single from Carl Yastrzemski and two bases-loaded walks, but the Reds add two in the sixth, tie in the seventh and with two outs in the ninth score on an RBI single from second-baseman Joe Morgan.