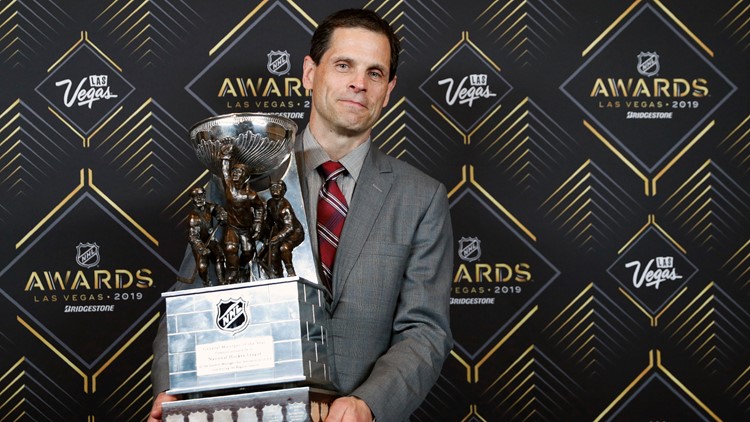 Photo by: AP Photo/John Locher
Don Sweeney of the Boston Bruins poses with the General Manager of the Year Award after winning the honor at the NHL Awards on Wednesday, June 19, 2019, in Las Vegas.

LAS VEGAS — The NHL has handed out its annual awards in Las Vegas.

Calgary's Mark Giordano has become a first-time winner of the Norris Trophy as the NHL's top defenseman.

The Calder Trophy winner as Rookie of the year is Vancouver forward Elias Pettersson.

Islanders bench boss Barry Trotz is taking home the Jack Adams Award as coach of the year, and Boston’s Don Sweeney is the GM of the year.

RELATED: A trip across the border to Bruins' Don Sweeney's hometown

The Vezina Trophy has gone to Tampa Bay’s Andrei Vasilevskiy as the No. 1 goaltender.

Ryan O’Reilly has come away with the Selke Trophy as the best defensive forward, one week after he captured the Conn Smythe Trophy as playoff MVP after helping the Blues win the Stanley Cup.

Florida’s Aleksander Barkov was given the Lady Byng Trophy, which goes to the player exhibiting sportsmanship and gentlemanly play combined with playing ability.

Islanders netminder Robin Lehner received the Masterton Trophy to the player who best exemplifies the qualities of perseverance, sportsmanship and dedication to hockey.

Nashville forward Wayne Simmonds was the winner of the Mark Messier Trophy, awarded annually to the player that exemplifies great leadership qualities both on and off the ice.