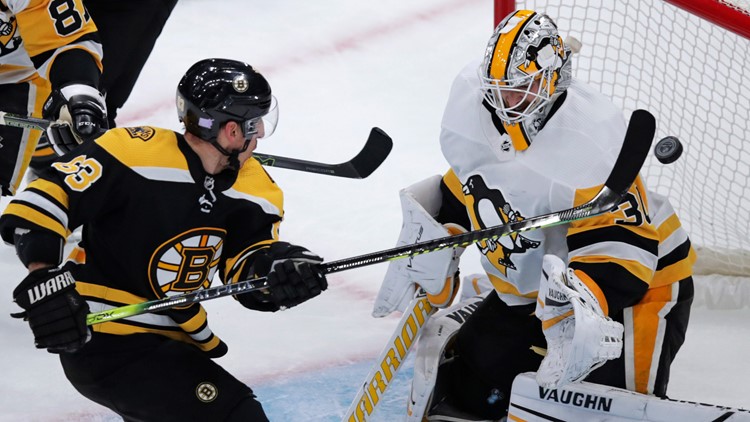 Photo by: AP Photo/Charles Krupa
Boston Bruins center Brad Marchand tips the puck past Pittsburgh Penguins goaltender Matt Murray for a goal during the first period of a game in Boston on Monday, Nov. 4, 2019.

Marchand makes like Mookie and scores with a home run swing

BOSTON — Brad Marchand batted one out of the air and into the net, and his game-winner deflected off the goaltender's back.

Certainly not your average two goals, but things are far from normal about the Boston Bruins' start this season.

Marchand scored his second of the game with 1:57 left in the third period, and the Bruins beat the Pittsburgh Penguins 6-4 on Monday night after blowing a 3-0 lead.

"They're fun to be part of. You don't expect them to come often, but they're nice when they happen," Marchand said of his big night, which included three assists and extended his point streak to 13 games.

David Pastrnak, Jake DeBrusk and Torey Krug also scored for Boston (11-1-2), which has won six straight. The Bruins are 7-0-1 at home this season.

Marchand skated in on the left wing and fired a wrister that hit the far post and went into the net off Tristan Jarry's back. Krug's one-timer from the right circle had tied it 4-4 midway into the third.

In the first, Marchand used a baseball-style swing to bat a loose puck out of the air and into the net, making it 2-0.

"We won the game because of Jaroslav," DeBrusk said. "We didn't like the way we came off the ice in the second period."

The Bruins had opened a 3-0 lead on Pastrnak's team-leading 14th goal 4:22 into the second when Pittsburgh coach Mike Sullivan decided to pull starting goalie Matt Murray.

"I think we got a little comfortable when we got up 3-nothing and their goalie got pulled," Marchand said. "We got it done. At the end of the day, it's the regular season. It doesn't matter how you win, and we got the win."

The Penguins then outshot Boston 15-4 over the remainder of the period, scoring four times to take the lead.

"This is one of the best games we've played all year," Sullivan said. "We're playing one of the top teams in the league. ... I thought it was a really good game by our team. We just didn't win."

Kahun started the comeback when he fired a tough-angle shot into the net from near the bottom of the right circle at 5:35. Bjugstad then sliced the deficit to one 4:21 later when he broke in alone off a pass from Kris Letang and fired a wrister that caromed into the net off the right post.

Evgeni Malkin backhanded a pass from along the boards, finding Rust alone in the slot. He beat Halak with a wrister to the glove side, tying it at 15:59.

Marino, who was off for tripping, stepped onto the ice as his penalty expired, collected a loose puck near center ice, skated in on a clean breakaway and shifted to the backhand before tucking it behind Halak and pushing the Penguins in front with 2.4 seconds left in the period.

Players on Pittsburgh's bench were jumping up and down when Marino scored to cap the huge comeback, and a frustrated Halak smashed his stick off the crossbar into a couple of pieces, tossing the handle off the backboards when he was done.

Marino grew up about 45 minutes away in Easton, Massachusetts, and attended Harvard.

"You just get the first shift under your belt and after that you're just playing hockey after the first couple shifts," he said. "You settle down and start to settle in."

NOTES: Penguins D Brian Dumoulin flew in separately from the team and played after his wife, Kayla, gave birth Sunday to a boy the couple named Brayden. He got an assist on Bjugstad's score.

Boston recalled F Cameron Hughes from its AHL affiliate in Providence, Rhode Island, before the game and sent F Peter Cehlarik down there. The 23-year-old Hughes made his NHL debut. He said during the morning skate that his parents were flying cross-country during the day from Portland, Oregon, after watching one of his brothers play Sunday. ... Boston coach Bruce Cassidy said F David Backes was at the practice facility Monday morning and was "feeling better." Backes didn't play and the coach said he wouldn't Tuesday, either. Backes collided with Ottawa F Scott Sabourin Saturday, with the players' helmets hitting at nearly full speed. Sabourin was taken to a hospital after being taken off the ice on a stretcher. He suffered a broken nose after appearing to be knocked unconscious and falling face-first to the ice. ... Boston D Charlie McAvoy left the ice bleeding from the head late in the game and Krug left with a towel to his face, needing stitches near his jaw.

RELATED: Maine kids bring out the softie in Bruins' brawler

Penguins: At the New York Islanders on Thursday.

Bruins: At the Montreal Canadiens on Tuesday for the first meeting this season of the longtime rivals.