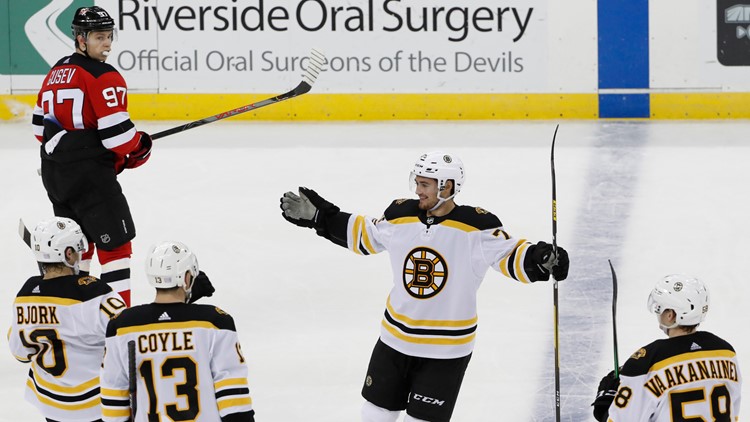 Dependably beatable Devils are a tonic for Bruins' malaise

Tuukka Rask made 25 saves and New Jersey native Connor Clifton added a goal as the Bruins beat the Devils for the eighth time in nine meetings.

Blake Coleman scored for New Jersey, which was looking for its first three-game winning streak since December 2018. Mackenzie Blackwood made 23 saves in starting for the 12th time in 14 games.

The win was only Boston’s second in the last seven games (2-2-3), and the Bruins got goals from the expected and unexpected.

Pastrnak has an NHL-high 19 goals in 21 games, including 17 in his last 16 contests. Grzelcyk had six career goals in his first 149 games in the NHL. The defenseman had his first two-goal game in No. 150.

Marchand set up the unlikely duo for goals 14 seconds apart in the first period for a 2-0 lead.

Coleman cut the margin in half late in the second, but the Bruins broke the game open in the third with three goals.

Pastrnak drew a penalty from P.K. Subban at 3:11 of the third period and scored eight seconds later with a rising shot from inside the blue line that whizzed past Blackwood.

Grzelcyk stripped the puck from Subban at the Devils line and skated in to beat Blackwood in close.

Clifton got his second of the season on a point shot.

NOTES: Devils G Cory Schneider cleared waivers and was assigned to Binghamton (AHL). ... Bruins forwards Brett Ritchie and Jake DeBrusk returned to the lineup after they each missed five games with injuries. ... Coleman played in his 200th game and extended his point streak to four games.

Bruins: Return home to face the Buffalo Sabres on Thursday.

Devils: At the Pittsburgh Penguins on Friday.