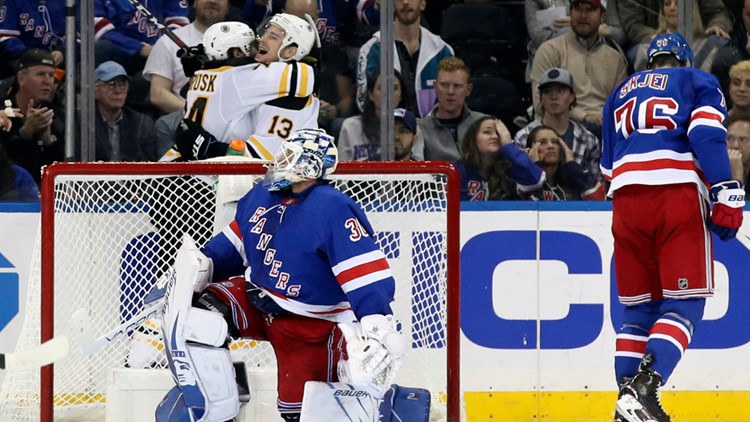 NEW YORK — Brad Marchand had two goals and three assists, and the Boston Bruins scored four times in the second period and beat the New York Rangers 7-4 on Sunday night.

Patrice Bergeron scored three goals for his fifth regular-season hat trick, Charlie Coyle and Zdeno Chara each had a goal and an assist, and David Pastrnak added five assists to help the Bruins win for the eighth time in 11 games (8-1-2) this season. Jaroslav Halak stopped 25 shots as Boston earned a point for the seventh straight game (5-0-2).

Michael Haley, Pavel Buchnevich, Chris Kreider and Brady Skjei scored for the Rangers, who lost for the sixth time in seven games (1-5-1). Henrik Lundqvist had 27 saves before being pulled after two periods. Alexandar Georgiev finished with nine saves in the third.

Trailing 1-0 after 20 minutes, the Bruins took control of the game in the second period. Pastrnak charged the net with the puck from the left side, and made contact with Lundqvist. Bergeron followed and put the puck in for his third of the season 11 seconds into the period. The goal was confirmed after a video review.

Marchand put Boston ahead 57 seconds later. He got the puck in front of the net, made a backhand-forehand move before putting a backhander past Lundqvist.

Coyle made it 3-1 as he got a pass across the front of the net from Charlie McAvoy, settled the puck and put it top shelf for his first at 9:27.

Marchand got his second of the night with 7:51 left in the middle period, taking a pass from Coyle and whipping it past Lundqvist from the right side for his seventh. The Bruins were outshooting the Rangers 28-9 at that point.

Chara made it 5-1 as he beat Georgiev with a slap shot from the blue line just 43 seconds into the third on the first shot the Rangers' backup goalie faced.

Kreider scored on a rebound with 1:59 left, and Skjei pulled the Rangers within two just 21 seconds later, but Bergeron's empty-netter with 45 second left capped the scoring.

The Bruins controlled play for the opening half of the first period, outshooting the Rangers 6-0. Each team had a power play during that stretch. Lundqvist made several nice stops, including a shot by Marchand that hit the goalie gloved after it hit off his chest, and an attempt by Brett Ritchie in front in the first two minutes.

However, the Rangers got on the board on their first scoring chance. Halak stopped Brendan Smith's shot from the left side - New York's first shot on goal - but Haley charged in and knocked in the rebound with 9:41 left in the first. It was Haley's first goal since signing with the Rangers on Oct. 1. 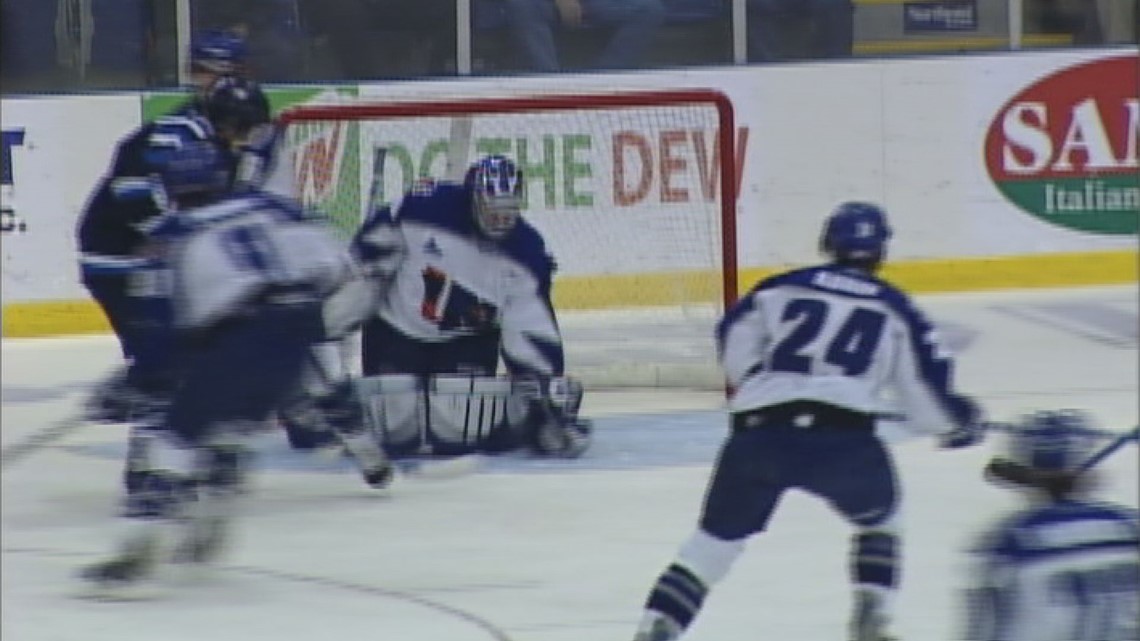 Halak had some big saves to keep it a one-goal game, stopping a tip-try by Brendan Lemieux and a follow with 7:12 left, a shot by Artemi Panarin a minute later and a backhand by Mika Zibanejad with 5:52 to go.

NOTES: Marchand extended his point streak to 10 games, with seven goals and 12 assists in the stretch. He also has an assist in nine straight games.

Pastrnak, who leads the Bruins with 11 goals, extended his point streak to nine games with 12 assists and 23 points in that stretch. ... The Bruins improved to 3-1-1 in last five matchups with the Rangers after an 0-6-1 stretch. ... The teams face each other 2 more times:  Nov. 29 at Boston, and Feb. 16 back in New York. ... This was the Rangers' 2,000th home game at current Madison Square Garden, which opened on Feb. 11, 1968. ... Zibanejad skated in his 500th career game. He played 6:31 in the first period before leaving after taking a hit from Bergeron in the corner. He did not return. ... Buchnevich has four goals and eight points in eight career games against the Bruins.