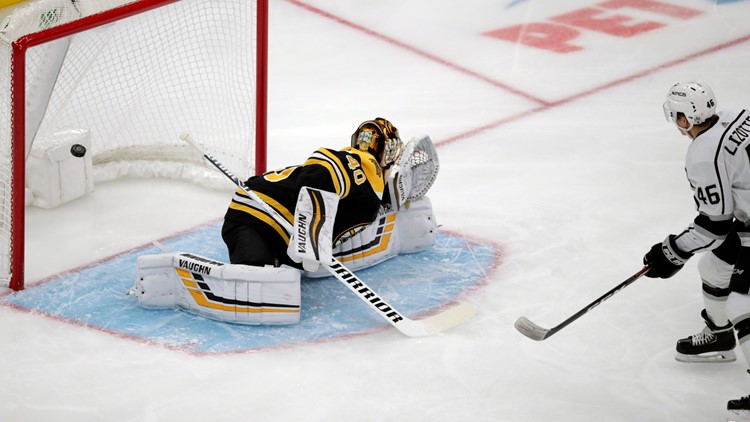 Photo by: AP Photo/Charles Krupa
Boston Bruins goaltender Tuukka Rask looks back as the puck passes on a goal by Los Angeles Kings center Blake Lizotte during the first period of a game in Boston on Tuesday, Dec. 17, 2019.

BOSTON — The Boston Bruins were able to close the gap on Washington atop the NHL’s Eastern Conference race despite losing for the sixth time in seven games.

The Bruins blew a late 3-2 lead and absorbed a 4-3 setback to the Kings on Anze Kopitar’s goal 3:23 into overtime. Los Angeles pulled goaltender Jonathan Quick for a sixth attacker before Matt Roy tallied with 2:01 remaining in regulation.

Blake Lizotte had a goal and an assist for the Kings, and Quick finished with 37 saves.

Danton Heinen had a goal and assist for Boston, which fell to 1-5-1 in its last six and has lost two straight at home.

The Bruins are within four points of the East-leading Capitals and lead the Atlantic Division by 10 points over Buffalo.