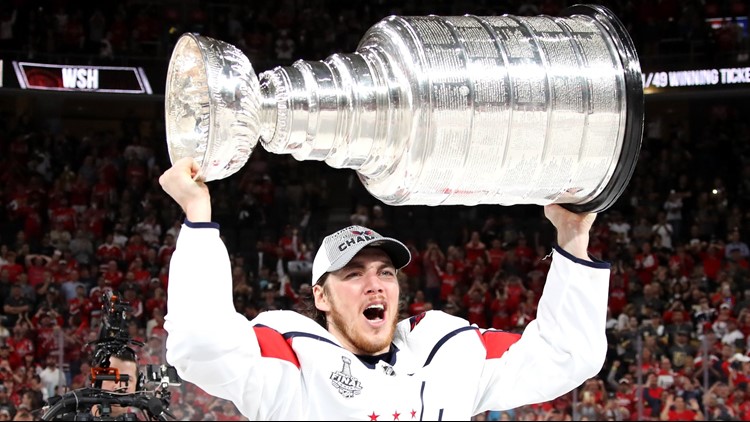 BOSTON (AP) — T.J. Oshie went through five early playoff exits with the St. Louis Blues who could never seem to break through.

Four years after being traded, the Capitals winger hopes the Blues winning the Stanley Cup will ease their pain.

"They put in a lot of hard work," said Oshie, who won the Cup with Washington last year. "They've had a lot of heartbreak. ... For that fan base and a lot of the staff that took care of me for seven years and some players that are still there that I've had and have a close bond with, I'd love to see them win."

RELATED: You'll love to hate these Bruins in the Stanley Cup Final

RELATED: Here are your projected lineups for Game 1

Oshie and plenty of other former members of the Blues organization are rooting for their old team to win the Cup for the first time in franchise history. That includes a couple of executives who helped build the team and are beaming with pride at St. Louis living up to the potential that it appeared to have over this run of eight playoff appearances in 11 seasons.

"It's just a good thing," former Blues president of hockey operations John Davidson said. "That city deserves this. It's a great sports city. There's a lot of tradition behind their hockey club. ... I'm happy for them."

St. Louis is the NHL's oldest franchise that hasn't won the Cup, and only the Toronto Maple Leafs' drought since 1967 (months before the Blues' inaugural season) is longer. Scotty Bowman, the Blues' coach for consecutive trips to the final in 1968, 1969 and 1970, still feels a connection because his wife is from nearby Southern Illinois, he met her in St. Louis and has a history with assistant Larry Robinson and others in the organization.

Bowman is decades removed from his time with the Blues. Martin Brodeur was the assistant general manager the past three seasons and before that was a special assistant to GM Doug Armstrong and finished his career in St. Louis.

Brodeur still lives in St. Louis while working for the New Jersey Devils because his 9-year-old son is in school and youth hockey there. He won't go so far as to attend the games, but is looking forward to the city getting swept up in Stanley Cup frenzy.

"This city, it's been crazy for this for a long time — obviously for 49 years, I guess," Brodeur said. "Regardless of the people I worked with that they were tremendous to me and it was a big learning curve and everybody really helped me out in that department, but for the people that live in St. Louis and it's a great sports town and they care about their Blues — it's been a great run for them. I'm really happy for them."

Davidson, who was with St. Louis from 2006-2012 and is now president of the New York Rangers, is happy for longtime Blues GM Larry Pleau, who has been with the club since 1997 and is now a senior adviser. Davidson also hired Armstrong to succeed Pleau and had a major hand in piecing together this core.

This was the success Davidson envisioned when the Blues drafted Alex Pietrangelo fourth overall in 2008.

"We actually sent him back to junior twice," Davidson said. "It was a hard thing to do, but it was the best for him. To see him become captain and see the way he plays, that's pretty darn special."

Davidson never imagined it would happen with Jordan Binnington in goal, going so far as to say, "I don't think the Blues knew he was going to be this good, but God bless him, he's good,."

Capitals backup goaltender Pheonix Copley knew how good Binnington was from their time together with the Blues' top minor league affiliate. Copley was the third goalie on Washington's first Cup-winning team a year ago and is thrilled to see his friend reach the final.

"He was a really good teammate and he's a great guy, and it's always good to see guys who have put in the work and deserve to be getting the opportunities and deserve to be getting the success that he's having," Copley said. "When you have a relationship with a guy, you always kind of root for him. That would be really cool, but it's cool to watch him with all the success he's having. He's put in the work."

There has been a lot of work put in for years when the Blues looked like a title contender. They looked anything like it during a 7-9-3 start that cost coach Mike Yeo his job, but interim replacement Craig Berube led the turnaround that got the Blues from last in the league on the morning of Jan. 3 to the playoffs and now the Cup Final.

Now that Oshie and Copley have championship rings of their own and the Capitals are out of the playoffs, they're rooting for the Blues to finish the job against the Boston Bruins.

"It would be special with their story with how they struggled earlier in the year and how they came together," Oshie said. "It would be a pretty cool story for them."