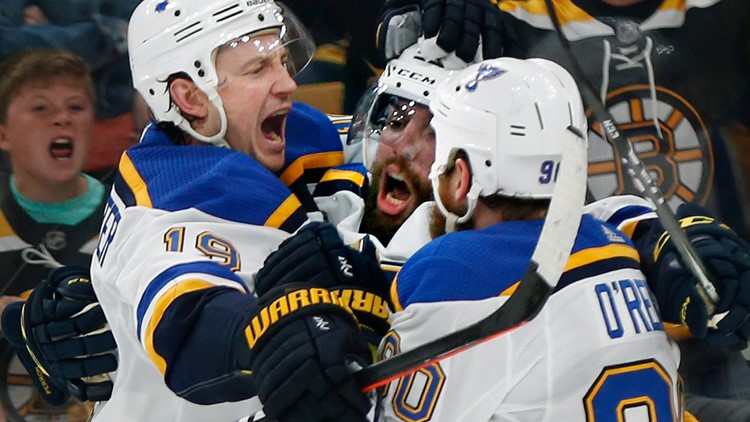 BOSTON — The roars for Zdeno Chara were thunderous, more so than usual for a guy that wasn't supposed to play after sustaining a broken jaw in Game 4 of the Stanley Cup Final.

When the Blues heard those roars from 17,565 at TD Garden on Thursday in Game 5, they knew they were going to be in for an emotional battle in a pivotal game to see who could come within a game of winning the Stanley Cup.

That's when you need your best player to be your goalie, and the rookie once again defied odds and stood tall amid more officiating controversy.

Jordan Binnington made 38 saves, including 17 when the Boston Bruins were bringing the onslaught, and the Blues got secondary scoring again from Ryan O'Reilly and David Perron, whose goal turned out to be the winning goal in controversial fashion of a 2-1 win against the Bruins to give the Blues a 3-2 lead in the best-of-7 series.

The Blues, in search of their first-ever Stanley Cup, survived Boston's wave after wave of pressure and are taking the series back to St. Louis with the chance to close out the series.

RELATED: Opinion | How the Blues are crafting a comeback story for the ages

Binnington made sure of it with his performance on this night.

"I don’t keep tabs," Binnington said if he felt this was his best game in the NHL. "I felt good tonight, the boys battled hard, and it was a big win, so hopefully we can carry that momentum into the next game."

The game, unfortunately, ended with more officiating controversy when the Bruins were not happy with a non-call on Blues center Tyler Bozak for what looked like a trip of Boston's Noel Acciari in the defensive zone. Play continued, and moments later, Perron's pass to Bozak at the back side caromed off the right leg of Boston goalie Tuukka Rask and into the net at 10:36 of the third period to give the Blues a 2-0 lead.

Fans began to litter the ice with debris, and when the replay was shown on the video board, it got even worse, to the point where fights among Bruins fans, of all things, broke out in the stands.

"It was just a puck battle, I don’t know," Bozak said. "I saw the puck there and went for it. He was down. I don’t really know what happened to be honest with you. Yeah, we’ll take it."

The Blues know all too well about missed calls. Game 3 of the Western Conference Final against San Jose, the missed hand pass call that led to a goal in overtime, will always be a reminder. But instead of complaining about that egregious miss, Bruins coach Bruce Cassidy decided to air out his grievances in public.

"The narrative changed after Game 3," said Cassidy, who accused Blues interim coach of Craig Berube of complaining about officials. "There’s a complaint or whatever put forth by the opposition. It just seems to have changed everything. The non-call on Acciari … their player is on his way to the box. It’s right in front of the official. It’s a slew foot. Our guy’s gone. The spotter took him out of the game for a possible concussion. I mean, it’s blatant. It had a big effect on the game.

"This has happened. I’m a fan of the game. It’s the National Hockey League’s getting a black eye with their officiating in these playoffs, and there’s another one that’s going to be talked about. I thought it was a great hockey game. That call, probably … there’s time, but it really made it difficult for us to get the win tonight. So I’m disappointed. So I guess to answer your original question, it was egregious. But we’re moving on. We’re getting ready for Game 6."

The NHL's director of officiating, Stephen Walkom, told a poor reporter: "We don't make comments on judgment calls within games. There are hundreds of judgment calls in every game. The official on the play, he viewed it and he didn't view it as a penalty at the time."

The Blues kept playing, and in the end, scored what proved to be the winning goal.

"I know there's something that the fans weren't too happy about, I don't know," Perron said. "From talking quickly to Bozie, I guess the puck was in [Acciari's] skate. He was playing the puck and there was an opening that O'Ry created by being really strong on the puck and poked it to me. I had Bozie backdoor. I tried to get it to him, I tried again and it went in. Good goal. For sure, a big goal.

"That's O'Ry's biggest quality right there, he never stops and he created a loose puck for me and I'm happy he saw me because I felt like there was an opening that I felt like was going to be created to me. Sure enough he did."

The Blues had to fight off Boston's late flurry too, but not before Jake DeBrusk scored with 6:28 remaining to make it a 2-1 game. But Binnington would shut the door down the stretch and when the Bruins pulled Rask.

"He was excellent all game and did a great job in the first period for sure," Berube said of Binnington. "They came hard, Boston. We were tested in the first for sure and Binner stood tall. Big reason we won the game."

He was for sure, and it enabled the Blues to get the lead early in the second when O'Reilly scored his third goal in two games, 55 seconds into the second period, off a feed from Zach Sanford, his third assist in as many games.

Sanford, with his back to the play, slid a backhand pass through his legs, through Charlie McAvoy's legs as he and Chara chased him behind the net, to O'Reilly, who calmly tucked a backhand over Rask's glove for a 1-0 lead.

"On that goal, I'm coming in late and these guys are working to protect the puck and obviously he's got outstanding vision and I was able to find it and put it in, but we work well together," O'Reilly said. "From earlier in the year, we've found a way to ... we all kind of complement each other well."

Sanford was playing in his first game in TD Garden. He was born in nearby Salem, Ma., a 30-minute drive to the north.

"It started with an awesome play by Perron there to hold the puck and keep that alive while we were finishing a change," Sanford said. "We're always talking on the ice. O'Ry's letting me know where he is and the same thing with DP. I was able to find him there and it was a pretty sweet finish by him."

Now the Blues will try and finish it off in their building, which will be rocking, and with the Stanley Cup inside.

"Come along obviously from where we were, but just the feeling in the locker room after this, it’s a good win," Blues defenseman Alex Pietrangelo said. "Binner was good. But got a lot of work to do. We’ve still got another game. We’ve got a couple of days here to look at a lot of things, but we’re trying to keep our emotions level here."

St. Louis baby becomes youngest to ever be in the Stanley Cup