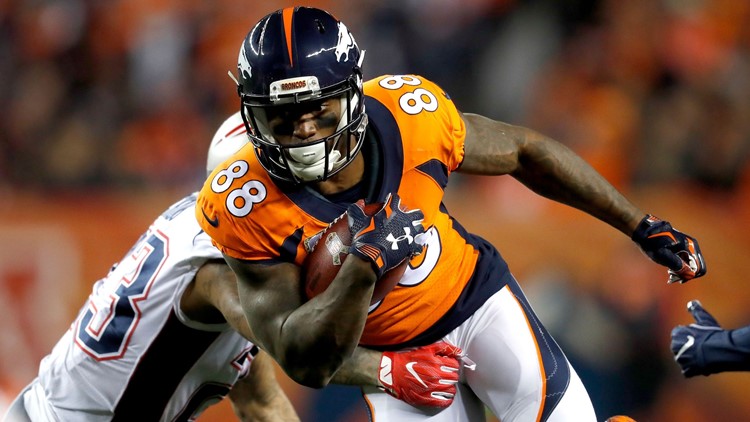 Photo by: AP Photo/David Zalubowski
Denver Broncos wide receiver Demaryius Thomas (88) runs after the catch against the New England Patriots during the first half of an NFL football game, Sunday, Nov. 12, 2017, in Denver.

The 31-year-old most recently played for the Houston Texans, but made a name for himself a mile above sea level in Denver, helping the Broncos capture Super Bowl 50 in 2015-16.

Denver traded Thomas to Houston in Week 9 of last year's season, cutting his ninth season with the team in half. He tore his Achilles in Week 16 and was placed on injured reserve. The Texans released him in February.

The 6-foot-3, 229-pounder is one of only three players to reach 1,400 yards and 10 touchdowns receiving in three consecutive seasons, which he accomplished from 2012 to 2014. The others: Marvin Harrison and Jerry Rice.

Thomas has caught more than five touchdowns in all but two seasons — his rookie and sophomore years. He hasn't eclipsed 1,000 yards receiving in a regular season since 2016.

The Patriots' depth chart currently lists Julian Edelman and Phillip Dorsett as the two starting wideouts, with Thomas and Bruce Ellington as second-strings.