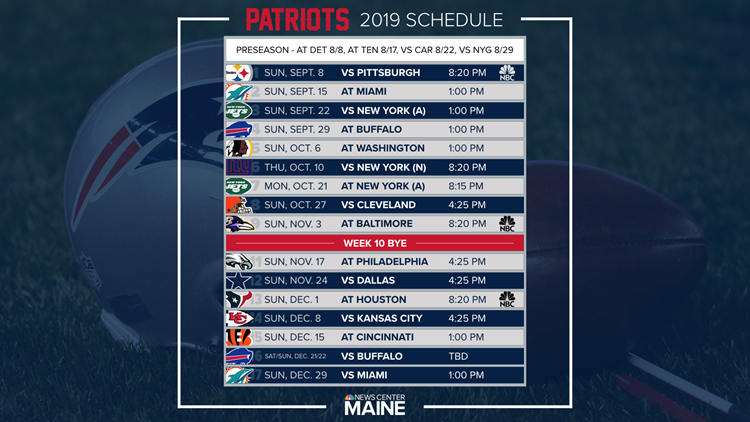 FOXBORO, Mass — The New England Patriots will kick off the 2019 regular season at home against the Pittsburgh Steelers on NBC's 'Sunday Night Football'; face a remodeled Cleveland Browns squad on Oct. 27; and, in a rematch of last year's AFC title game, take on the Kansas City Chiefs in Week 14.

The Patriots are one of six teams to get the maximum number of prime-time games. Also with five: Chiefs, Packers, Seahawks, Steelers and Rams.

New England's second game against division foe Buffalo, being played at Gillette, is one of five Week 16 matchups currently in semi-limbo. Three are being schedule for NFL Network on Saturday, Dec. 21, and the non-Saturday games will be played on Sunday.

The NFL's 100th season kicks off Sept. 5 with Green Bay at Chicago for the 199th meeting of a series that began in 1921. That Thursday night slot is usually reserved for the Super Bowl champions to host; however, this year's classic rivalry matchup forced New England to open three nights later.

The Associated Press contributed to this report