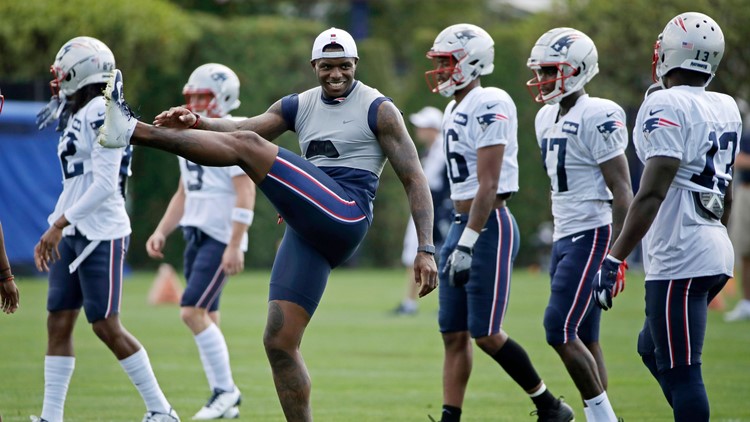 BOSTON — Josh Gordon's winding career has included several second chances following a trail of multiple drug suspensions that cast doubt whether the talented but troubled playmaker would ever get on an NFL field again.

He's getting yet another opportunity.

The NFL conditionally reinstated the Patriots wide receiver on Friday.

Commissioner Roger Goodell notified Gordon that on Sunday, Gordon can rejoin the team for meetings and conditioning and individual workouts. After that, according to a league statement, "Subject to appropriate progress on clinical care and other arrangements, he will be permitted to participate in team activities, including practice."

But Gordon is barred from next Thursday's game because of a lack of sufficient conditioning and practice time.

Gordon had been suspended indefinitely since December 2018 for violations of the league's substance abuse policy.

The Patriots have stayed mostly mum this preseason about the potential of Gordon rejoining the team, with coach Bill Belichick saying earlier this month, "We don't have anything to do with Josh Gordon. He's suspended. You need to talk to the league. We have no control over Josh Gordon."

Gordon has been suspended several times by the NFL for violations of its drug policies since being drafted by the Cleveland Browns in 2012, and missed the entire 2015 and 2016 seasons.

After being reinstated in 2017, Gordon revealed in an interview with GQ magazine that he drank or used marijuana before games. "Probably every game of my career," he said.

Gordon also said in a 2017 mini-documentary on Uninterreupted.com that he took Xanax, cocaine, marijuana and other narcotics.

Now he'll return to a Patriots environment in which he was mostly insulated last season and even flourished in their highly disciplined culture.

Gordon's outlook certainly improved last season after a September trade when the Browns felt it was time to cut ties. He had 40 receptions for 720 yards and three touchdowns with the Patriots, five years removed from an All-Pro season in 2013 with 87 catches for 1,646 yards and nine touchdowns.

His return seemingly comes at a perfect time for the Patriots who are eagerly awaiting the return of Julian Edelman from a thumb injury and have been struck by a series of injuries at receiver this preseason.

But there are no guarantees Gordon can help the team given his history of suspensions.

Still, he has never lost the support of his teammates.

Tom Brady, who worked out with Gordon in the offseason, is one of those supporters.

"There weren't many opportunities, but he was around and I needed someone to catch," Brady said last month when asked about the workout. "I've always enjoyed playing with him and obviously hope everything works out for him. I'm hoping the best, certainly."