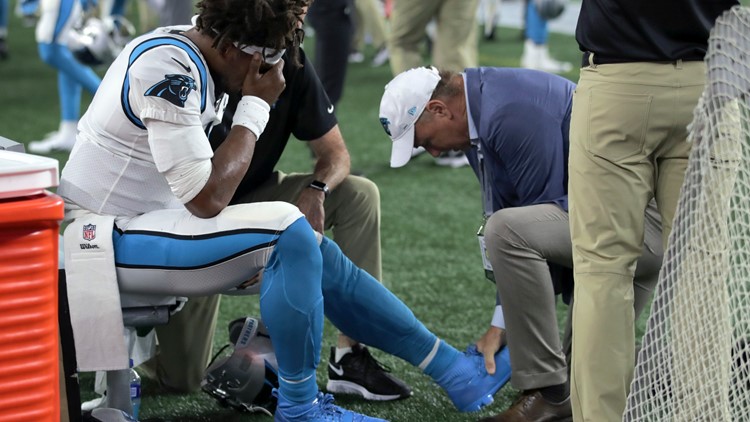 Photo by: AP Photo/Charles Krupa
Carolina Panthers quarterback Cam Newton receives attention on the sideline after an injury in the first half of an NFL preseason football game against the New England Patriots on Thursday, Aug. 22, 2019, in Foxborough, Mass.

FOXBOROUGH, Mass. — This was not the return to the field that Cam Newton was hoping to make.

The Carolina Panthers quarterback left Thursday night's 10-3 exhibition loss against New England in the first quarter with a foot injury that left him grimacing on the sideline.

The 2015 MVP was playing for the first time since Dec. 17, when the team shut him down for the last two games of the season because of shoulder fatigue that prevented him from throwing the ball downfield. He had arthroscopic surgery in January and did not play in the first two preseason games.

Newton appeared to be injured when he was sacked for a loss of 8 yards by Adam Butler on a third-and-10 from the Carolina 31. It was one of two Patriots sacks while Newton was in the game.

Newton was initially evaluated on the sideline and quickly accompanied to the locker room and did not return. He went 4 for 6 for 30 yards.

Kyle Allen took over at quarterback in the second quarter.

The Panthers were pretty pedestrian on offense and went three-and-out in each of their first two series.

Tom Brady finished his first exhibition game of 2019 by going 8 for 12 for 75 yards, including an 18-yard pass to tight end Ryan Izzo to set up the 1-yard touchdown plunge by James Develin in the second quarter. It was the starting offense's final series.

Patriots rookie quarterback Jarrett Stidham was 15 for 19 for 134 yards.

Panthers: OT Greg Little was evaluated for a concussion in the fourth quarter.

Patriots: Special teamer Brandon King was carted off the field with about a minute to go in the first half after helping block on a punt return.  ... RB Damien Harris left in the second quarter with an undisclosed injury.