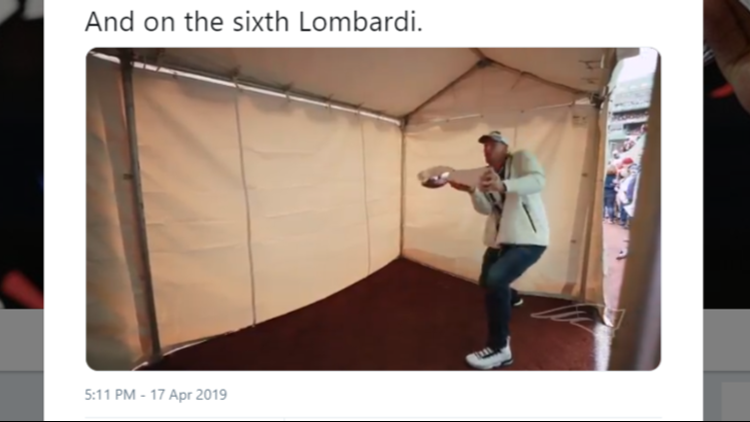 Gronk dented the Patriots' 6th Lombardi Trophy with a bunt

BOSTON — The ball rolled perfectly down the imaginary first-base line. A superb bunt.

But no, this was just former Patriots tight end Rob Gronkowski, two weeks after announcing his retirement, using the team's sixth Vince Lombardi Trophy as a baseball bat to bunt a pitch from longtime teammate Julian Edelman.

The trophy was dented, as evidenced in a video production put together by Patriots staff and posted to social media Wednesday, in which Gronkowski can be seen laying down perhaps the most expensive bunt of all-time.

It all happened April 9 at the Boston Red Sox home opener when Gronk and other Patriots visited Fenway Park to celebrate their Super Bowl win.

He, Edelman and cornerback Stephon Gilmore were all slated to throw out synchronized ceremonial first pitches before Boston's game against Toronto.

The cameras were rolling as the trio warmed up underneath a white tent.

"It was all fun and games until it wasn't," said special teamer Matthew Slater.

"Gronk thought of a great idea. He'd play around and get a swing in. As he's lined up, Jules is the pitcher, Gronk's standing there and I think we're all under the impression – I mean, no way is he gonna swing a Lombardi Trophy."

Edelman, the Super Bowl LIII MVP wide receiver, threw the ball toward Gronkowski, who went from a batting stance to squaring up for a bunt.

Then, the sound of baseball meeting sterling silver.

RELATED: Tom Brady flicks confetti from helmet in 'back at it' video

From now on, when all six of New England's Lombardi trophies are lined up, there will always be that looks a bit different. It's the mark Gronkowski left, his teammates said — a parting gift that has made No. 6 vintage.

"If anybody could do it and get away with it, it would be Mr. Gronkowski himself," said defensive back Duron Harmon. "He has now left an everlasting mark so that people will never forget that he was a part of that championship team."

This wasn't the first time Gronkowski has had some fun during a Fenway Park celebration. He hilariously stole Tom Brady's Super Bowl LI jersey in 2017 — the one recovered by law enforcement after going missing — and the GOAT chased him around the diamond for a few seconds before they both fell down.

The trophy will make one if its first appearances since the dent was shaped this Friday at the Maine State House in Augusta.