'Call me Mr. Recovery': Gronkowski revealed Tuesday he has helped launch a line of fitness-oriented CBD products with a R.I.-based supplier. 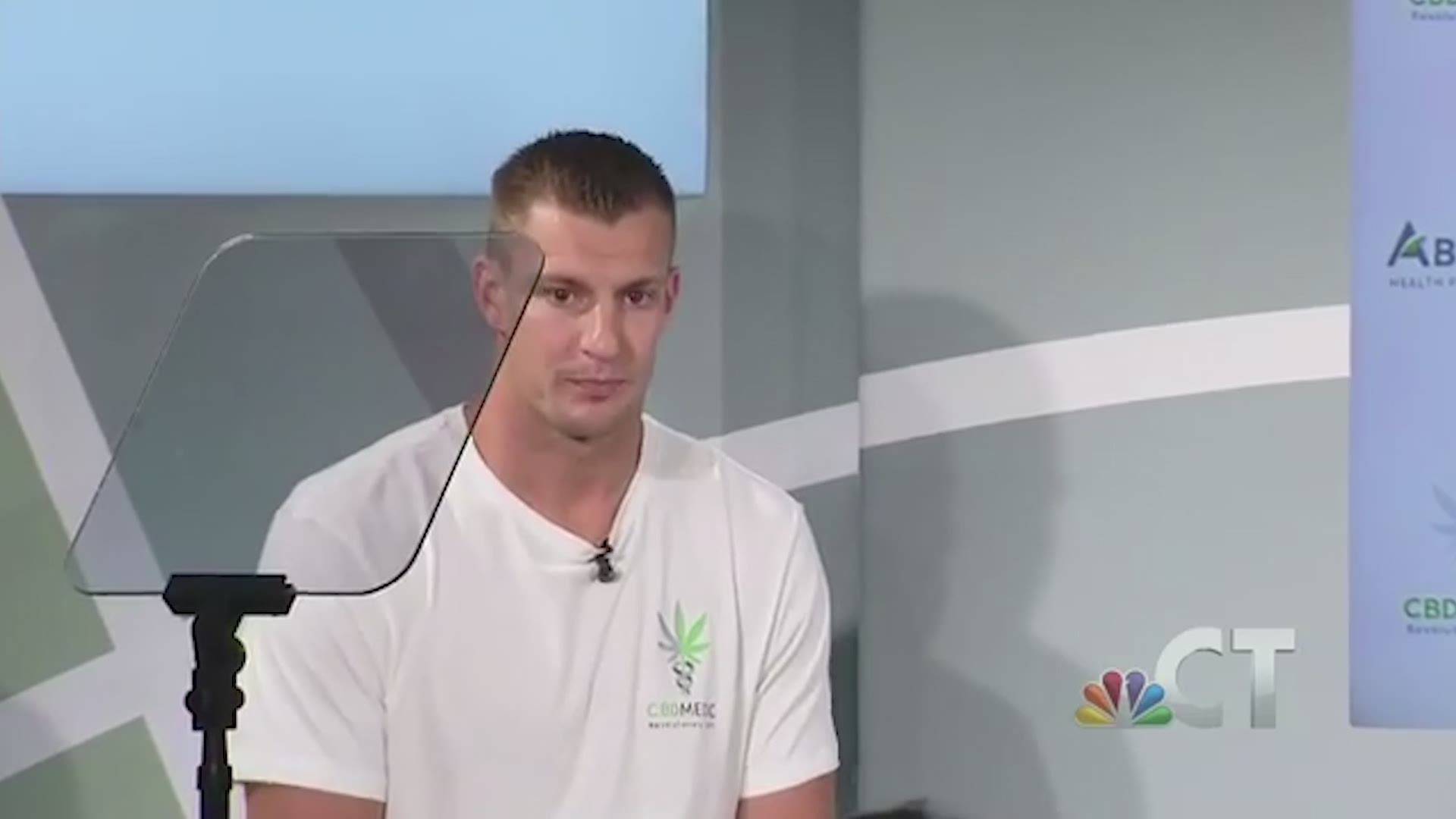 The 30-year-old promoted a product called CBDMEDIC, which he said has made him "pain free" for the first time since his college years, and also lobbied for a change in sports governing bodies' stance on the phytocannabinoid.

In the presser, Gronkowski talked about his nine grueling seasons of NFL football with the Patriots, and specifically referenced the impact they had on his body.

"During that time, I had countless injuries and nine surgeries, which took an absolute beating on my body and my soul," he said. "I was hurt both mentally and physically, day in and day out. I decided to walk away from the game for one main reason: I had to recover. That's why you haven't seen me for five months. I've been rebuilding myself, and finding a new way."

Gronkowski said that a few months ago, his dad, Gordon, introduced him to CBDMEDIC, which he uses to treat back pain on a daily basis. Gordon gave him some to try, he said, and he was "blown away by how well it worked."

The three-time Super Bowl champion said he immediately incorporated the product into his recovery, and has enjoyed the results.

"And now, for the first time in more than a decade, I am pain free," Gronkowski said. "And that is a big deal."

Gronkowski went on to advocate that sports governing bodies change their stances on CBD, saying that "it's just time," and that it may have made a huge difference for him during his playing career had he been able to use it.

The 6-foot-6-inch future Hall of Famer known as "Gronk," or "Gronky" by Tom Brady's daughter Vivi, ended his pitch saying, "You can call me Mr. Recovery."

RELATED: Gronk announces his retirement from the NFL

Gronkowski retired from the NFL in March. Some rumored that Tuesday's news conference would entail him announcing a return, but that didn't happen.

When asked by a reporter if there were any potential plans to come back, Gronkowski responded rather emotionally.

"I want to be clear to my fans, I needed to recover," he said. "I was not in a good place. Football was bringing me down. And I didn't like it. And I was losing that joy in life. I'm sorry right now but – I really was, and I was fighting through it."

Gronkowski said he's very satisfied with where he is now, and that he's on the right path. He also said he's aware other players in the NFL are dealing with similar issues he had been going through while playing.

"If I have the desire to play football again, if I feel passionate about football again, if I'm feeling like I need to be out there on the field, I will go back to football," he said. "But as of right now, that is not the case. It could be the case in six months, it could be the case in two years … but I truly don't see it in the foreseeable future in like a week or a month."

RELATED: Gronk gets bonked by beer can during Super Bowl parade

CBDMEDIC, owned by Abacus Health Products, Inc., is domestically based in Woonsocket, Rhode Island. The company's website advertises its products as being available at select CVS Pharmacy locations.

Gronkowski is shown in several of the company's marketing efforts, including for a line of pain relief products: Active Sport, Muscle & Join, Back & Neck, Arthritis and Massage Oil. Active Sport is listed as $39.99 for a 1-ounce solid sport stick.