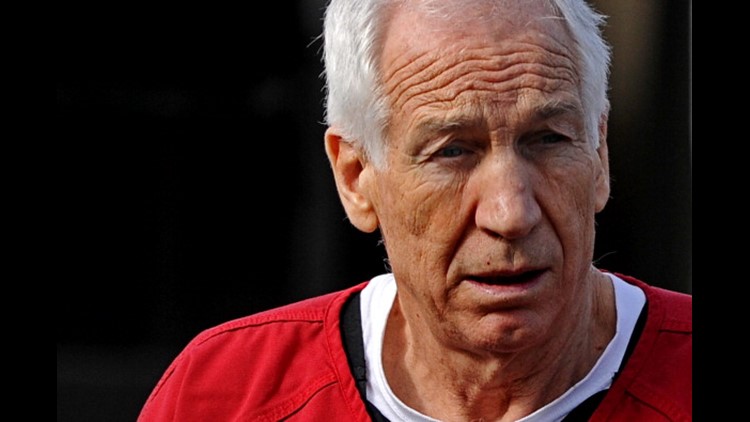 The 41-year-old Sandusky is being held on $200,000 bail and is prohibited from any contact with minors.

Sandusky's father, Jerry, was convicted of sexually abusing 10 boys and was sentenced to at least 30 years in prison at the age of 68 -- essentially a life sentence.

According to police, Jeffrey Sandusky attempted to obtain explicit material from a minor under the age of 18 -- referred to as victim No. 1 -- via text messages in March 2016. The minor's mother was dating Sandusky at the time and had been for six years. Sandusky lived with the woman and her children for five of those years.'

Victim No. 1's father contacted police on Nov. 21, 2016, and said Sandusky sent his son texts requesting the material on March 1 and 2 of that year. The father then provided proof of those messages to police, per the complaint. In one message, Sandusky allegedly said it wasn't weird to receive the material because he is "studying medicine."

Sandusky is then accused of demanding the victim erase all the incriminating texts and that nothing be mentioned to anyone. Sandusky requested a meeting to talk things over, but the victim responded "we don't need to talk and we aren't going to" before adding these were the actions of a "rapist."

Sandusky also is accused of engaging in sexual intercourse with a minor under the age of 16, referred to as victim No. 2 in the complaint. That alleged offense took place in 2013, when Sandusky was 37.

According to NBC News, Sandusky has been suspended from his job at Rockview State Correctional facility.