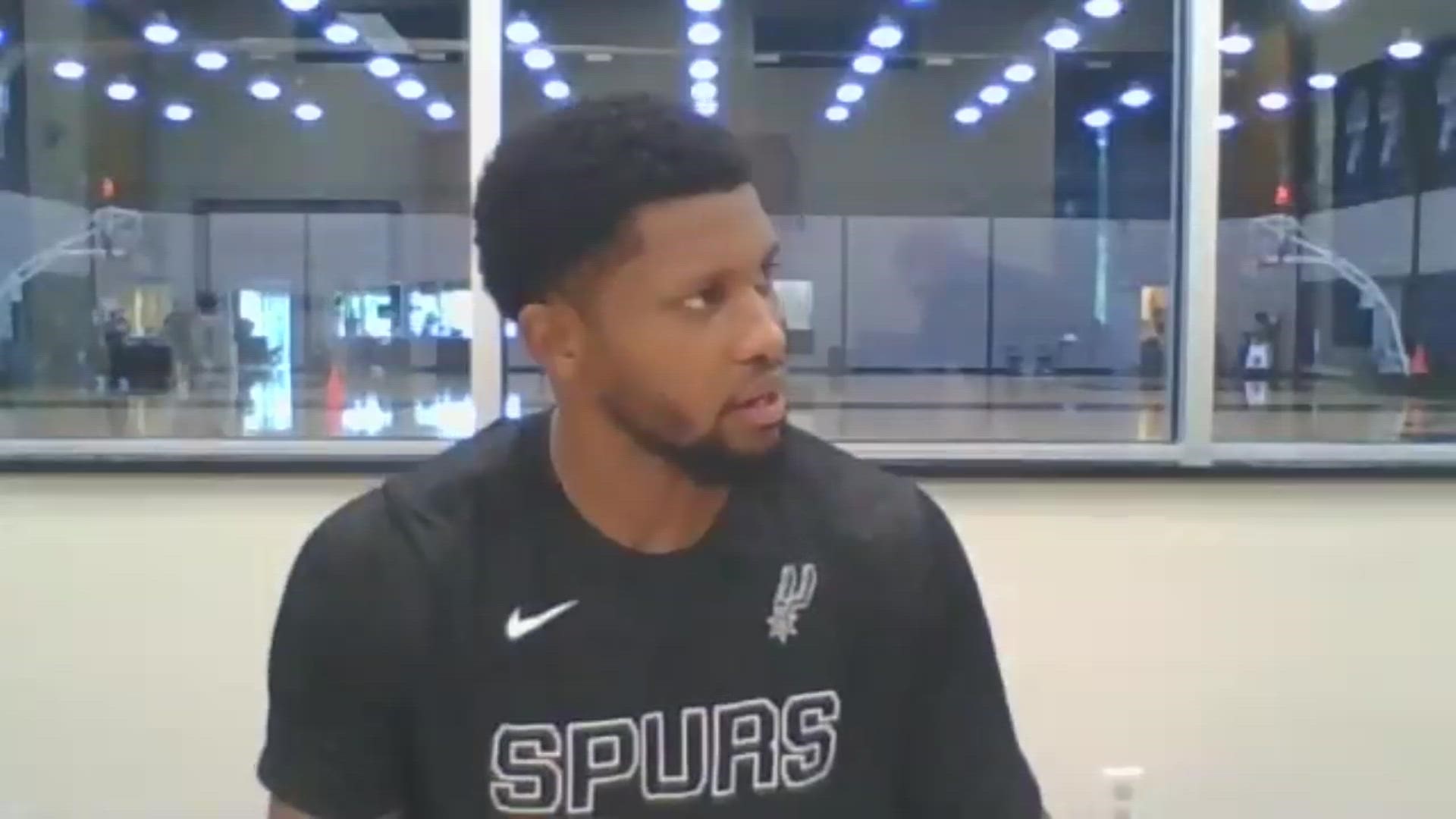 SAN ANTONIO — The Spurs were back at it Monday, going through individual workouts at their practice facility and continuing to prepare for the start of training camp later this week in Orlando, Fla.

Besides refocusing on basketball and looking ahead to their final eight regular-season games, the players are working to adapt to the "new normal" after the outbreak of the deadly coronavirus.

"It feels good to see your teammates from a distance," veteran forward Rudy Gay said in a Zoom call with the media. "Still seeing everybody working and trying to get back to normal."

With the country reeling from the spread of COVID-19, the NBA has implemented a long list of safety protocols that Spurs guard DeMar DeRozan described as "overwhelming" last week.

Per a mandate from the league office, even individual workouts are held with a limited number of players in the gym at one time, and teams are prohibited from going five on five until they arrive in Orlando.

Gay was asked what he thinks his concern level will be when Spurs coach Gregg Popovich, the oldest head coach in the NBA at 71, is around the players. People 65 and older are considered to be at a higher risk to become severely ill if they contract COVID-19, health officials say.

"We have special guidelines that we have to abide by," said Gay, 33. "I think going into this bubble, everybody has to take proper precautions and do their own part going into it because of situations like that. Because of Pop, because of some of the older guys on the staff.

"Not just our team but other teams. It's definitely serious. It's a serious issue. We've vowed to do the right thing, so we have to do it."

Given the numbers since players started returning to work out, they will have little room for error in the context of keeping the virus at bay. Seven of the 22 teams that will play in Orlando have had to close their workout facilities in the past week because of positive COVID-19 tests.

Credit: Reggie Thomas / San Antonio Spurs
Spurs forward Rudy Gay has played with four NBA teams since getting selected by the Houston Rockets with the No. 8 overall pick of the 2006 NBA Draft.

The Silver and Black are among the 22 NBA teams that will resume the 2019-20 season in Orlando at the end of the month. San Antonio plays Sacramento on July 30 in its first game since beating Dallas on March 10.

All games of the NBA's reboot will be played at ESPN's Wide World of Sports on the Walt Disney World Resort campus, which will be the league's headquarters through the end of the Finals.

Each team will have three scrimmages before resuming the season. The Spurs, who leave for Orlando on Thursday, take on the Milwaukee Bucks in their first scrimmage July 23. Every team will play eight regular-season games.

All players, coaches, and league officials will be sequestered at the Disney World Resort "bubble" for the duration.

San Antonio (27-36) trailed Memphis by four games for the eighth and final playoff spot in the Western Conference before the pandemic made sports an afterthought.

Credit: Photo by Antonio Morano bit.ly/XR79FT / Special to KENS5.com
Rudy Gay scored 17 points in the Spurs' 119-109 win over Dallas on March 10 in the team's last game before the NBA season was suspended the next day.

Gay expressed confidence that he'll be ready to play when the Spurs resume their season.

"It hasn't been that challenging for me, to be honest with you," Gay said when he was asked how challenging it's been to return to the court after such a long layoff. "I'm into fitness and staying healthy and my diet. As you get older, up in your age and longer in the league, you kind of never have to get out of shape.

"Definitely, it's a different mindset being on the court. But as far as being in shape and being able to snap back, I kept a good handle on that."

Gay is in his third season with the Spurs and 14th in the NBA after getting selected by the Houston Rockets with the No. 8 overall pick of the 2006 league draft. He was traded to Memphis two weeks later and has played with four teams during his pro career.

Gay averaged 10.0 points, 5.4 rebounds and 21 minutes in 60 games before the season was interrupted by the country's worst health crisis in a century.

Besides working to stay in shape during the layoff, Gay kept himself busy by reading and focused on broadening his horizons

"I kind of spent this time to better myself," he said. "Read some books, learned some new trades. Lifted some weights, thought about basketball a little bit."