Spurs' Derrick White happy to be back on the court again 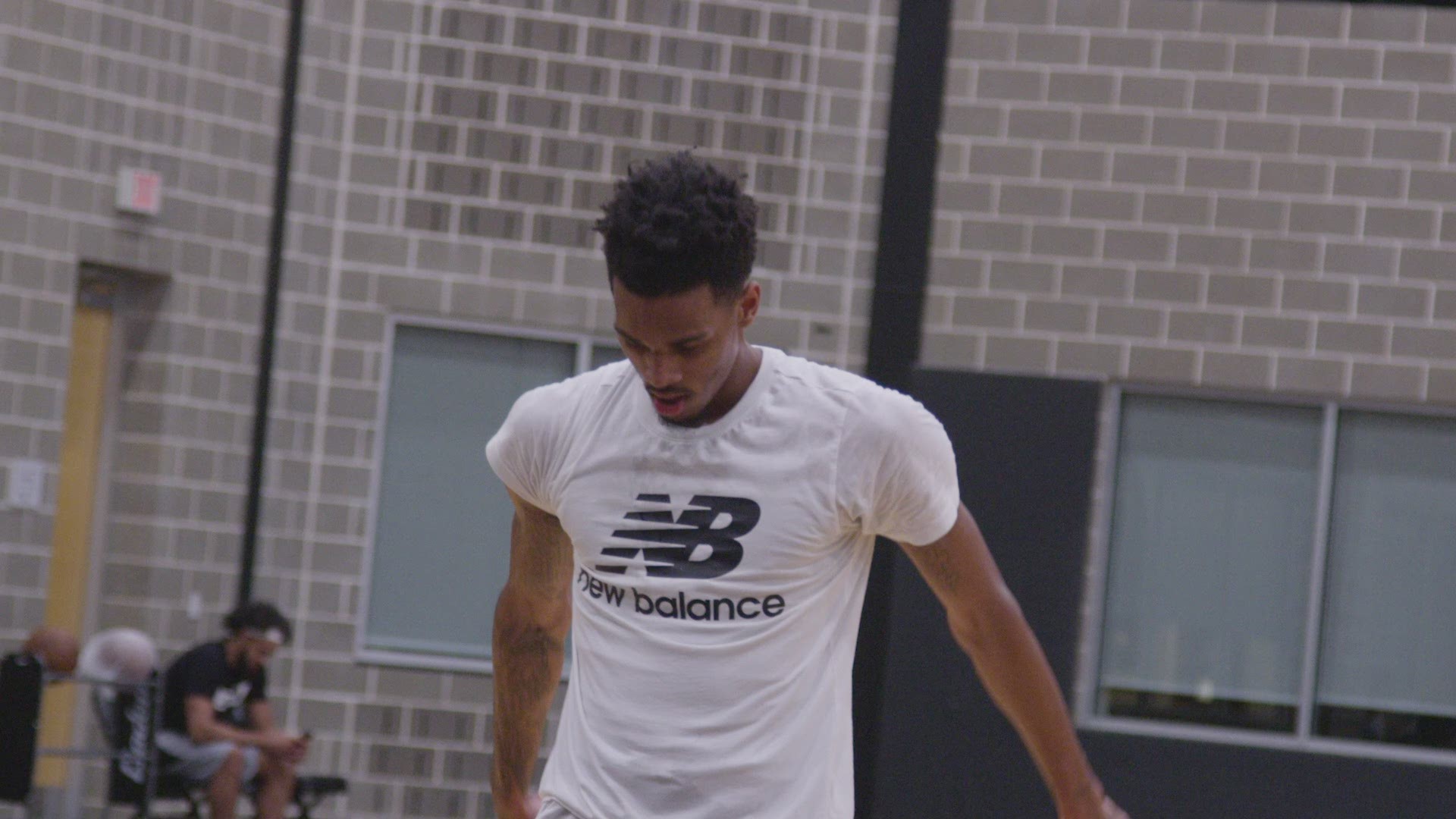 SAN ANTONIO — Spurs guard Derrick White's game is a little rusty after the NBA suspended the season more than three months ago, but the coronavirus pandemic has had no ill effect on his dry wit.

One of the team's better defenders, White was asked Friday during a Zoom call with the media if he's missed playing defense during the long layoff.

"I was guarding my dogs in the kitchen, trying to cut them off," White said, smiling.

When White talked about how difficult it was to stay in "basketball shape" with the Spurs' practice facility shut down until recently, a reporter asked him if he had a hoop at his home.

Known for his easygoing demeanor off the court, White is all business when he laces up his shoes and steps on the floor. He has earned the respect of his teammates with his passion and hard-nosed play.

A day after turning 26, White was back at the Spurs' practice facility working on his conditioning and basketball skills.

"It feels great to be back in the gym," White said. "I'm enjoying it."

The Silver and Black have worked in groups of three to four players since returning to their practice facility this week. Under the NBA's protocol, they won't be allowed to have five-on-five workouts until they arrive in Orlando, Fla., next Thursday.

"It's good to get back in a routine, get a rhythm," White said.

Credit: Photo by Antonio Morano bit.ly/XR79FT / Special to KENS5.com
Third-year Spurs guard Derrick White started 13 of the 61 games in which he played before the NBA season was suspended March 11.

The Spurs are among the 22 NBA teams that will resume the 2019-20 season in Orlando on July 31. All games will be played at ESPN's Wide World of Sports on the Walt Disney World Resort campus, which will be the league's headquarters through the end of the Finals.

All players, coaches, and league officials will be sequestered at the Disney World Resort "bubble" for the duration. The Spurs will play the Sacramento Kings in their first game since they beat the Dallas Mavericks on March 10 at the AT&T Center.

San Antonio (27-36) trailed the Memphis Grizzlies by four games for the eighth and final playoff spot in the Western Conference before the pandemic made sports an afterthought.

While team facilities were closed during the pandemic, players tried to stay in shape by participating in virtual workouts via Zoom or training on their own.

"It wasn't easy," White said. "I definitely came back a little out of shape. It's hard to mimic basketball shape without actually playing basketball. I tried to do anything that I could to stay in shape. Eat right, do whatever it takes

"There was a couple of times you get into a gym, but that was kind of rare throughout the whole quarantine. Just staying at home and working out like everybody else was doing."

While some NBA players have opted not to play in Orlando, White left little doubt

"I feel like, individually, whatever people want to do," White said. "I understand guys that will sit out for their personal reasons. I get that. For me, personally, I didn't really think too much about not playing.

"I'm just going to go out there with my teammates and do what I love to do. Personally, I didn't think about it too much, but I get people that are staying back for safety reasons or whatever it might be."

White plans to pay tribute on his basketball shoes to Elijah McClain, who died last August while in police custody in Aurora, Colo.

"There are a lot of cases out there, but it was in Colorado and I'm a Colorado guy," White said. "That kind of drew me to it more than anything. Obviously, what happened to him was tragic and sad. I just want to honor him and his family."

The Silver and Black will play without power forward LaMarcus Aldridge, who had surgery on his right shoulder in April and is out for the season. Aldridge was the team's second-leading scorer (18.9) and top rebounder (7.4).

White fell back on his humor when he was asked what the Spurs will do to compensate for Aldridge's absence.

"I think (center) Jacob (Poeltl) has been working on his turnaround jumpers, so we'll be all right," White said, referring to Aldridge's signature shot. "Obviously, you can't replace L.A., 20 and 10 every night (20 points, 10 rebounds).

"We're going to have to do it by committee. Everybody's got to do a little bit more. Just step up and try to make up for his (Aldridge) loss."

Zeller has been in San Antonio since last Thursday, a day after hearing from the Spurs.

"It's been wild," said Zeller, who also participated in the Zoom call. "I flew down and had to all the (COVID-19) testing on Friday, testing again on Saturday. I was able to work out this week.

"Just trying to get used to the new coronavirus protocols. It's been a whirlwind, but it's been fun. I'm happy to be back playing basketball and being part of a team, especially a great team like the Spurs."

RELATED: Spurs adapting to being back in their practice facility and living with challenges of COVID-19