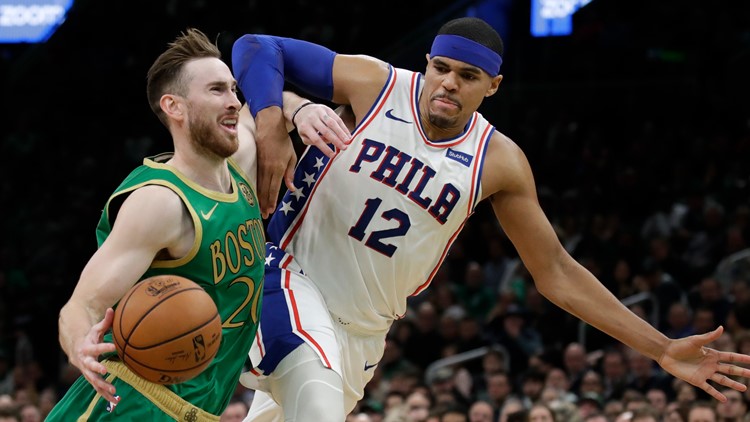 Photo by: AP Photo/Elise Amendola
Boston Celtics forward Gordon Hayward drives against Philadelphia 76ers forward Tobias Harris in the second half of a game on Thursday, Dec. 12, 2019, in Boston.

Sixers remind Celtics what losing feels like at home

BOSTON — Joel Embiid and the Philadelphia 76ers have continued their hot streak by handing the Boston Celtics their first home loss of the season.

The Sixers’ center scored 16 of his 38 points in the fourth quarter and had 13 rebounds to lead a 115-109 victory over the Celtics. Embiid hit five of six free throws in the final 26 seconds and blocked a shot by Daniel Theis in the waning moments to help the 76ers secure their fourth straight win and eighth in nine games.

Embiid was dominant after being chided on television by former NBA players Shaquille O’Neal and Charles Barkley earlier this week for being too passive.

Tobias Harris had 23 points, eight rebounds and seven assists to help Philadelphia take over first place in the NBA’s Atlantic Division, one game ahead of Boston.