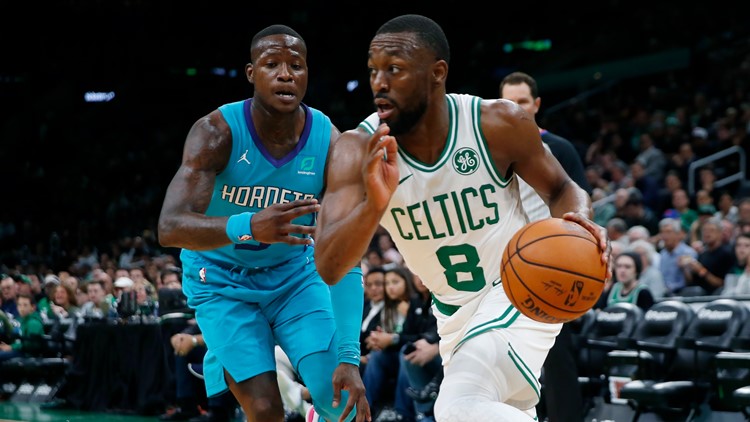 Photo by: AP Photo/Michael Dwyer
Boston Celtics' Kemba Walker drives past Charlotte Hornets Terry Rozier during the first half of a preseason game in Boston on Sunday, Oct. 6, 2019.

Rozier's return to Boston as a Hornet is less than triumphant

MEMPHIS, Tenn. — At Memphis, Jaren Jackson Jr. scored 19 points and Grayson Allen had 18 on 7-for-10 shooting as the Grizzlies won easily.

Morant, the No. 2 pick in this year's draft, scored off a baseline drive on the game's first possession and finished with 10 points and seven assists as Memphis topped Maccabi Haifa 123-88 on Sunday in the Grizzlies' preseason opener.

Morant played 18 1/2 minutes, shooting 5 for 8 from the floor and adding three rebounds. He checked out for the final time midway through the third quarter.

He showed some flashes of what Grizzlies fans can expect this season, particularly a sequence in the final minute of the first quarter when he had a dunk, then a driving left-handed layup, then found Bruno Caboclo for a 3-pointer to end the period and give Memphis a 26-16 lead.

In the second quarter, Morant had assists on consecutive possessions to push Memphis' lead out to 17 and the Grizzlies remained in control from there.

Dillon Brooks scored 16 points for Memphis. Grizzlies center Jonas Valanciunas was held out with a sore foot that wasn't believed to be serious.

At Boston, Jayson Tatum scored 20 points and Javonte Green added 15 on 7-of-7 shooting for Boston.

Kemba Walker, acquired via sign-and-trade from Charlotte in July, had 12 points in his Celtics debut.

RELATED: No NBA team has a bigger reason to celebrate National Taco Day than the Celtics

Rookies P.J. Washington led Charlotte  with 16 points and Caleb Martin had 13. Miles Bridges had 12 points and 10 rebounds and Terry Rozier - who was came to the Hornets from Boston in the deal for Walker - added nine points and nine assists.

At Honolulu, Maurice Harkless had 16 points on 7-of-7 shooting and JaMychal Green scored 13 points for Los Angeles.