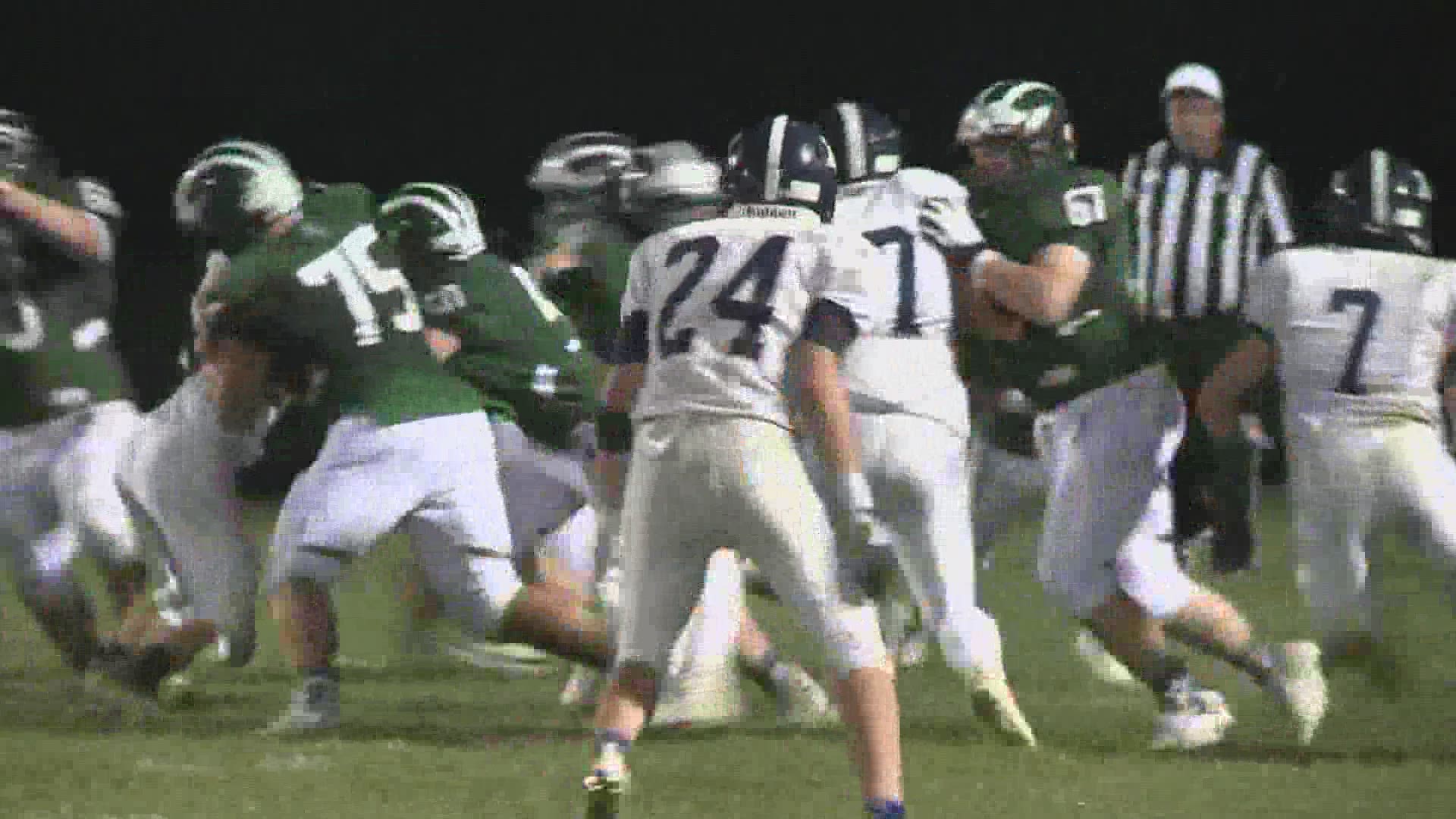 MAINE, USA — The Maine Principals' Association (MPA) voted unanimously to accept medical guidelines and will start to move forward with fall high school sports. MPA Executive Director Mike Burnham stressed it's a working document and will consult with multiple state agencies to ensure the safety of all Maine student-athletes.

Guidelines include encouraging players to keep mouth guards in at all times, more official timeouts so players can hydrate with their own water bottles, and coaches and players on the bench wearing masks.

Burnham adds local school boards and superintendents can make their own fall sports decision as they choose. Camden Hills announced last week it will not play sports this fall.

Although the MPA approves the plans, the state government, and local school districts need to as well.

It's not the good or bad news hundreds of student-athletes, coaches, and parents have been waiting for, but it at least eliminates the daily anxiety waiting for a decision regarding the fall sports season.

During a Wednesday media advisory meeting, the Executive Director of the Maine Principals' Association, Mike Burnham said the final fall sports plan will be announced no later than Thursday, August 27.

"We’re working the phones and we’re doing a lot of work behind the scenes. We will have a decision by next Thursday," Burnham added.

During the two hour meeting, the MPA and members from news outlets across the state discussed every aspect of the decision and the process.

Burnham added the MPA wants to have a uniformed decision in accordance with multiple state agencies that are working on the state's return to school plan.

Even though the final decision will be made next Thursday, phase four of the MPA's return to sports plan is still in effect on Monday.

Phase four is no different than phase three, except only fall athletes can participate in activities.

Outdoor workouts of up to 100 kids are permitted, ten athletes for indoor sessions. No one-on-one drills are to be conducted, but social distant team drills are acceptable.

Burnham noted these are still summer programs and not affiliated with preseason practices or tryouts.

Now that high school athletes have a decision date, let's take a look at how we got here:

If you polled most Mainers and asked what their favorite day of the workweek was, It wouldn't be a stretch to assume most people would say Friday.

Why? Because casual Friday's mark the end of the workweek and kickstart weekend getaways, plans, and relaxation time.

And when kids go back to school, Friday nights mean a lot more to roughly 20-55 high school students in every Maine town.

During the fall, communities across the state put on team colors, paint their faces, make signs, and rally around their high school football team in a real-life, weekly version of 'Friday Night Lights'.

But this fall, for the first time since the installment of light poles around fields and stadiums, those lights may never be turned on.

When the coronavirus pandemic forced schools to send students home to complete the school year online, the cancelation of the spring sports season soon followed. Ending athletic careers without a 'Senior Game' for hundreds of kids.

Back then, canceling a season was labeled as 'drastic', but now in August, six months later, history is close to repeating itself.

For months, the Maine Principal's Association (MPA) has been meeting in its specific sports committees, working with superintends and school districts, and consulting with the Maine Department of Education (MDOE), to find the best course for the return of sports.

On Tuesday, the MPA held it's Interscholastic Management Committee meeting. It was expected the final decision on the fall season would be announced, but instead, it was an announcement of a delay.

“We know time is of the essence and that we need to make a decision and we will be making a decision,” Executive Director of the MPA Mike Burnham said.

“As we continue to move forward and our work with all of these various groups we know that we can't delay this and that schools are looking for guidance from our office and we will be providing that."

The delay comes due to conflicting guidelines set out by the MDOE’s return to school and physical education plan and the Department of Economic and Community’s community sports plan.

“We will continue to work through the issues with those agencies,” Burnham added.

Another day of no news for Maine's cross-country, golf, football, field hockey, soccer, and volleyball players, like an all-caps 'IDK' text message.

Back in the summer, ‘everything was on the table’ as the possibilities of switching sports seasons, playing some sports in the fall and some in the spring, and everything in between was discussed.

When asked what was on the table now, Burnham said the MPA is just looking to create guidelines for the return to sports before specifying what sports can or can not be played, if that conversation is warranted.

“(After we have the guidelines) then I think that leads to those types of discussions,” he added.

The summertime is typically relaxing for school administrators. After nine months of hard work, June, July, and August are meant to take a vacation and recharge the batteries.

But when it comes to preparing for a school year and sports season in the middle of a pandemic, there are no days off.

In June, Thornton Academy athletic director Gary Stevens launched the Pandemic Project Task Force. Offical name, but the group is more of an idea incubator than a governing body.

RELATED: “Everything is on the table." A group of athletic directors is trying to plan a safe return to fall sports

“(It's) what educators call a professional learning community. Where you have a group of people meet periodically to talk about their craft," Stevens said earlier this summer.

Since its inception, the group has grown to more than 200 participants meeting via Zoom every two weeks. The ninth meeting is scheduled for Aug. 24.

Credit: NEWS CENTER Maine
Portland is one of the teams that will move from Class A to Class B next season if the new football classification plan is approved.

“Now I have people from 15 different states that have come on at one time or another. And our group has grown to include not only athletic directors but coaches, we have probably had a dozen certified athletic trainers, superintendents of schools, assistant principals," Stevens added,

While Maine canceled its spring season, Iowa actually played baseball and softball at the high school level. Starting the season in May, ending in July, which is only a few weeks after the spring championships normally end.

Scott Garvis, an athletic director from the midwestern state was a key guest in these meetings. Helping inform his Maine colleagues on what guidelines and principals Iowa put in place.

David Utterback is the athletic director at Brewer High School and a member of the task force. Over the summer he's been vocal about doing anything it takes to have a fall season, even moving sports seasons around.

Utterback mentioned in June that having to cancel back to back seasons would be detrimental for his student-athletes, and he isn't talking about winning games or championships.

“(We need to) understand that social and emotional aspect of what athletics mean to kids and even the connection to the school. The reality is that there are a lot of kids that need that tie to the school to even get them to do school work," he said.

Another fear Utterback mentioned two months ago and is only growing now is losing high school athletes.

Kids haven't stopped playing sports because of this pandemic, they're just not doing it with their school uniform on.

Club and travel teams are still participating in games and tournaments and many high school athletes have already begun unofficial, captains' practices where the team gets together to scrimmage and play their respective sport with no coaching presence allowed.

If fall sports can't be played at the high school level then top athletes, or any for that matter, may elect to be done with the system and branch out on their own to play somewhere independently.

RELATED: Baseball is back for Maine teenagers

Burnham mentioned the MPA has looked at other states and other community sports programs to see what guidelines were used.

The MPA will have its seasonal Media Advisory Meeting Wednesday when more questions on the fall sports decisions will be asked.