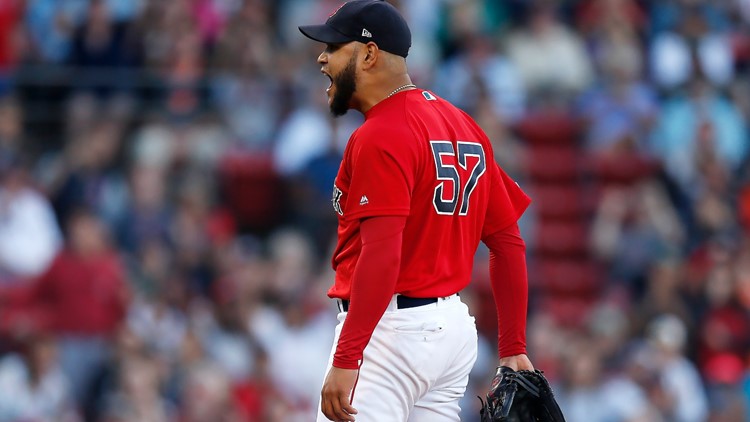 Photo by: AP Photo/Michael Dwyer
Boston Red Sox's Eduardo Rodriguez reacts after he struck out Baltimore Orioles' Richie Martin swinging during the seventh inning of a game in Boston on Sunday, Sept. 29, 2019.

BOSTON — Eduardo Rodriguez missed out on a 20-win season when Boston's bullpen blew a late lead, but the Red Sox overcame a soaring home run robbery by Stevie Wilkerson to beat the Baltimore Orioles 5-4 in the regular season finale Sunday on Mookie Betts' ninth-inning dash home.

Betts scored from first on a single by Rafael Devers with no outs. Devers' hit caromed off shortstop Richie Martin's glove, causing Wilkerson to hesitate in right. Betts beat a late throw by Wilkerson to give the defending World Series champions a celebratory cap to a disappointing season.

Wilkerson made a late entry for catch of the year in the eighth. He chased Jackie Bradley Jr.'s fly ball to the edge of the visitors' bullpen, leaped over the short wall and pulled back Bradley's would-be homer while nearly tumbling into the seats.

Brandon Workman (10-1) pitched one inning and struck out three to pick up the victory. Dillion Tate (0-2) got the loss for Baltimore (54-108), which was denied its first sweep of the season.

Rodriguez pitched three-run ball for seven innings and was pulled with Boston leading 4-3, putting him in line for a career-high 20th win.

Baltimore's Hanser Alberto reached on an error by shortstop Xander Bogaerts leading off the eighth and scored the tying run when Jonathan Villar singled off Matt Barnes.

Boston finished 84-78 a year after winning a franchise-record 108 games during the regular season. The Orioles made a six-game improvement from 2018.

The Red Sox are the 10th team since 2000 to win the World Series and not qualify for the postseason the following year. No team has repeated as champions since the New York Yankees won three straight titles from 1998 through 2000.

While this season is something for the Orioles to build on, the Red Sox trudge into an offseason that promises to bring several changes.

There will be a new leader in baseball operations following the firing of Dave Dombrowski. All-Star slugger J.D. Martinez must decide whether to exercise a player option. Starter Rick Porcello is a free agent.

Controlling owner John Henry has also vowed to cut back after having baseball's highest payroll for two straight seasons. Boston is on track to pay a $13 million luxury tax this year on a payroll of $243 million.

Manager Alex Cora, who ownership said will return for a third season no matter who replaces Dombrowksi, said identifying what went wrong in 2019 isn't hard to put his finger on.

Cora said inconsistent pitching, inflated offensive numbers and an eight-day stretch from July 28 through Aug. 4 that saw Boston lose eight straight games - five to the Yankees and three to the Rays - will gnaw at him.

Boston was eight games out of first place in the AL East before that stretch and 14 1/2 out by the end of it.

There were some flashes of last year's success at times, but that on far too many instances the consistency wasn't there offensively or defensively. The Red Sox hit more home runs and scored more runs than in 2018, but poor baserunning and injuries on the pitching staff doomed the club in close games.

On the mound, starters Chris Sale and David Price made only 25 and 22 starts, respectively, as Sale battled elbow issues and Price dealt with elbow and wrist problems.

Firming up the starting rotation and bullpen are areas that ownership has also said will be addressed this summer.

Red Sox: Cora said Sale (left elbow inflammation) will head to their spring training facility in Ft. Myers, Florida, in the next few days to begin his rehabilitation program.

Orioles: Opening Day for next season is set for March 26 against the Yankees.