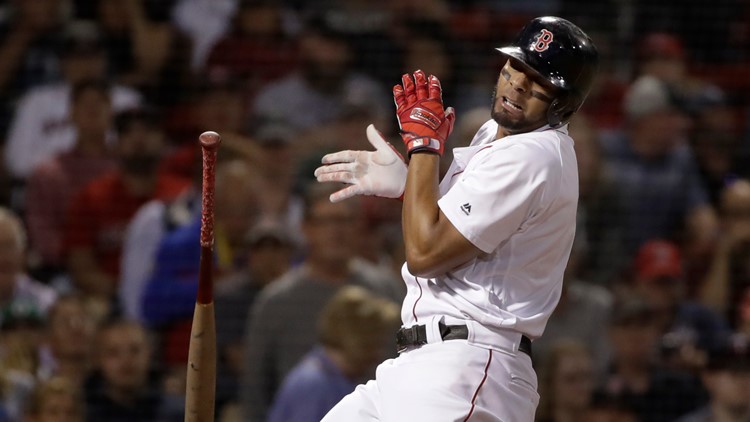 Photo by: AP Photo/Elise Amendola
Boston Red Sox's Xander Bogaerts spins away from an inside pitch during the fifth inning of the team's baseball game against the Minnesota Twins at Fenway Park, Tuesday on Sept. 3, 2019, in Boston.

Jake Cave added a two-run triple for the Twins, who won for the ninth time in 10 games and improved to 7-1 on a 10-game trip. Minnesota extended its major league record to 271 homers with nearly four weeks left in the season.

With Cleveland's loss to the White Sox, Minnesota extended its lead in the AL Central to 6½ games over the Indians. The Twins also dealt a setback to Boston's slim postseason hopes with just 24 games remaining.

Rafael Devers and Andrew Benintendi homered for the Red Sox, who struggled against a parade of relievers and couldn't rally all the way back after falling behind 6-0.

Six Twins pitchers combined on a six-hitter, with only four hits allowed before Benintendi's two-out homer in the eighth off Taylor Rogers.

Rogers returned for the ninth and got his 23rd save, striking out Devers for the final out with the tying run at second.

Rick Porcello (12-11) struggled from the start, allowing one run in the first and two more in the third on Cave's triple to center. Porcello's night ended in the fifth after Cruz hit his 35th homer and Sanó went deep two batters later for a two-run shot that put the Twins up 6-0. Sanó's shot was his 27th.

The Red Sox struck out 12 times and went 1 for 9 with runners in scoring position.

Twins: C Mitch Garver was out of the lineup a day after a pitch deflected off his glove and struck him in the jaw, causing him to leave a win at Detroit in the fourth inning. ... Minnesota bolstered its bullpen by recalling RHPs Ryne Harper, Trevor Hildenberger and Fernando Romero from Triple-A Rochester.