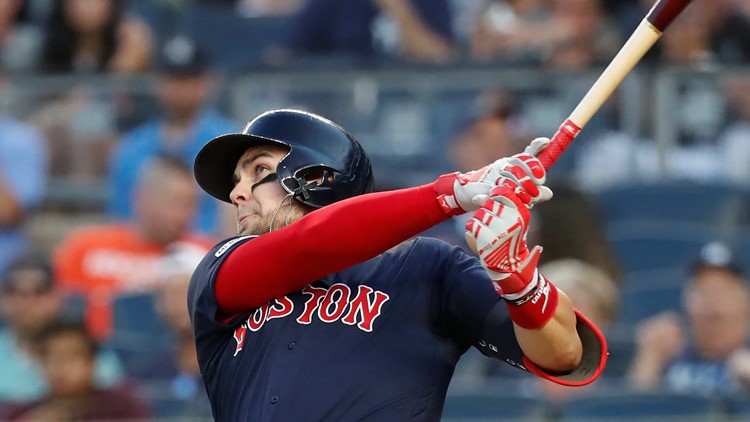 Photo by: AP Photo/Kathy Willens
Boston Red Sox Michael Chavis bats in the second baseball game of a doubleheader against the New York Yankees on Saturday, Aug. 3, 2019, in New York.

M.C. is the emcee of Sea Dogs Hot Stove Dinner

SOUTH PORTLAND, Maine — Two years after first coming to Maine as an untested rookie, Michael Chavis is set to return as a Red Sox hero.

Chavis answered the call when the Portland Sea Dogs went looking for a big name to headline its annual Hot Stove Dinner. The banquet takes place January 15 at the Portland Sheraton at Sable Oaks in South Portland.

Maine baseball fans first got to know Chavis when he joined the Sea Dogs in 2017. By the end of the season, his hitting at both the Single- and Double-A levels (.282 AVE, 31 HR, 94 RBI) earned him the title of Red Sox Minor League Offensive Player of the Year.

His production didn't stop upon entering the big leagues in 2019. The 18 home runs and 58 runs batted in that Chavis hit were the most by a Red Sock in his debut season since Ellis Burks in 1987.

All of that star power has sold a lot of tickets over the years. The money raised at the dinner goes to the Sea Dogs' Strike Out Cancer in Kids initiative which benefits the Maine Children's Cancer Program. The Sea Dogs have contributed nearly $5 million to the program over 25 years.

In addition to a meal and speeches, the Hot Stove Dinner also includes a silent auction. The Sea Dogs say Michael Chavis is the first of several big names who are being courted for the guest list.

Tickets to the Hot Stove Dinner went on sale Wednesday, Nov. 13 through the Sea Dogs' website.