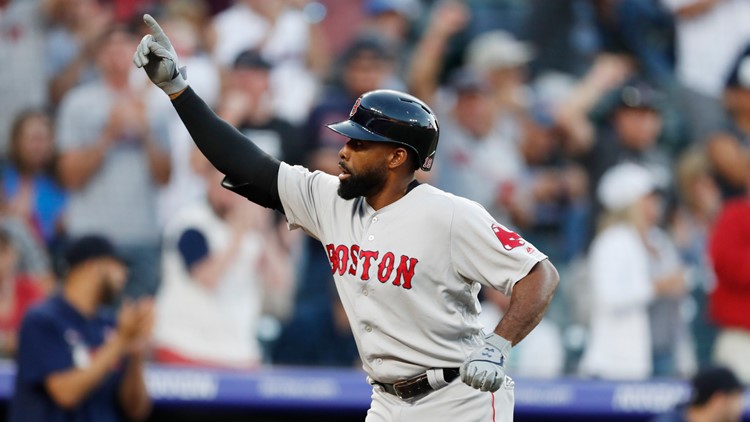 Photo by: AP Photo/David Zalubowski
Boston Red Sox's Jackie Bradley Jr. gestures to the crowd as he circles the bases on a solo home run off Colorado Rockies starting pitcher Rico Garcia during the second inning of a game on Tuesday, Aug. 27, 2019, in Denver.

DENVER — Jackie Bradley Jr. opened Boston's three-homer night with a solo shot into the third deck, and the Red Sox beat the Colorado Rockies 10-6 on Tuesday.

Bradley's estimated 478-foot blast in the second inning was the seventh-longest this season, according to Statcast. It gives Coors Field four of the top eight homers by projected distance in 2019.

Rick Porcello (12-10) threw five solid innings and allowed two runs. He improved to 23-10 in his career against NL teams.

Colorado outfielder Sam Hilliard had a two-run homer in his major league debut. Nolan Arenado added a two-run homer in the ninth for the Rockies, who played their 2,000th regular-season game in Coors Field history. The Rockies have gone 1,099-901 in the regular season since the first game at Coors on April 26, 1995 - a walk-off win over the New York Mets.

Rico Garcia (0-1) struggled with his command in his first big league start. He walked five over five innings and allowed six runs. The right-hander was filling in for German Márquez, who was placed on the injured list Monday with inflammation in his forearm.

Garcia was a 30th-round pick in 2016 out of Hawaii Pacific University. Born in Honolulu, he caught the attention of manager Bud Black during spring training for his pitching, of course, and for bringing Hawaiian snacks.

The 25-year-old Garcia bounced between Double-A Hartford and Triple-A Albuquerque this season. He found his way into the Rockies rotation after an array of injuries to Jon Gray (left foot fracture), Márquez and Kyle Freeland (strained groin).

Red Sox: LHP David Price (wrist injury) threw three innings of a simulated game. He could be in line to start during the next series at the Los Angeles Angels, manager Alex Cora said.

Rockies: Márquez called the decision to put him on the injured list precautionary. "Better for me to rest it," he said.

Hilliard was removed from his game with Triple-A Albuquerque after the fifth inning Monday by manager Glenallen Hill.

"He pulled me over and said, 'Hey, what do you think about your effort level on that popup to left field?'" Hilliard recounted. "I said, 'It was good. I ran hard.' He goes, 'I've got to take you out.' I got really upset. I thought I was getting pulled for a lack of effort."

Following the game, Hill called Hilliard into his office and revealed the real reason - he was being promoted.

"It was the longest four innings of my life," Hilliard cracked.

Red Sox second baseman Dustin Pedroia visited his teammates in the clubhouse before the game. He's recovering from his latest surgery to his left knee.

"Just being around them for a few days is nice," Pedroia said.