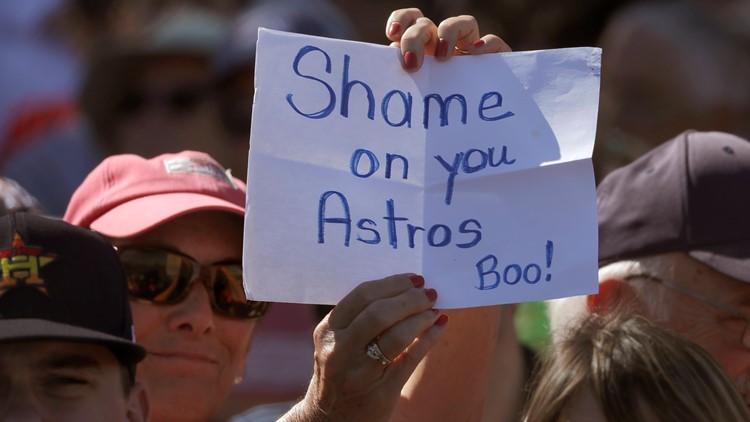 Photo by: AP
A fan holds a sign during a spring training baseball game between the Houston Astros and the Washington Nationals Sunday, Feb. 23, 2020, in West Palm Beach, Fla. (AP Photo/John Bazemore)

MLB tells court attempts at cheating are a part of sports

NEW YORK — Major League Baseball (MLB) is urging a federal judge to dismiss a lawsuit by fantasy contestants over sign stealing by the Houston Astros.

Five men have sued MLB, MLB Advanced Media, the Astros, and the Boston Red Sox in federal court in Manhattan, claiming fraud, violation of consumer protection laws, negligence, unjust enrichment, and deceptive trade practices by teams that violated MLB's rules against the use of electronics to steal catchers' signs, the Associated Press says.

MLB says attempts at cheating are part of sports.

"Rules violations -- large and small, intentional and unintentional, technical and game-changing -- are a never-ending source of sports television, talk radio, web and elevator commentary by sports pundits and fans alike," MLB said Friday in papers submitted to U.S. District Judge Jed Rakoff. "And fans' general awareness of the potential for infractions is underscored in this case by the fact that clubs were publicly disciplined for electronic sign-stealing violations during the 2017 regular season."

According to the Associated Press, Manfred is also investigating allegations against the Red Sox.

In its papers, MLB cited a 2010 opinion by Judge Robert Cowen for a 3rd U.S. Circuit Court of Appeals panel that upheld the dismissal of a suit by a New York Jets season-ticket holder against the NFL, New England coach Bill Belichick and the Patriots over the Spygate scandal.

"It appears uncontested that players often commit intentional rule infractions in order to obtain an advantage over the course of the game," Cowen wrote.

MLB said "plaintiffs got exactly what they bargained for: contests determined by baseball players' actual performance on the field, whatever the contributing factors, predictable or unpredictable, may have been" and added, "not one plaintiff claims to have lost any fantasy baseball contest as a result of sign-stealing or otherwise."