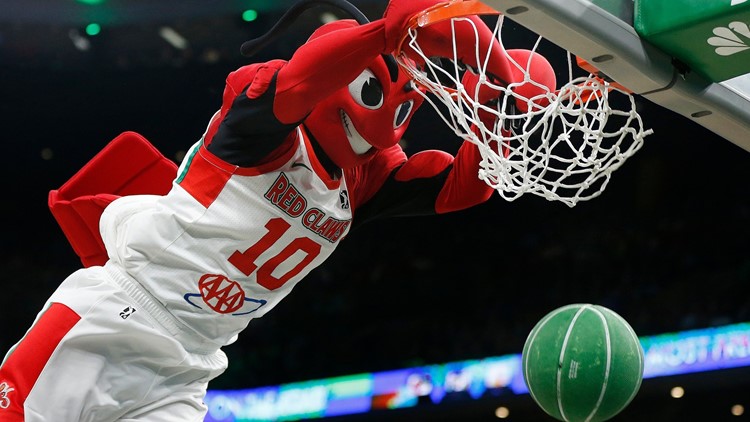 Photo by: AP Photo/Michael Dwyer
The Maine Red Claws mascot performs a trick during the first half of an NBA basketball game between the Boston Celtics and the Atlanta Hawks in Boston, Saturday, March 16, 2019.

The acquisition was announced Tuesday morning, October 15, at a joint press conference at the Portland Expo Building where the team plays their home games.

Officials said the team will stay in Portland and there will be no disruption to the current Red Claws staff, though it may be augmented.

Ryan would not disclose the price tag that the Red Claws sold for but said it was important that whoever bought the team was community-oriented.

Ryan said he was thrilled that the Red Claws, who debuted in 2009, was sold to one of the "most storied professional sports organization in the world."

"We are already proud of what we do but I think you will see something even better," Ryan said.

President of the Celtics Rich Gotham said the shamrock team will bring resources, expertise and brand equity to the Red Claws.

Fifty percent of all players in the NBA once played in the G League, Ainge said. Buying the G League team solidifies the partnership that already existed between the Celtics and Red Claws and is seen as a direct move to invest in the Celtics future.

Gotham said the Red Claws fan base is great and that the Celtics will help it grow.

RELATED: Red Claws won't be seeing as much charity at the charity stripe