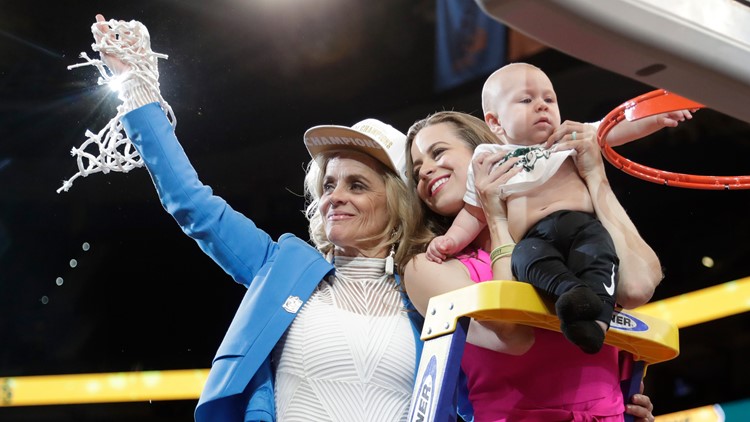 Photo by: AP
FILE - In this April 7, 2019 file photo Baylor coach Kim Mulkey, left, waves the net while standing with daughter and assistant coach Makenzie Fuller and Fuller's son, Kannon Reid Fuller, after the Final Four championship game of the NCAA women's college basketball tournament in Tampa, Fla. National champion Baylor has accepted an invitation to visit the White House next week. The school said Wednesday, April 24, 2019 that coach Mulkey and the Lady Bears are scheduled to be in Washington on Monday to celebrate their third national championship. They are expected to visit with President Donald Trump. (AP Photo/John Raoux, file)

CHICAGO — Baylor head coach Kim Mulkey was announced along with seven other basketball legends as a finalist for the 2020 class of the Naismith Memorial Basketball Hall of Fame.

The Hall of Fame Class of 2020 Announcement will take place Saturday, April 4 at 10 a.m. on ESPN from the NCAA Men’s Final Four in Atlanta. A finalist needs 18 of 24 votes from the Honors Committee for election into the Naismith Memorial Basketball Hall of Fame.

The class of 2020 will be enshrined during festivities in Springfield, Mass., the "Birthplace of Basketball" on Aug. 28-30.

Mulkey remains as the only person to win an NCAA national championship as a player, assistant coach and head coach. She has taken her Baylor Lady Bears to three NCAA championships (2005, 2012, 2019), four Final Fours, and she’s won a combined 20 regular season and Big 12 tournament championships.

She has earned seven National Coach of the Year Awards and seven Big 12 Coach of the Year honors in her time at Baylor. Since the 2010-11 season, Mulkey has led Baylor to the second-best winning percentage in NCAA women’s basketball, trailing only UConn.

The Lady Bears are 334-24 in that span for a .933 winning percentage while UConn is at .946. The separation after Baylor and Huskies is 55 percentage points lower with Notre Dame at .877.

Mulkey ranks third all-time in winning percentage at .856 and second among active coaches. She is the first person, male or female, to win a national championship as a player, assistant coach and head coach.

Mulkey enters Saturday’s game with Oklahoma State at 598-100 in her 20 seasons at the helm at Baylor. If she can achieve her 600th win in the next five games, she’ll be the fastest NCAA Division I coach, man or woman, to reach the milestone.

RELATED: 'Big' lineup came from nowhere, but will likely stick around for Lady Bears