'I can’t wait for the crowd': Maine high school athletes are ready to take the field 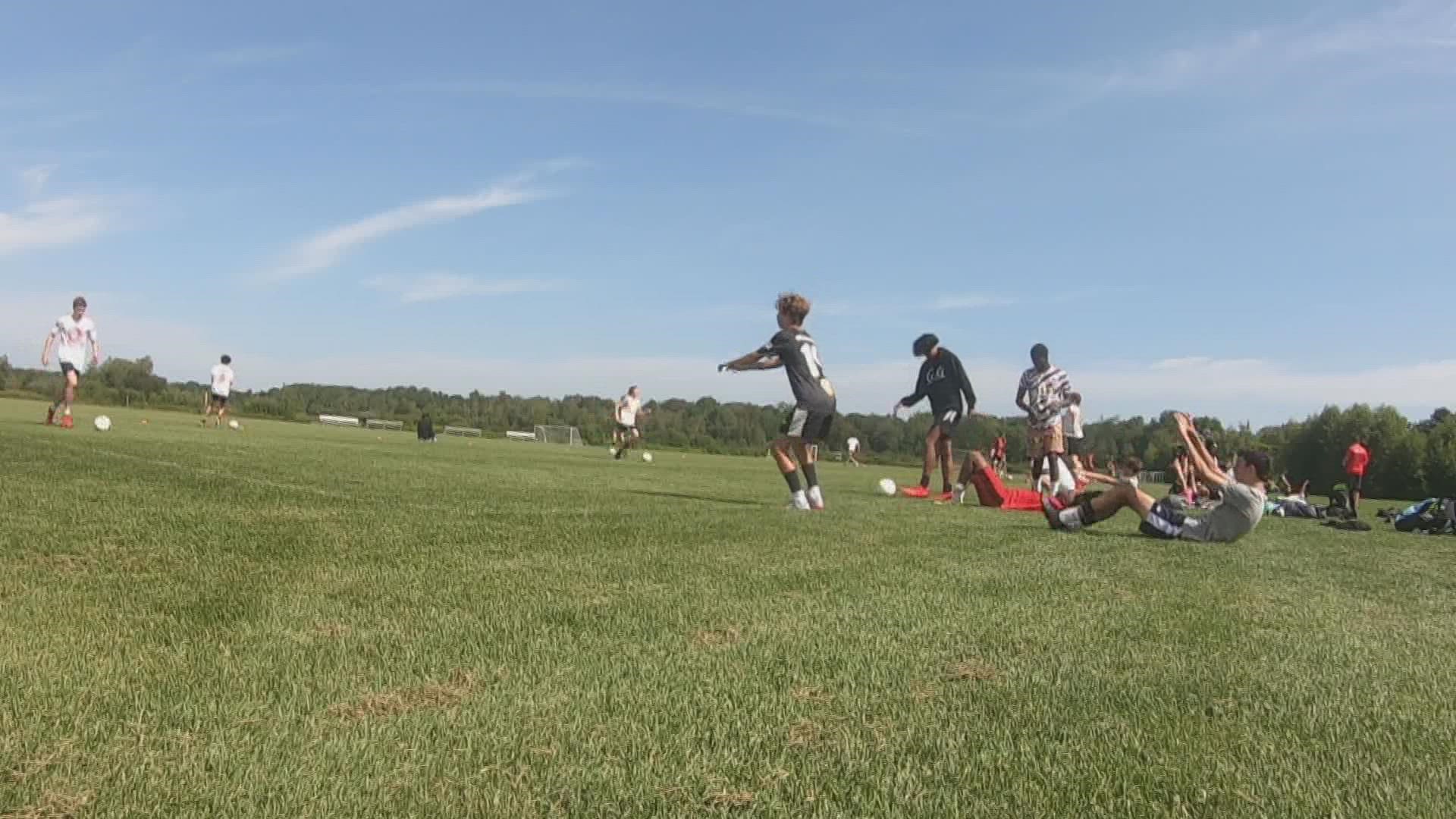 SOUTH PORTLAND, Maine — This time last year, a large percentage of Maine high school student-athletes stayed on the sidelines as their friends who played soccer, field hockey, cross-country, or golf played on.

No tackle football or indoor volleyball in the fall of 2020 was a nightmare for many of those players. Yes, there was a modified seven on seven touch season for football, and some schools participated in modified volleyball seasons, but it wasn't the same.

Now, every student-athlete on every sports team in Maine is in the middle of their first week of practice and will have a chance to win a state championship in a few months.

“It’s great to be back with the team and everybody," Thornton Academy quarterback Jack Emerson said after practice Tuesday. “Everybody loves to be back here with everybody, it’s great.”

It was definitely a different offseason for head coach Kevin Kezal, who has led the Trojans for more than 20 seasons.

“It’s unique because when you start creating your depth charts, you’re not sure, you have to start somewhere," he added.

Many of Kezal's seniors, including his quarterback and captain Emerson, have had little to no varsity experience. Every coach around Maine is in a similar situation. All returning seniors and juniors last put on pads when they were sophomores and freshmen.

“Just listen guys, we’re going to be patient as a staff, but we need to make sure we get a little bit better each and every day," Kezal added.

On Tuesday's morning session, Thornton Academy focused on defense, much to the delight of outside linebacker and senior captain Cody Ruff.

“Last year was a bit of a doozy, but we made the most of it, made sure we kept our skills tight and made sure our strategies were on point, and today we get to put it to action," Ruff said.“It’s going to be a grind, sometimes things are going to start slow, but we just keep working every single day.”

Both Ruff and Emerson can't wait for that first home game when the Trojans take against Sanford on Sept. 3.

“It’s going to be crazy, the atmosphere of that game. I‘m expecting it to be amazing because it’s going to be like a return in something we haven’t had in so long," Ruff added.

In South Portland, athletic director Todd Livingston also can't wait for home games to get going in a few weeks. He added those few hours down at the field, the court or the track are his favorite part of his schedule.

“This is probably going to be full on Friday night(s)," Livingston said referring to the football stands behind him. "Coming out here and watching the players play and the coach’s coach and interacting with the community is the best part of the job.”

A big part of Livingston and all athletic administrators' job last year was reworking and replanning COVID-19 guidelines.

“With that variant going around, it’s going to be interesting to see if that impacts us," he added.

As of now, the Maine Principal's Association said it will follow the U.S. and Maine CDC's recommendations. Assistant Executive Director of the MPA, Michael Bisson, said right now the only sport to be potentially affected is volleyball.

“Masking indoors is a recommendation," Bisson said Tuesday. “If the home school has a requirement that they have to wear masks in the building then they would have to as well. The officials and everybody.”

He said the MPA will be watching COVID-19 trends closely but he shared his excitement for the 'normal' fall season.

“There’s nothing that brings the community together like a Friday night football game, a soccer rivalry game, or a big field hockey competition," Bisson added. “People missed their high school athletes participating, that’s for sure.”

High school student-athletes will have a few more days of practice before they are allowed to scrimmage and then the first countable games for most fall sports teams can begin on Sept. 1.