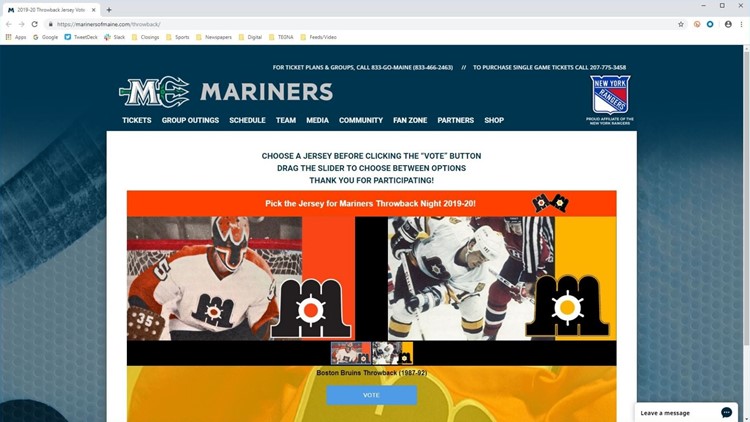 Photo by: Maine Mariners
Fans vote online to choose between two options for a throwback jersey that the Maine Mariners will wear for one game in the 2019-2020 season.

A throwback throwdown between orange and gold Mariners jerseys

PORTLAND, Maine — The Maine Mariners think their fans deserve a more vivid palette for their hockey memories than the usual bland sepia tones.

For one game in upcoming 2019-2020 season, the Mariners plan to outfit their players in throwback jerseys with the logo and color scheme from earlier iterations of the team. Fans will vote to decide between two color options.

In a nod to history, the Maine Mariners traded in their modern blue uniforms for one night on January 5, 2019, and instead wore the orange jerseys from their earlier iteration as an affiliate of the Philadelphia Flyers.
Maine Mariners

The original Mariners franchise was affiliated with the Philadelphia Flyers in its 1977 debut. Their orange uniforms were designed to match the parent club. Even after the affiliation switched to the crimson-clad New Jersey Devils in 1983, the Mariners still wore orange.

When the Boston Bruins acquired the Mariners as their affiliate in 1987, the junior squad's uniforms were given a golden makeover.

The Mariners name and logo went dormant after the 1992 season when the franchise moved to Providence. Decades passed before a new franchise revived the name last year with an updated logo and blue uniforms to reflect its affiliation with the New York Rangers.

The original orange jerseys made a comeback for one game last January at the Mariners' home ice at the Cross Insurance Arena in Portland. Fans were so enthusiastic about the nod to history that the team decided to swap jerseys again next season.

For the second Throwback Night, the uniforms will be chosen by fans in an online poll through the team website. CLICK HERE TO VOTE for either the Bruins-era yellow jersey or the orange jersey from the Flyers/Devils era.

Voting ends at 9 a.m. on Monday, June 10. The Mariners will announce the results of the poll later this summer. The new hockey season begins in October.