The Rousseau family has been running hockey clinics and sports good sales in southern Maine for decades. Now they are hoping to return back to normal soon. 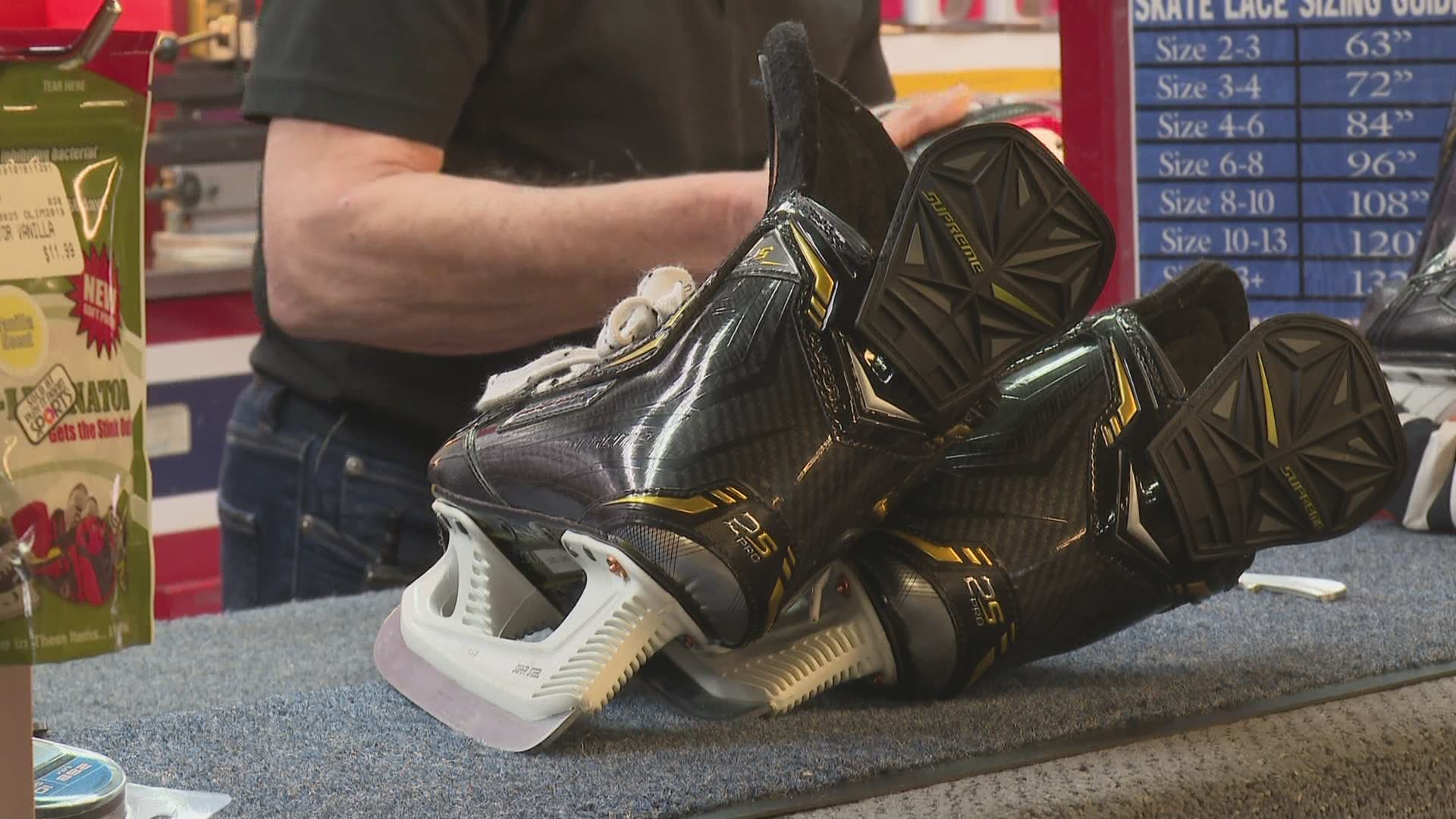 PORTLAND, Maine — The Play It Again Sports on Marginal Way in Portland is hiding hockey history inside. If you play the game, then you might realize it when you walk towards The Skate Shop in the back to get a fresh edge on your blades.

Behind the counter is Guy Rousseau. Guy has been sharpening skates since the family-run store opened, nearly 20 years ago.

“Doing what I dreamed to do," said Guy Rousseau in an interview with NEWS CENTER Maine back in March. "Talking hockey all the time."

Guy is from Asbestos, Canada where he was playing hockey at age 6. He met a woman named Dorothy from Lewiston at a wedding in Canada. Guy moved to Maine and they later married. While in Lewiston, he joined the Country Kitchen semi-pro hockey team as a forward.

Guy and Dot's four sons were surrounded by the sport from a young age and as his family grew, so did the impact they had on hockey in southern Maine.

After traveling to a tournament, Guy says he noticed the skaters from Connecticut and Rhode Island had better skills than players from Maine, and in 1986 he started a skills clinic with his oldest son Gary, which is still around today.

Rousseau's Hockey Clinic began in the Lewiston area. It has since expanded to Falmouth, Augusta, and Portland. According to its website, the Rousseaus have trained over 8,000 thousand hockey players, and that statistic was dated in 2016.

Guy primarily sticks to skate sharpening these days and leaves the coaching to his sons Gary and Scott, and grandchildren Adam, Erik, and Lauren. There are more Rousseaus in the wings ready to take on the family business.

“[The clinics] had brought the family so close together, and we do so much with hockey together, go on the ice, and I love it,” laughed Rousseau.

They have never seen a year quite like 2020. Two weeks into the spring clinic the state shutdown, and essentially hockey stopped in Maine due to the COVID-19 pandemic.

Guy had to temporarily walk away from skate sharpening, for his safety and health.

During the summer months, the spring clinic was able to finish and other clinics were able to get all of their skaters through before cases started to rise again in the fall.

Play It Again Sports in Portland and Biddeford were also affected. Skate sharpening turned curbside and sports equipment sales hinged on state guidelines for athletes returning to the field, court, or rink.

The pandemic is causing families to go months, or longer, without seeing loved ones. For a family run business, with grandparents and children in the mix, staying apart affected work and family life. This includes scores of volunteers and coaches that have been with the Rousseaus for years.

“One thing that the game has taught us, and our family hockey school has taught us, is how important family is, especially during times like these,” said Adam Rousseau, Guy's grandson.

The Rousseaus had occasions where they can safely gather, on the beach in the summertime and in the colder months, no surprise, it involved skating.

“In this pandemic, to find that little avenue to get together and skate together when we can, it’s been tough having to shut down," said Gary Rousseau, Guy's son.

Scott Rousseau retired Guy's number 5 jersey to the rafters until his dad can safely return to the store, a moment Guy is waiting for.

“I’m hoping things will quiet down and we’d be able to get to the store and do my thing and be with the family again," said Guy. "[I'm] waiting for the right time to go back. It’s been very difficult not to be apart of this beautiful game of ours.”