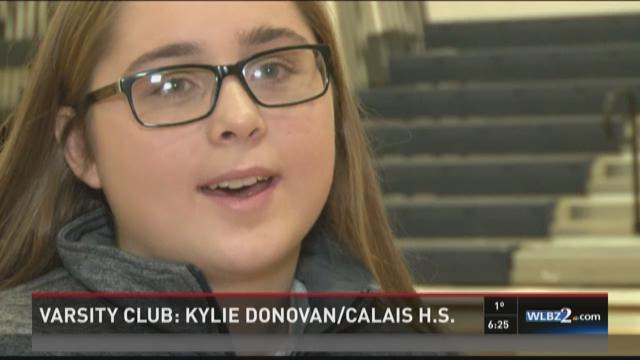 CALAIS, Maine (NEWS CENTER) - Few other high school seniors are busier than Kylie Donovan. The Calais High School student plays volleyball and softball, is number one in her class, is the vice president on the student council, and is also the president of her class.

"I have so much stuff to do," said Donovan. "I have more stuff to fo than I have any other year. And you know if you enjoy the stuff you do than it's not that hard to be involved and stuff."

Donovan is a leader in the classroom, the field, the court and on the stage. She has led the Blue Devils volleyball team to two state titles over the past two years and also has had a heavy influence on the school's band.

When the conductor of the band left, Kylie stepped up to teach her fellow band mates.

Kylie's will to help others does not go unnoticed by her teachers or peers.

”She works hard," said Calais Middle High School Principal Maryanne Spearin. "If there is something that is put before her as a goal she works hard and she encourages others to be there right along beside her, and she sticks with it until she is finished."

Kylie does not know where she wants to go to college yet but she has aspirations to one day become a psychologist.