Hampden Academy's Unified Sports Program was one of the top 34 programs in the country to make the list, the only school from Maine. 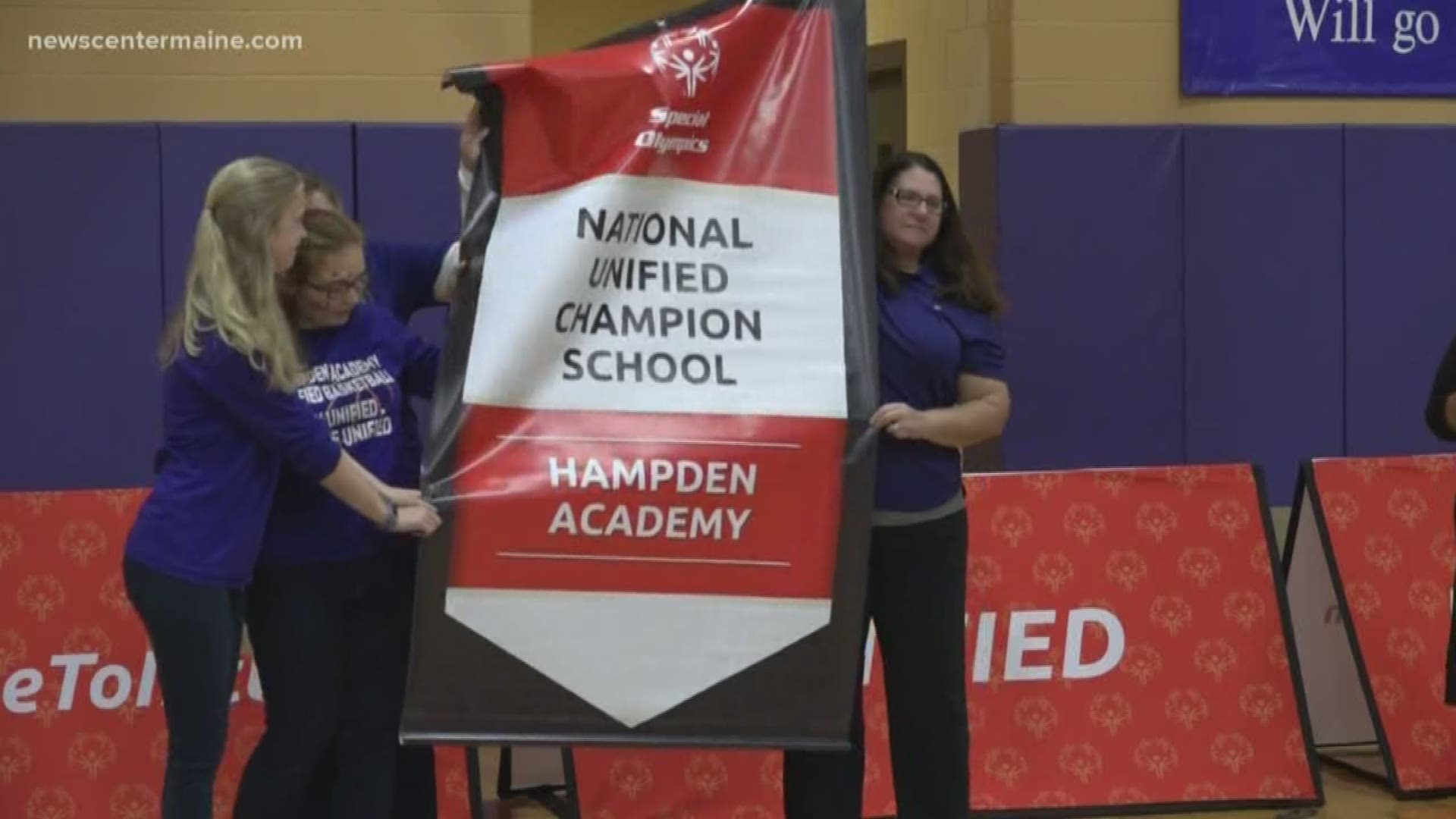 Students on Friday filled the school's gymnasium, which was decorated with banners celebrating athletic and sportsmanship achievements. The students dressed head to toe in purple and white and showed up to their homecoming pep rally ready to celebrate their school and community pride.

But there was one more banner to raised.

Hampden Academy's Unified Sports Program has risen to the top of the more than 6,500 programs of its kind in the country. Each year, ESPN announces its Special Olympics Unified Champion School honor roll, recognizing the top schools that excel at all the pillars in the program.

In 2019, 34 schools made the list, but only Hampden represented Maine. Hampden Academy is just the fifth school from Maine in the history of the Honor Roll to be recognized.

Lisa Bird from Special Olympics Maine has been watching this unified program since the beginning.

"We are beyond proud, it is so exciting for us, here in Maine, to have one of our schools presented on ESPN to say, 'Hey, in Maine they have some incredible schools and let's look at Hampden Academy, who really went above and beyond,'" Bird said with a smile.

Unified Sports are a new and unique way for all students to get involved in sports. The teams are co-ed and are made up of students who are abled and challenged. The goal is to get everyone involved.

"Kids who maybe ate lunch alone or sat alone in the hallway or walked the halls alone, now they’re getting high-fives from their classmates, they’re having other kids sit and have lunch with them," Bird added.

For Nick Raymond, the assistant principal, this award means everything.

"It’s heartwarming to see it, it’s wonderful to see our kids to involve one another and to really just embrace everyone regardless of their disabilities or challenges," Raymond said in his Bronco purple and white.

This award is a result of the hard work that the students, not just the faculty, put in to these programs, teams, and community efforts.

Rachel Gardella reflects on her time with the program.

"Unified basketball has allowed me to be friends with people who I may have not even known and it’s nice to walk through the hallways and see them and say hi, and the faces they give are priceless," she said.

The support for these teams reach far outside the halls of Hampden Academy, and even outside of the school district.

"I think the community has come out in droves to support our unified program, it’s nice to see people who are not involved in the school, who don’t have an affiliation with the school and they still come out and support out unified programs," Raymond mentioned.

Unified basketball and track are the two unified teams offered at Hampden, but Raymond said he has no problem adding more, as long as there is interest.

The Unified basketball team starts their season in January and the track athletes kick things off in the spring.