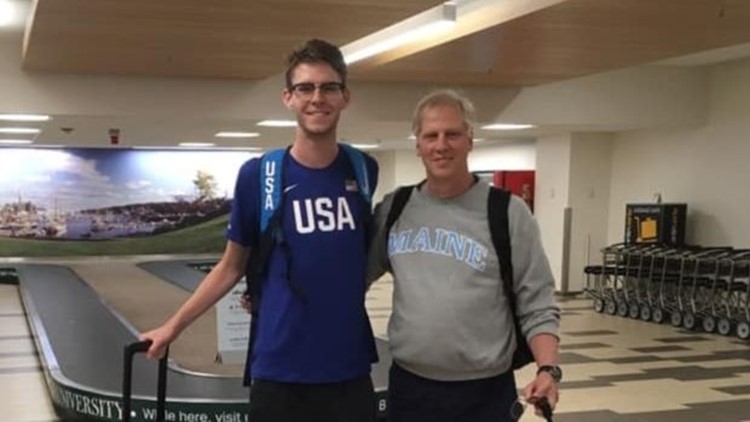 Augusta's Olivier to represent Team USA at Pan Am Juniors

ORONO, Maine — James Olivier hadn't run more than six miles in a single training session before the summer leading up to his first collegiate cross country season. Heck, he hadn't even raced the two-mile in high school, and was a school record-holder in the 400-meter, track's longest standard sprinting event.

But the Cony High School graduate entered his freshman year at the University of Maine last fall with an open mind and high hopes. That receptivity, combined with a coach's knack for sculpting talent from potential, has already paid off.

Last Sunday, the 19-year-old three-sport athlete punched his ticket to the 2019 Pan American U20 Athletics Championships in San Jose, Costa Rica, winning a national junior title at the USATF U20 Championships in Miramar, Florida.

Olivier will represent Team USA, and Maine, on the world stage next month.

Born and raised in Augusta, Olivier is a rising sophomore kinesiology and exercise science major. He works three summer jobs — Maine Veterans' Homes in Augusta, a Thai restaurant and coaching summer track — is basic life support-certified and was one of the Black Bears' 2018 Rising Stars.

When he received UMaine head coach Mark Lech's summer training regiment, which called for a log of 48 miles per week, he was a bit shocked. That's six miles Monday through Saturday with a 12-mile Sunday long run. "It was a rude awakening," Olivier said. But he adapted. And by the time cross began, he was prepared, able to motivate himself to get through a 25-minute workout, and aided by a focused environment in which his dorm roommate was also a teammate.

Olivier opened up with a solid cross country season, debuting at 28:33 – about 5:44 mile pace – at a home dual meet against Army in late August. Two months later, in only his fifth cross race ever, he ran 2 minutes faster placing 53rd at conferences. His 26:33, about 5:20 pace, ranked fifth among all freshmen.

The decision for Olivier to run cross, of course, was to prepare him for the track season, to establish a base and mileage from which he could launch.

And boy did he lift off.

Previously, back at Cony, his fastest open 800 had been a 2:10. But a 400-meter PR of 51.1 showed promise in a longer event, given the proper distance training. "Everything, for the most part, is predicated on leg speed," Lech said.

Following a mile-relay double in the team's home opener against New Hampshire, Olivier took the track at Dartmouth's Leverone Field House seeded dead last at 2:01. With nothing to lose, he sat behind the leader for the first three laps, then absolutely tore the roof off with a lightning-fast kick, making up 30 meters in the fourth lap with a 25-second final 200. Time: 1:57.58.

He finished sixth overall, but it was the first instance he'd ever broken the elusive 2-minute barrier, and he did it on a flat track, known for hindering speed.

Lech said Olivier likely could've run the 1:57 in a workout.

"The fitness was there," he said. "[Olivier] just had to acquire more confidence in himself. Racing is the biggest part."

That particular 800-meter race, in which he held on despite opening with a blistering 25.63, advanced him as the eighth of nine qualifiers. He'd finish sixth in the final, but his prelim time opened a door he'd enter three months later: the 1:50.16 was 1.38 seconds under the USATF U20 standard of 1:51.54.

A nagging foot injury would manifest shortly after IC4As, Olivier said. He'd open up his first collegiate outdoor season with a solid 1:52-flat in Alabama, and remain sub-1:54 throughout the season, but was initially unsuccessful in dipping back into the 1:50 range. He'd miss the conference final by three-quarters of a second, and wasn't fast enough to qualify for the NCAA East Regional.

But the season wasn't over.

At USATF Juniors, he found his stride again, clocking a 1:52.21 in the slower of two prelim heats, his best time since the first meet of the season and the fifth-fastest among the eight final qualifiers. He posed for a photo after with Lech.

Note the white hat. Not exactly a common sight to see during competition, especially in a mid-distance event, but it has been done at the Olympic level. American Dave Wottle won gold in the 800-meter at the 1972 Summer Games in Munich, Germany, running near-perfect even splits and blazing by the field in the final stretch as they slowed down, all while wearing a now-iconic white hat. It was Team USA's eighth Olympic title in the event, and remains its only since.

With his mother and aunt in attendance for Sunday's final at Miramar Ansin Sports Complex, Olivier executed he and Lech's race plan to a T, hitting near-even splits — high-26, 27, low-28, low-28 — staying on the outside shoulder as to avoid getting boxed in. He made a move with about 475 meters to go, going from seventh to second, and then took a commanding lead in the final 100.

Runner-up Darius Kipyego, a sophomore prep school student in Rhode Island, also qualified for the Pan American Juniors with his 1:51.26.

Olivier told NEWS CENTER Maine he was glad he had the extra time to find his stride again. In a post-race interview with RunnerSpace, Olivier explained that watching Lewiston's Isaiah Harris win last year's NCAA title for Penn State in 1:44.76 was "the biggest thing," and that Harris later gave him advice on how to prepare his mental game, where he was lacking majorly, he said.

"I was able to put it all together and run real close to my PR today," he told RunnerSpace. "I ran it exactly how I wanted to run it, nothing changed.

"I don't even have a state title to my name, I have a 4x8 title with my team," he said. "I was not a high school standout, I was given a shot by [Lech], he put me on a strict training regiment. I've trained every single day for the past year at the most intense level that I could tolerate, and it's gotten me to this position where these races, they mean a ton … it's been a crazy ride."

"He just had to believe that he could do it," Lech told NEWS CENTER Maine. "I knew when he came in he was able to run the distance pretty well and push himself to a high degree. As long as he could believe in what he was doing, and complete the workouts I was providing, I knew he could be successful."

Olivier said he's going to treat the international event with the same expectations as he did with the national meet, and said representing Team USA has always been a dream of his. Lech won't be making the trip to Costa Rica, but his workout guidance will continue as Olivier throws on a different team's singlet.

What's next after the meet?

Well, Olivier begins training for the 2019-20 season, maybe after a short break. He hopes to remain injury-free, and believes he and Lech have found a good workout-to-mileage ratio that, if maintained, will help in being preventative.

Asked how fast he can get, Lech believes Olivier has the potential capability to hit 48 seconds in the 400-meter and 1:47 in the 800-meter. But perhaps Olivier's next test could be the mile race, the next progression in distance. Given his performances thus far, Lech thinks Olivier may eventually break 4 minutes.

A far cry from his sixth-grade fitness test mile of 6:20-something.

Olivier will be the third athlete with UMaine ties to run for Team USA in the last year — men's mile school record-holder Riley Masters took silver last August in Toronto at the 2018 NACAC Championships, and women's school record-holder Corey Conner placed 39th earlier this month in Miranda do Corvo, Portugal, at the IAU Trail World Championships. Masters and Conners, who were both coached by Lech, also hold school records in the indoor 3K and outdoor 5K and 1,500-meter. Additionally, Conner has the indoor 5K and outdoor 10K.

His 800 PR is already the ninth-fastest among Maine natives to run the event. The top two: Harris, whose 1:44.42 placed him sixth at the 2016 U.S. Olympic trials, and Kennebunk's Erik Nedeau, who was also coached by Lech, at Northeastern. Nedeau's 1:46.19 got seventh at the 1992 U.S. Olympic trials.

At the time Nedeau was a collegian, Northeastern was part of the America East Conference. His 1:48.51 is still an outdoor conference record.

The 2019 Pan American U20 Athletics Championships will be held July 19-21 at Estadio Nacional de Costa Rica, and host 17 nations including Team USA.