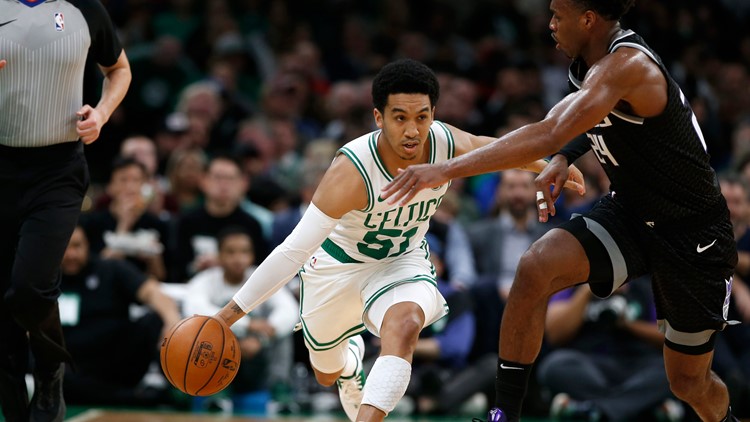 Photo by: AP Photo/Winslow Townson
Boston Celtics' Tremont Waters brings the ball up court against Sacramento Kings' Buddy Hield during the second quarter of a game on Monday, Nov. 25, 2019, in Boston.

Red Claws lose both Tremont Waters and their unbeaten streak

SOUTHHAVEN, Miss — The Red Claws found out what happens when you remove the spark plug that powers their offense.

Tremont Waters was that spark plug. After distinguishing himself in five games with the Red Claws, he was promoted to the Boston Celtics on Monday, November 25.

As a two-way player, Waters is contractually allowed to transition freely between the two teams at the G League and NBA levels. A spate of recent injuries opened a slot for Waters on Boston's roster.

Waters got his first taste of NBA action in the second quarter of the Celtics' game against the Sacramento Kings. His inexperience showed as he threw up an air ball in his first three-point attempt just nine seconds after stepping onto legendary parquet floor at the TD Garden.

Waters eventually turned his nervous energy to his advantage. In 20 minutes of playing time, he contributed seven points, three assists, two blocks and a steal. Every little bit helped the Celtics scratch out a 103-102 win.

The impact that Waters can have on a game was just as apparent by his absence from his old team. In their first game of the season without him Monday night, the Red Claws lost on the road to the Memphis Hustle, 119-96.

With Waters, the Red Claws went undefeated for five games. Without him, the Claws not only lost for the first time, they also posted their lowest point total of the season. It didn't help that they were facing such a tough opponent in Memphis which had won all six of its previous games.

RELATED: Opening home 'stand' lives up to its name by bringing Red Claws fans to their feet

A glance at his statistics shows Waters's importance to the Red Claws' offense. He led the team with 101 points over the first five games with a per-game average of 20.2 points. Waters had been riding such a hot streak that he was named the G League Player of the Week just hours before making his NBA debut.

As the Red Claws' remaining two-way player, Tacko Fall will take on increased responsibility to lead the team. He stepped up his game immediately against the Hustle by setting a team record with 14 offensive rebounds. He added another four boards on the defensive end to go along with 16 points for a double-double.

The next chance for the Claws to regain their winning stride will come on Wednesday when they travel to North Carolina to take on the Greensboro Swarm.