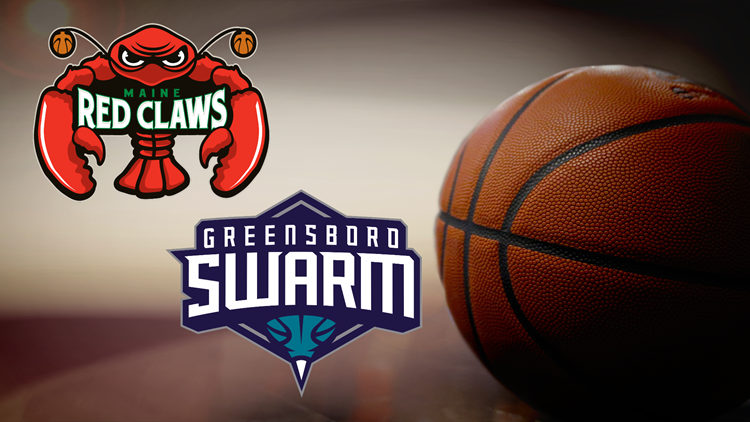 Photo by: NEWS CENTER Maine
The logos for the Maine Red Claws and Greensboro Swarm hover over a basketball court.

GREENSBORO, N.C. — The Maine Red Claws set the tone for overindulgence on the eve of Thanksgiving by breaking another scoring record.

At the end of their game against the Greensboro Swarm on Wednesday, November 27, the scoreboard flashed 155-131. Maine's winning tally is a new team record and the highest point total for any team in the G League so far this season.

Tremont Waters led the offense with 33 points. He was still riding the high of scoring seven points in his NBA debut with the Boston Celtics on Monday. By more than quadrupling that output on Wednesday, he set a new season high for scoring by a Red Claw in a single game.

Offense has been a strength for the Red Claws since the first game of the season on November 9 when they set the previous team scoring record by beating the Delaware Blue Coats, 148-125. Both times the Red Claws broke the record, they did it on the road in front of hostile crowds.

The Red Claws managed their latest win without the help of Tacko Fall. He won't be playing for 1-2 weeks after taking a bone bruise to his right knee at the hands the Memphis Hustle last Monday, November 25. At 7 feet, 5 inches tall, the void he leaves on the roster is especially huge. Like Waters, Fall is a two-way player, so his unavailability affects the Celtics as well as the Claws.

Fall's absence allowed some of his teammates the opportunity to shoulder a bigger share of the offense. The big dunk that Kaiser Gates unleashed to start Maine's scoring established a level of intensity that never waned. Wayne Blackshear had his biggest scoring game of the season with 20 points. And the 13 points and 10 rebounds posted by John Bohannon were good for a double-double.

Maine's offense has only faltered once in a 119-96 loss on November 25 to the Memphis Hustle. That's the game when Tacko Fall was injured. And the Red Claws were already shorthanded with Tremont Waters on loan for the night to the Celtics. Those handicaps made a tough matchup even tougher against a Memphis team with the best record in the G League.

RELATED: Opening home 'stand' lives up to its name by bringing Red Claws fans to their feet

Expectations will be running high as the Red Claws roll into Illinois to take on the Windy City Bulls with their modest .500 record. The game is set for 6 p.m. on Friday, November 29.