The 5 On Your Side Verify team examined what the candidates for St. Louis mayor said to check whether they told the truth about their records and each other 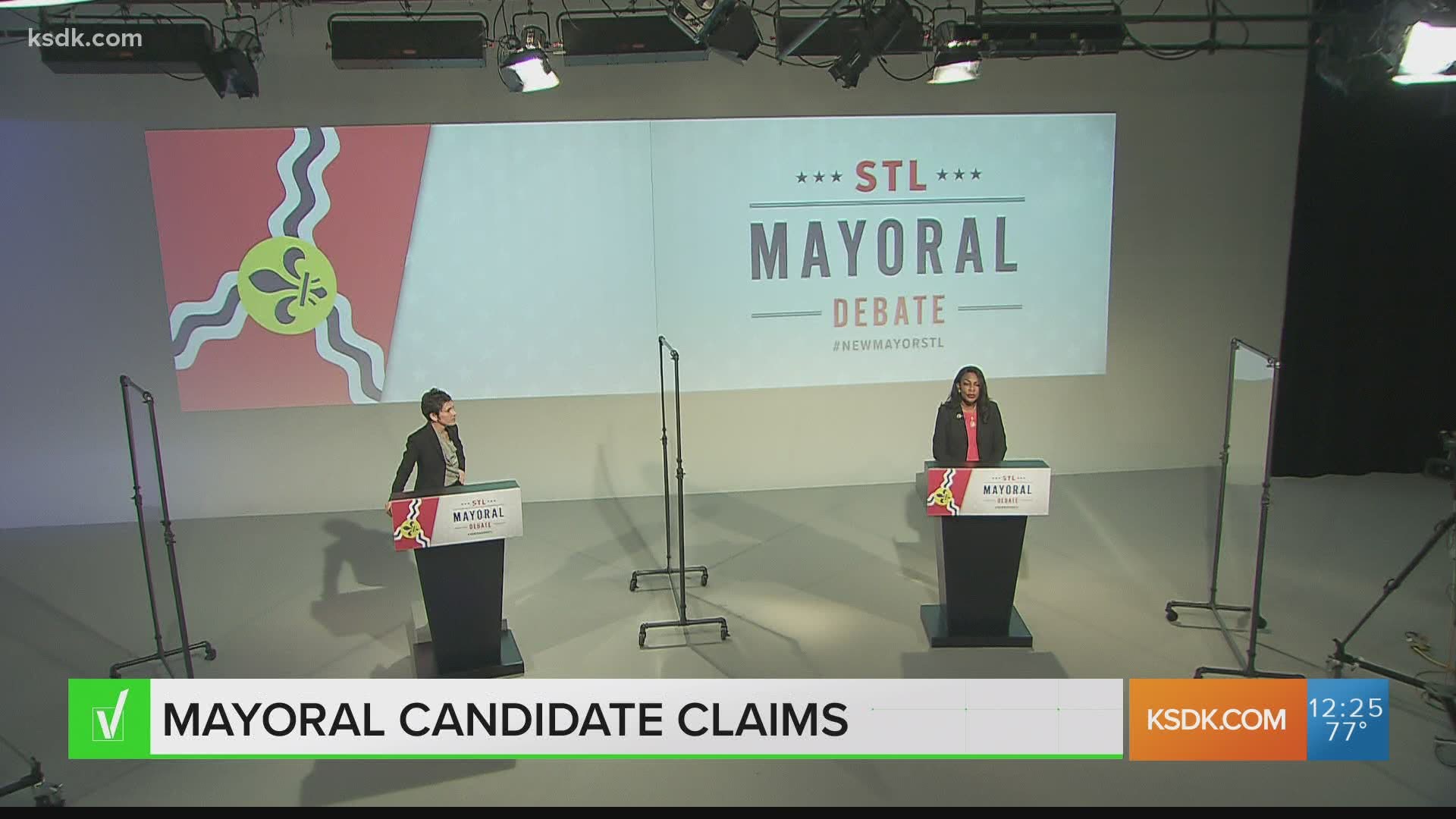 ST. LOUIS — In the final debate between the two candidates for St. Louis mayor, both Tishaura Jones and Cara Spencer made claims about how the other conducts the public’s business in their current roles. The 5 On Your Side VERIFY team checked a few of those claims as voters prepare to make their choice in the April 6 election.

Is it true that state audits show a “track record of issuing no-bid contracts”?

First, St. Louis City Alderwoman Cara Spencer mentioned in her opening remarks, and several times throughout the debate, that St. Louis City Treasurer Tishaura Jones has issued no-bid contracts through her office. She cited the state auditor’s office as the source of that claim.

A reading of the September 2020 audit for the St. Louis City Treasurer’s office finds support for that claim.

It confirms, "The Treasurer's Office did not solicit bids or proposals for purchases or services for 17 of the 26 expenditures” through June 2019 that the audit examined.

The total of those no-bid contracts was nearly $1 million.

The state auditor's report also gave the reasons they received from the treasurer’s office about why those expenditures were not bid.

The treasurer’s office stated some decisions, like legal representation, were based on expertise. Other contracts were handled by consulting firms that did the bidding, and the audit says some services would go through bidding later.

Want more political news delivered straight to your inbox? Sign up for our 5 On Your Side Politics newsletter.

Is it true that the state auditor gave the treasurer’s office “the second-highest rating on that audit”?

Jones defended her office after Spencer’s statements by stating that her office received the second-highest rating from the state auditor.

There are four rating levels in a state audit: Excellent, Good, Fair, and Poor. The treasurer's office received a rating of Good in September, which the audit says means, "The audit results indicate this entity is well managed."

The full report goes into more depth about what the auditor’s office found, stating, “For the areas audited, we identified (1) deficiencies in internal controls, (2) noncompliance with legal provisions, and (3) the need for improvement in management practices and procedures.”

Is it true that Cara Spencer “failed to report $13,000 in contributions to her own campaign,” resulting in an ethics filing?

Jones returned the criticism of Spencer by claiming that the alderwoman failed to report thousands of dollars in contributions to her campaign for mayor. According to documents on the Missouri Ethics Commission website, this is partly true.

Spencer’s campaign reported on March 29th that it received $13,351 in contributions from February 20 through March 1st this year.

But because those contributions arrived within 11 days of the primary, and because they were all more than $250 each, the campaign is required by state law to send a statement to the MEC within 24 hours of receiving each one.

That means the statement on the MEC website showing these contributions is between four to five weeks late.

A local lawyer and Jones supporter posted on Twitter that she was filing a complaint with the Missouri Ethics Commission about the contributions reported on March 29th.

But documents from the commission state that it does not accept ethics complaints against a candidate in the 15 days before an election, meaning the complaint will need to be submitted after the election to be investigated.

Is it true that the filings mentioned by Jones were "a day late"?

Spencer defended her campaign during the debate, saying “There was not a single contribution to my campaign that was not reported,” and “There was a small hiccup in the time in which it was reported.”

It is true that those contributions have now been reported to the MEC. However, when Spencer stated that Jones was “conflat[ing] a day late in filing a campaign contribution…with a failure to do fair and open bidding processes,” this statement could be misleading. The Spencer campaign’s statements to the MEC were not “a day late.”